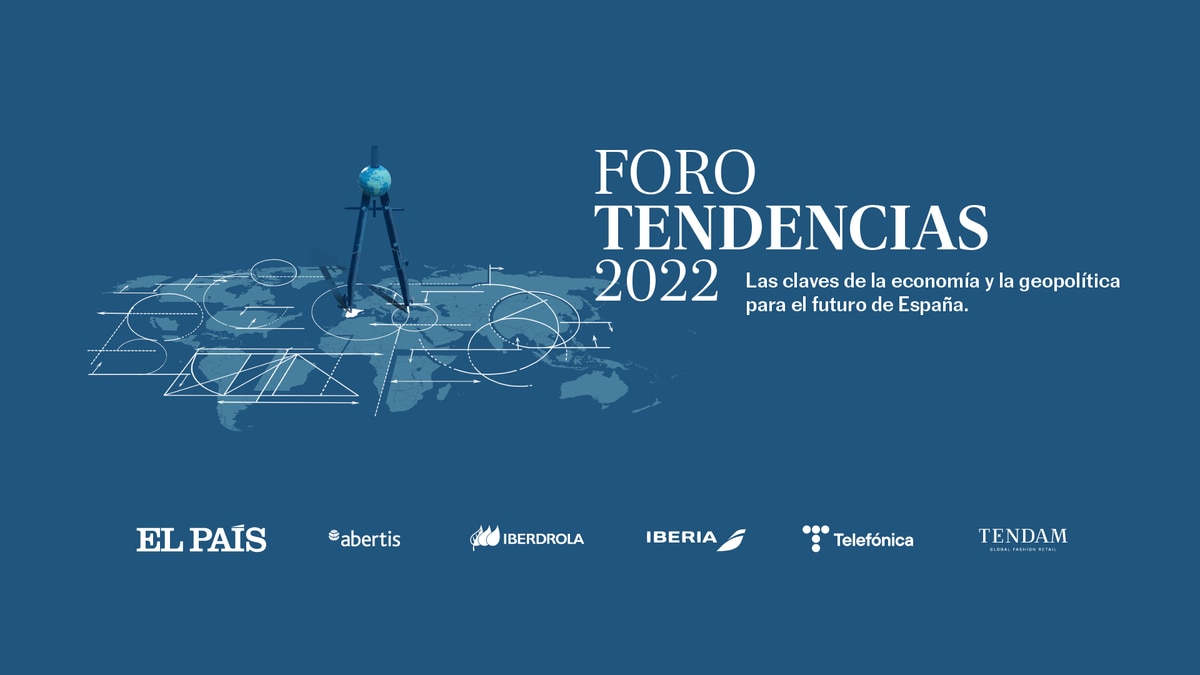 
Prominent personalities from the political and business sphere will be present this Thursday, June 24, at the fourth edition of the 2022 Trends Forum organized by EL PAÍS at the Fundación Telefónica Space. The event will be chaired by the King and, in addition, the event will be attended by José María Álvarez-Pallete, president of Telefónica, and Rosauro Varo, non-executive vice president of Grupo PRISA. When the resolution of the pandemic seems closer and closer thanks to the progress of the vaccination process, representatives of politics and the company will debate about the future of economic activity and political development at a global level for next year, in a sponsored forum by Abertis, Iberdrola, Iberia, Telefónica and Tendam.

The economic impact of the covid has severely punished world economies, and very particularly Spain. In 2020 there was a historic drop in the Gross Domestic Product (GDP), which reached 10.8%, the highest reduction since the Civil War. Only in 1936 was there a further decline in the economy, when it plummeted by 26%. Gonzalo García Andrés, Secretary of State for Economy and Business Support of the Government of Spain will be in charge of assessing the current situation of the country’s finances, and of reporting its recovery periods.

Within the economic transformation that is intended to be carried out in the coming years, the green economy will be one of its fundamental points. The European Union (EU), like other powers such as the United States, advocate placing the fight against global warming among the central axes of their policies. The EU advocates achieving climate neutrality between now and 2050, and to achieve this it is proposing to undertake the decarbonisation of the current energy model.

The Government is also in this line, as shown by the National Integrated Energy and Climate Plan 2021-2030, which aims to reduce greenhouse gas emissions by 23% compared to 1990. The project, which will include an investment of 240,000 million euros, they focus on a change in the energy generation model towards clean instruments, the transformation of buildings into energy saving models, the creation of a large fleet of electric cars and the urban transition towards cities with low emissions. Ignacio Sánchez Galán, Chairman of Iberdrola, will address the main lines of this ecological transition that is being drawn on a near horizon.

On the most political level of the forum, international personalities like Dubravka Šuica, Vice President of the European Commission, will intervene within a block dedicated to evaluating representative democracy. Hadi Partovi, founder and CEO of Code.org and Sheryl Sandberg, COO of Facebook and ambassador of Code.org, will be present in a colloquium about the impulse that education can provoke in the objective of obtaining an equal and sustainable development. Maria Angeles Leon, President and Co-Founder of Global Social Impact and President of Open Value Foundation, and Clara Harp, President of the United Nations Global Compact Spain, will also talk about the Sustainable Development Goals (SDG) – an initiative promoted by the United Nations to give continuity to the development agenda after the Millennium Development Goals.

The perspective on the vision of Latin America from Europe will be provided by Dita Charanzová, Vice-President of the European Parliament ―who will speak by videoconference―, while the roundtable that will analyze the effectiveness of European funds to fight the effects of the covid will be made up of Luis Garicano, head of the Citizens’ delegation in the European Parliament and economic vice-president of the Renew Europe group; Lorenzo Love, President of the National Federation of Associations of Self-Employed Workers (ATA) and vice-president of the CEOE; Elvira Rodriguez, Deputy Secretary General for Sectorial Action of the Popular Party; Y Mercedes Caballero Fernandez, Secretary General of European Funds of the Ministry of Finance.

Spain will receive 140,000 million euros in transfers and credits from the European Union in the period 2021-2026. Of these, 19,000 million will arrive in 2021. Of this figure, 9,000 million euros correspond to the advances to which countries are entitled after receiving the green light from Brussels; and the other 10,000 million will arrive in December with the first ordinary disbursement. The Government, however, has budgeted 27,000 million for this year, anticipating the money that it will obtain from the Commission to comply with the roadmap that has been set.

The different strategies that will be used by both the public and private sectors to address the exit from the economic crisis caused by the outbreak of the coronavirus will be analyzed by three leading figures from the business world: Antonio Llardén, President of Enagás; Jaume Miquel, Chairman and CEO of Tendam and Javier Sánchez-Prieto, President of Iberia.

The forum will conclude with the participation of the Minister of Industry, Commerce and Tourism, Reyes Maroto, which will evaluate the strategic sectors to channel the economic recovery, as well as the exit from the crisis in the tourism sector, one of the hardest hit by sanitary restrictions. The entry of Next Generation funds from the European Union will allow not only to contain the drain within the sector, but also to propose a reconversion that maintains its strength within the Spanish economy, and, at the same time, reduces its vulnerability to the ups and downs of the demand.