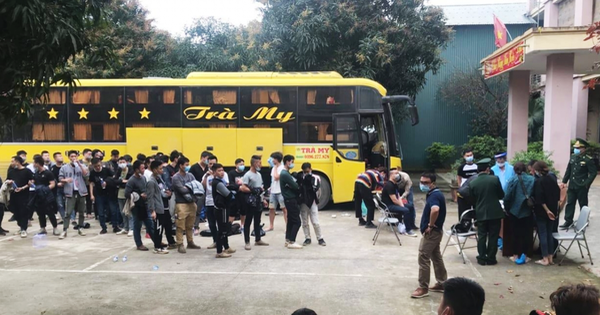 The group of Chinese who entered illegally was taken to a concentrated isolation area – Photo: Đ.THANH

On April 8, information from the police of Nghe An province said the unit had just decided to sanction, and handed over 53 people who entered illegally to the Chinese authorities.

After completing the concentrated isolation period, the test results were both negative for the SARS-CoV-2 virus, 53 Chinese citizens were fined a total of 210 million VND by the police of Nghe An province.

In which, one case, due to being under 18 years old, is subject to a fine of 2 million VND, the remaining 52 people will be fined 4 million VND / person for acts of crossing the national border without going through immigration procedures.

Previously, on March 9, Nghe An border guards coordinated with related units to stop the bed-bound passenger car of Tra My garage when it ran on Highway 1 in the north-south direction, the section crossing the road. part of Hoang Mai town.

At this time, in addition to 53 Chinese people who illegally entered the car, there are 4 Vietnamese. After that, this group was put in isolation and concentrated in Hung Nguyen district, Nghe An

On the evening of March 17, taking advantage of the loophole, four Chinese people fled the isolation ward. The two were later arrested by the Hung Nguyen district police. The other two people caught up to the runaway bus. However, just a few hours later, both were arrested by the Ha Tinh authorities in Ky Anh district while in a passenger car.

Regarding the driver and owner of the Tra My vehicle, the Nghe An border guard transferred the file and requested the police of Nghe An province to prosecute the crime of organizing, brokering other people to exit, enter or stay in Vietnam. Male illegally.