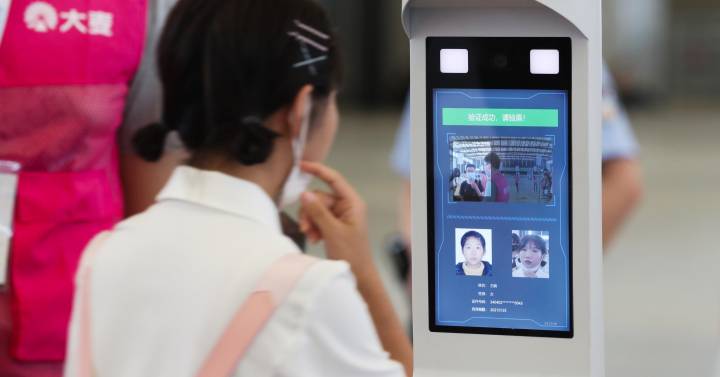 
The human rights organization Amnesty International (AI) has published an investigation in which it assures that three European technology companies – Morpho, Axis Communications and Noldus Information Technology – sell various types of biometric, facial recognition and surveillance technology, to agencies of Chinese State security and entities that, according to the organization, “contribute to enforce laws that violate human rights.” The accused companies deny it and the experts debate on the ethics in the operation of these systems and the responsibility of the European Union (EU) to tighten the “lax” norms of export of surveillance technology.

Biometric surveillance and facial recognition technologies are present in more devices and places than we realize. “Just as there are online photo albums and social networks with millions of stored photographs, there are also video surveillance systems and smartphones that use facial recognition systems from databases (or biometric templates) obtained from social networks”, explains the lawyer specialized in technology at Ramón y Cajal Abogados, Andrés Ruiz Pérez by telephone. Biometric data speed up and simplify authentication and identification procedures, for example to access the application of the bank account or an account on social networks. These technologies are used by companies and organizations, but especially by governments. And the one in China is one of those that uses them the most.

According to AI, these companies based in European Union countries export tools that have sometimes been used directly in mass surveillance campaigns against the population, such as the controversial SkyNet program or the case of surveillance, persecution and forced internment of Uighurs and other Islamic minorities of the Asian giant. “Chinese public security agencies are using products sold by European companies to increase their abusive surveillance capabilities. These companies profit from the sale of digital surveillance technologies that are related to terrible human rights violations ”, AI details.

French Morpho –specialized in security and identification systems and is part of the multinational IDEMIA– received a public contract from the Shanghai Public Security Department in 2015 to provide facial recognition equipment. Morpho sources have explained to EL PAÍS that the equipment sold was “a facial recognition system for the use of a local police force” and that “under no circumstances was this equipment in a position to be used for real-time surveillance.”

For its part, the Swedish Axis Communications – which sells and develops security cameras specialized in remote monitoring – would have collaborated with the regime since 2012 to install a network of security cameras (between 8,000 and 30,000 devices) for the city of Guilin, in the south of the country, as part of an update of the city’s Skynet surveillance program. The Swedish company has explained through a statement that they are aware that their technologies can be used for purposes other than those envisaged even though they “clearly indicate to their clients how to use them.

The third company named –the Dutch Noldus Information Technology– and China have also been in business for several years, at least since 2012. Noldus has sold its digital surveillance technology to at least two universities in the Xinjiang region between 2012 and 2018. Xinjiang is an autonomous territory in northwest China that It is home to many ethnic minority groups and frequently persecuted by the Government, such as the Turkish Uyghur people. Company sources have told EL PAÍS that these establishments bought the tools exclusively “for research in developmental psychology and education.”

How does China benefit from the products obtained? The regime has shown on multiple occasions that part of its success lies in the surveillance systems for its population. For example, Noldus’ flagship product is the FaceReader software that is used for automatic analysis of facial expressions of anger, happiness, sadness, surprise and disgust. According to research, FaceReader has been used by Chinese universities linked to the public security apparatus and the police, but above all by the Ministry of Public Security. The use of this type of technology is linked to one of the most famous cases of persecution, surveillance and compulsory confinement against minority groups in the country: China’s Secret Cables. This research was published last year and revealed how an organized system of repression designed and implemented by the Xi Jinping regime works on the Uighur Muslim minority.

Another case of Chinese surveillance and repression is that of Skynet. In 2015, the Chinese Government implemented the program – dubbed by the Spanish media as “The Chinese Big Brother” – which consisted of more than 100 million cameras equipped with machine learning and a facial recognition system and installed to record the interactions of their citizens. Technology allows the government to know what and who they see, wherever they are. The regime had predicted that by this year, Skynet would be operating at maximum. The Swedish company Axis Communications would have contributed directly with the installation of cameras for this program in the city of Guilin, in the south of the country, according to AI.

The relationship between the facial recognition system and the Chinese state’s desire for control, persecution and indoctrination go hand in hand, and as AI’s investigation points out, the supply of surveillance material by European companies to the regime could have “contributed with the limitation of the freedoms of the citizens of the Asian giant ”. At the same time, Europe is very strict when it comes to the use of facial recognition and biometric systems.

“It is inconsistent for Europe to protect the biometric data in such a rigorous way and at the same time that it allows the trading of systems that may violate the protection of said data to third countries where fundamental rights are not respected ”, says Natalia Martos, CEO and founder of Legal Army. In the European Union, such treatment is regulated by the General Data Protection Regulation (RGPD), which classifies biometric data as special categories. “Therefore, in Europe the use of these systems represent a treatment that, in principle, is prohibited by the RGPD. They can only be used in certain exceptional situations assessed in the regulations and complying with a series of legal requirements that are very demanding ”, explains Martos.

“Giving video surveillance systems and smartphones with facial recognition systems indiscriminately and without any control could put an end to anonymity and unregistered movement of people. In addition, these technologies could be used in an evil way, generating serious identity theft problems, as a smile at a camera could replace cards, codes or passwords, ”warns the lawyer Ruiz Pérez, who is in favor of compliance with the principles included in the regulations, among others the so-called “Privacy By Design”. “This principle establishes that data processing must be designed preventively from the beginning with a proactive approach and safeguarding the privacy of the user from the first steps of definition and development of products or services,” he explains and adds that this principle “strongly affects ”To technologies that are not yet generalized and in which different actors and activities are involved.

AI has put the investigation on the EU table and is now demanding strong action from it. “The European biometric surveillance sector is out of control, as it is an industry that moves billions of euros and that flourishes by selling its goods to those responsible for human rights abuses,” denounced Merel Koning, head of Policy, Technology and Human Rights at Amnesty International, in a statement from the organization. According to Koning, the current EU export regulatory system is “flawed and needs to be fixed right away.”