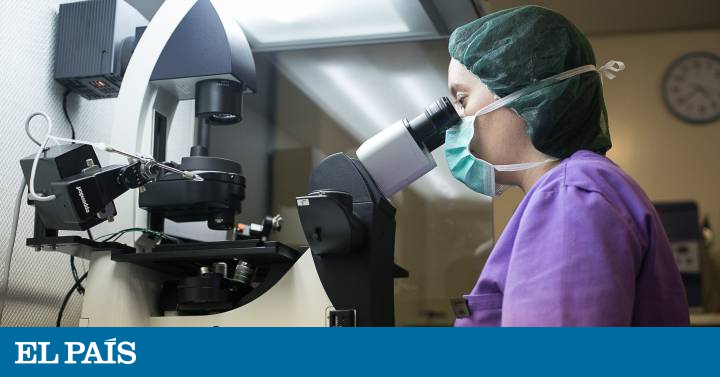 
More than half of university students in Spain, 55%, are female, and yet the gender gap is abysmal in some higher education. The presence of women continues to be a minority in the so-called STEM disciplines (Science, Technology, Engineering and Mathematics, for its acronym in English): if in the 2018-2019 academic year, for example, 51% of Science enrollments correspond to women, three out of every four students enrolled in the Engineering and Architecture branch are men, and in Computer Science, women remain at 12.9%. These, on the contrary, represent an overwhelming majority in the branches of Health Sciences (70.3%), Arts and Humanities (63.6%) and Legal and Social Sciences (59.8%), according to data from the Ministry of Universities. The data outside of Spain does not change much, and worldwide only 29% of researchers in the field of Sciences are women.

Is this due to an innate gender predisposition or is it rather the product of a long history of prejudices and social stereotypes? Rather, the latter, experts say: “Unfortunately, we live in a system deeply dominated by gender roles (…). Traditionally, women have been socialized in the care (of home, family, our elders and our children), and it has been said of us that we are “more intuitive” or “sensitive”, so there is a majority of women in careers such as communication, philology, occupational therapy or nursing, ”says Ludi García, managing director of the communication consultancy Hotwire. “Meanwhile, men have been attributed strengths such as a cold and analytical mind, pushing them towards more scientific-technical careers such as science, engineering or mathematics. Of course, these are nothing more than social constructions that, unfortunately, continue to prevail in some sectors of society ”.

Fight against the gender gap, essential

For Ana Delgado, Chief Education Officer At The Valley, female talent exists and is very abundant, and she believes that the basis for success lies in striking a balance that highlights the added value that each one can bring to this STEM field. “Teams with varied and multidisciplinary profiles encourage productivity, efficiency and creativity. In the same way that there are different profiles in terms of abilities (such as, for example, people more given to analytics, strategy or business), the same thing happens with gender. And all are necessary ”. With technological advances and the rapid evolution of digitization, there is an increasing need for experts capable of helping and guiding companies and professionals to address this new panorama and meet those needs, and in this demand it is irrelevant whether you are a man or a woman .

“A mantra that we constantly repeat, but which is no less true, is that because of the gender gap in these disciplines we are losing half our talent. Today we see that one of the main problems, announced by the European Union, is the lack of skills in the jobs of the future, those closely linked to technology “, says Belén Perales, head of CSR at IBM Spain. The data suggest that STEM disciplines are not among the favorites of young people, but even so, 16.3% of 15-year-old Spanish adolescents contemplate dedicating themselves to these areas when they are adults: of them, 12.1 % corresponds to boys and only 4.2% to girls, which shows that the gender gap already occurs at a very early age. “At IBM, we believe that the solution lies in promoting education in these disciplines from a very young age, to end these stereotypes that lead us to think later that certain careers are male or female,” he adds.

The economic and sociological projections effectively point out that the well-being of our economic system goes through a development of technological profiles that cannot be stopped in the face of gender obstacles and that will involve all productive sectors. “The future will not be as demarcated as science and letters, but we are going towards a more transversal training”, argues Rafael Conde, director of the degree in Digital Arts at the Camilo José Cela University (UCJC), in Madrid. “The STEM subjects will be present in all the trainings. Before, being illiterate was not knowing how to read or write; exaggerating a bit, but not so much, in the future it will be not knowing code, whatever you do. That is why we need STEM women, so that they break the stigmas and not only girls, but the entire population, approach this knowledge without prejudice or complexes ”.

Of course, that does not imply that scientific vocations have to be forced if there is no interest. The problem is that, as Conde recalls, this exists, “but many women who would like to enter do not do so because of the social stigma that it entails of a“ masculinized world ”and, above all, something asocial”. The case of the degree in Digital Arts at UCJC is somewhat different, since (although they are a small group) this course 100% of the enrollment has corresponded to women, and in the second course there is also a majority female. There, students learn from more artistic disciplines such as photography and drawing to more technical elements such as multimedia programming, principles of robotics and design, understood as 2D illustration, 3D modeling and printing, web design, layout … Some studies whose career opportunities are in the creative industries, which currently generate more employment than the automobile industry in the United States, Europe and Japan combined, according to the ILO: animation, digital design, video games, special effects, post-production or web design.

To promote scientific curiosity and STEM disciplines among girls, a joint effort is required that promotes inclusive values ​​from childhood and helps to make visible the female references that already exist (and have existed) within the STEM field. A task in which parents and families, on the one hand, and educators, on the other, play a fundamental role: “It is necessary that not only at school, but also at home, they are educated in equality and collaboration . It is everyone’s responsibility that we work to tear down conventional ideas and the roles traditionally assigned to each of the genres ”, reflects Ludi García.

On the other hand, it is necessary that, from the educational centers, an orientation free of stereotypes is offered in which reinforcing the presence of women in educational content helps girls want to dedicate themselves to science. “The key is to offer experiences with disciplines of engineering, science, mathematics and others from a young age, so that everyone becomes familiar with these areas and sees all the possibilities they offer, regardless of gender,” says Delgado. In any case, it is about educating children, inspiring and encouraging them to advance in the path that interests them most. “In general, the inclusion of female references helps to reduce gender inequality in all areas,” insists Perales.

However, when it comes to giving visibility to these references, the responsibility goes much further, and involves companies, public and private institutions and the media. Thus, public spaces such as ChicaStem, which includes national and international initiatives to promote vocations in these disciplines, or the Women, Science and Innovation Observatory, created in 2019 to “combat any discrimination based on sex, guarantee equal opportunities and increase the presence of women in all areas of scientific and university life ”.

The Complutense University of Madrid (UCM) presented the project in June 2019 Why so few which includes a feature film and 20 audiovisual pills with which it is intended to make visible the role of Spanish women in the fields of technology and science, with references such as Margarita Salas (biochemist), María Blasco (biologist), Elena García (robotics engineer ) or Clara Grima (mathematics). IBM, for its part, has had initiatives such as Watson going to class and Open P-Tech, that offer the youngest the necessary tools to awaken this curiosity and foster a vocation in these disciplines.

The field of communication is, finally, very important when it comes to giving visibility to women and that future generations see references to follow: “On many occasions, students are interested in a discipline because of the information they see in the media. If the journalist is a woman, the chances of them feeling reflected and capturing her interest are greater ”, concludes Ludi García.

Female leadership in the STEM field

If there is a gender gap in the number of women entering STEM degrees, there is also a gender gap in terms of the number of women entering senior management positions in technology companies, a market gap that it aims to help fill. the Master’s Degree in Executive Development for STEM Women, from the UCM, a training “aimed at women who have been references and who have been working in technological areas for 15 or 20 years, training them in skills and competencies that allow them to exercise that leadership in business contexts that they are eminently masculine ”, explains Silvia Carrascal, director of the program.

The objective, she affirms, is to empower women, although at the same time she emphasizes that it is more about valuing talent and recognizing the competencies that one possesses, whether you are a man or a woman, than to comply with a certain percentage [por los planes de igualdad de las empresas]. The UCM master’s degree thus focuses on “contributing to their personal development and empowerment through mentoring and coaching career, with experts in communication and social skills, leadership, decision-making, strategic vision and updates on the digital transformation of companies ”.

For Carrascal, it is about providing new styles of leadership, since women can promote “one that is much more flexible and transversal, less pigeonholed in what is knowledge and much more related to the challenges, achievements and challenges of a company , a team or a project ”. “Someone”, he continues, “who is capable of seeing not only the economic impact, but also the more personal and emotional side of things: the effect it has on society; how sustainable it is for the company; what is the positive impact for its employees or what policies to implement for a better organizational culture ”.

With this degree, you will learn to implement global IT solutions, and you will be able to direct and carry out the tasks of all phases of the systems life cycle.

Master in Design and Art Direction

You will work on communication, advertising, photography, visual language, graphic design, audiovisual light and visual codes, among many other concepts.