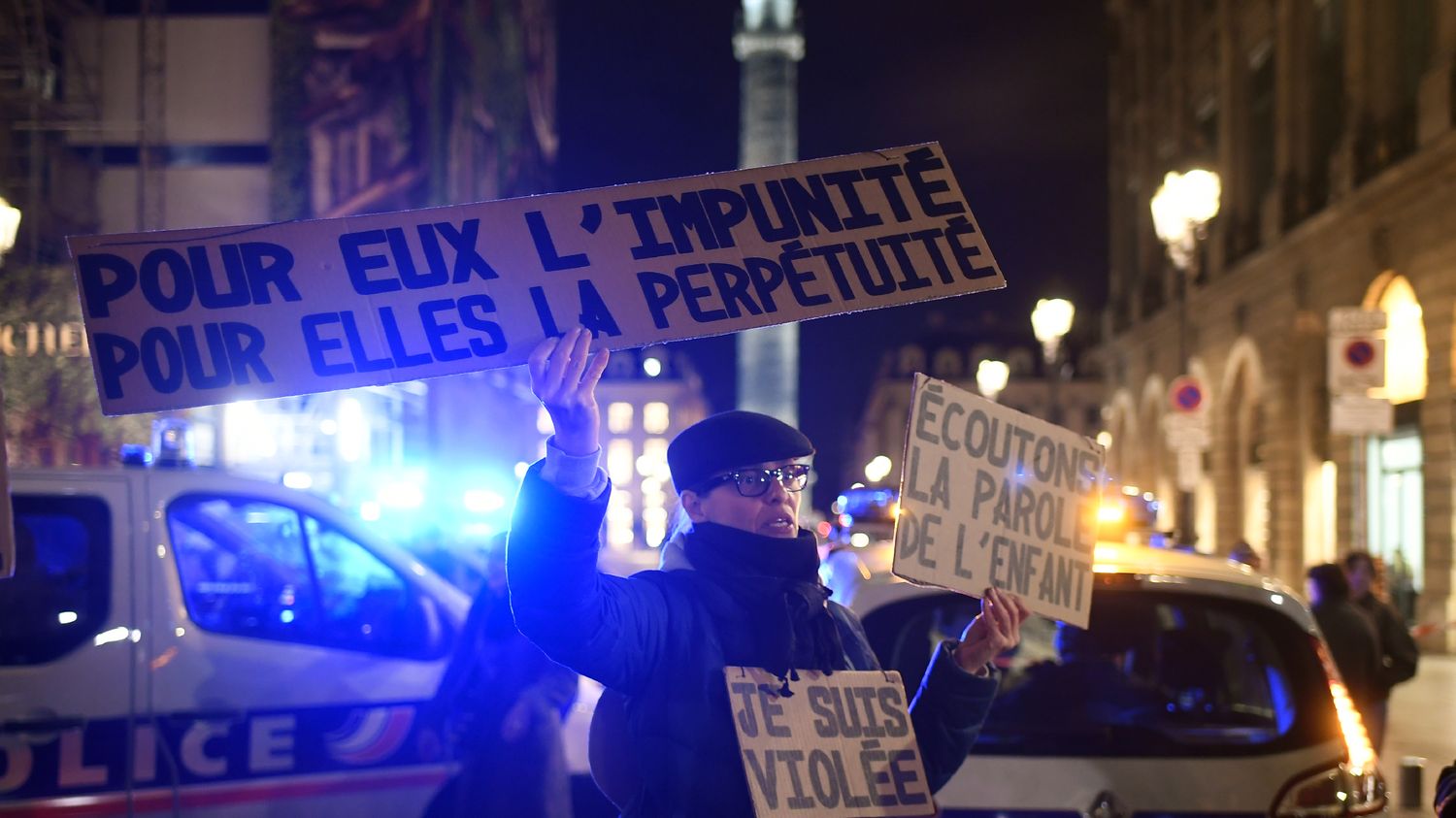 “At 11, you don’t consent.” Before the Ministry of Justice in Paris, Tuesday, November 14, several feminist organizations denounce recent court decisions in cases involving minors. In early November, in particular, the Assize Court of Melun (Seine-et-Marne) acquitted a man accused of raping an 11-year-old girl, facts dating back to eight years ago. The case caused a stir in public opinion and revived the debate on the sexual consent of minors: should a threshold be set, an age below which a victim can never be considered consenting?

Place Vendôme rally to change the law! A child is never consenting pic.twitter.com/w6Su0yWACW

In this case, everything begins in August 2009. The child is on vacation with his uncle. She plays ball and rides a bike with other children, in the courtyard of a building in Champs-sur-Marne (Seine-et-Marne). His cousin and a friend come to inform him that a “tall” wants to talk to him. This 22-year-old young man is also on vacation in the subdivision, with a relative, but has never spoken to him before. “They discuss everything and nothing”, says Laure Habeneck, lawyer for this young girl who is now 20 years old. The man asks him where he can find a park in the vicinity.

The complainant claims to have informed her interlocutor of her age, 11 years old. The man says she told him 15 or 16 years old. The girl “does” her age, however, affirm later educators, according to Laure Habeneck. The two protagonists discuss everything and nothing, while heading to the nearby park. “He follows her, because she knows Champs-sur-Marne better than he”, says Samir Mbarki, lawyer of the man. “Until the entrance, everything is fine. My client never claimed he had forcibly dragged her, continues Laure Habeneck. But all of a sudden, he grabs her and everything turns upside down. “

This is where the versions diverge. The complainant said she was held down, stripped naked and penetrated. “She doesn’t say no to him at any time, it just happens naturally”, answers Samir Mbarki. “It’s word against word”, he adds, pointing to the absence of a medical certificate, ITT (total incapacity for work) or witnesses. But Laure Habeneck is convinced of the forced nature of the sexual act. She does not see her client, of shy and reserved nature, falling into such a scenario with a stranger. “The expert psychologist explains that he is someone who does not express his feelings, ever.” A child resulting from this sexual intercourse was born the following year, in 2010, before being placed. The family learned of the facts during the girl’s pregnancy, according to The Parisian.

When talking about her story, during the hearing in Melun, Monday 6 and Tuesday 7 November, the complainant is in tears. Laure Habeneck evokes a young woman “very courageous and worthy”: “The defense described the scene as an initiative of a sexual encounter – the first of his life, in a park with a stranger! “. The attorney general requires eight years in prison and socio-judicial follow-up, but the man is finally acquitted of the rape charges. Quoted by AFP, the Meaux prosecutor explains that the jurors considered that the constituent elements of rape, “compulsion, threat, violence and surprise, were not established”.

“How come people with potential parents can make decisions like this?”, asks the mother of the complainant, quoted by the lawyer. Why did the court not retain the “moral constraint”? Since 2010, article 222-22-1 of the Penal Code provides that this constraint “may result from the age difference” between a minor victim and his attacker. Was 11 years old at the time of the facts, was the girl only able to consent to a sexual act? “My answer is no”, slice his lawyer.

There is no possible doubt. She was a child at the time. She was not interested in boys.

Laure Habeneck, lawyer for the complainant

But the 2010 text on moral constraint gives a “simple possibility of definition”, nuance Audrey Darsonville, professor of criminal law: “It’s an indication”. The age difference alone is not sufficient today to qualify the constraint. On the other hand, the lawyer considers that the jury in this case could and should have retained the criterion of surprise. “An 11-year-old girl doesn’t have to scream for rape to apply, she explains. The state of bewilderment – which is a state of tetany – can be considered to prevent consent. “

To avoid cases like this, many associations propose to set in law an age below which sexual assault (or rape, in case of penetration) would be established. de facto : any sexual act between an adult and a minor below this threshold would be qualified as rape. “This question arises because the law is poorly applied, valued Audrey Darsonville. It is perhaps today the only way we have to protect minors. “” The advantage is that the Advocate General would no longer have to provide proof of a lack of consent “, continues Laure Habeneck. The idea is now the subject of several petitions and four bills, according to a count of World. The Minister of Justice, Nicole Belloubet, is committed “on a law around the spring”, at the microphone of CNews.

It remains to define this famous threshold. The High Council for Equality proposes 13 years. Audrey Darsonville recalls that a minor can be imprisoned from this age, under juvenile criminal law. “If we consider that a 13-year-old is mature enough to be imprisoned, we can also consider that he or she has sufficient maturity to give consent to sexual relations.” It is also the statistical age of puberty, says psychiatrist Roland Coutanceau, co-author of Victims and perpetrators of sexual violence (ed. Dunod): “The sexual imagination is revolutionized by puberty. A prepubescent girl or boy does not seek in sensuality the same thing as a puberty.”

But “the puberty revolution” is not sufficient for “give consent for adult sexuality”. The doctor recalls that not all adolescents develop the same maturity at the same age. “Beyond the symbol of age, which makes it possible to convey a message in the social field, nothing replaces the study on a case-by-case basis. We still have to study in concreto each story, to understand what happened between the two protagonists. ” Other French proposals mention a threshold at 15 years. Spain, Germany and the UK have adopted barriers at 12, 14 and 16, respectively.

We want to make believe that the Assize Court legalized pedophilia in France, but nobody wants to understand! It is horrible what the complainant suffered, but it is called sexual assault on a minor under 15 and not rape.

Samir Mbarki, lawyer for the accused

Recently, the court of Pontoise (Val-d’Oise) thus acquitted a man, accused of rape, in a similar case, while prosecuting him for sexual assault. This qualification, however, was not mentioned in the Champs-sur-Marne case. Asked by franceinfo on this subject, the prosecution has not yet followed up. Such an offense might have been able to convict the accused, but for Audrey Darsonville, however, this term remains a stopgap in this kind of business. “It is very unfair for the victims because the sexual assault postulates that they were consenting”, she analyzes.

Unlike rape, sexual assault is not a crime, judged at the assizes, but an offense, punishable by five years in prison and a fine of 75,000 euros, studied in the criminal court. When it is not used wisely, it would therefore be an underqualification. “Judges are sometimes reluctant to send minors to the Assize Court [pour un crime, le viol], for fear that their words will not be sufficiently heard by the jurors “, explains Audrey Darsonville.

In this case, the complainant “had to show a lot of courage to come to the bar”, considers his lawyer. After having done “the mourning of his childhood” in 2009, she experienced the acquittal “like a second trauma”, in the words of Laure Habeneck. Today a student, the young woman aged 20 does not wish to speak. A new trial is due as the attorney general has appealed the controversial verdict.