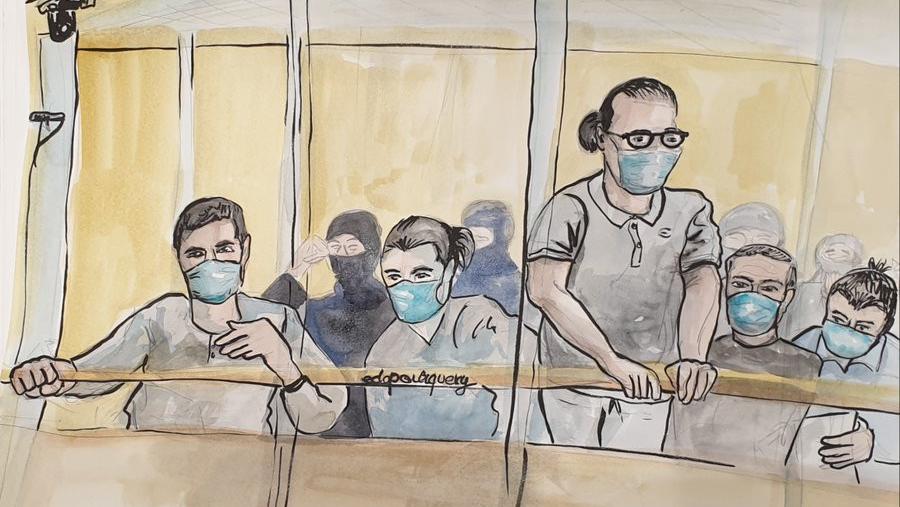 Accused of having helped Amedy Coulibaly to buy weapons, Saïd Makhlouf tried on Friday to justify his contradictions and his oversights, without putting an end to the doubts surrounding his line of defense.

“The further I went, the more I was like, ‘I’m going to serve as a stepladder for the last shelf.'” With a sense of the formula all his own, which does not go unnoticed, Saïd Makhlouf sums up, Friday, October 9, the role of intermediary that is attributed to him in the preparation of the attacks of January 2015. “I’m innocent, it’s been five and a half years!” he proclaims before the special assize court in Paris. Like the other defendants, whose interrogations began on Monday, he is on trial for criminal conspiracy in connection with a terrorist enterprise. If he finds himself in the box of the accused, it is because his DNA was found on the thong of the Taser in the possession of Amedy Coulibaly, at the Hyper Cacher, on the 9th. January 2015. Yet this man of 30 years assures not to know the terrorist and not to have seen him “only half a time” – two actually.

This Taser, I have never seen it, I have never touched it and I do not understand: it gnaws at my brain.Saïd Makhlouf, accusedat the hearing

The accused, a corpulent figure, square dark glasses, curly hair tied in a ponytail, does not explain the presence of his DNA. Since he has no explanation, Saïd Makhlouf is silent. From September 2017, he wallows in silence in front of the examining magistrate. It takes the intervention of his lawyer, Laurent Simeray, for him to write a letter to the magistrate. This time, facing the courtyard, his flow is rapid: he is in a hurry to explain himself.

But it’s his co-accused and “distant cousin”, Amar Ramdani, who provides an explanation. The 6 January 2015, the latter goes to Saïd Makhlouf, in Gentilly (Val-de-Marne), with Amedy Coulibaly, to collect 200 euros that he owes him. Saïd Makhlouf is not there: ambulance driver, he works at night, from 19 hours to 7 hours. Amar Ramdani tries to warn him, but Saïd Makhlouf does not answer the phone. He has the keys, he comes in, looks for the money. Meanwhile, Amedy Coulibaly collapsed on Saïd Makhlouf’s sofa, which he unfolded to sleep. His cousin “sweats” and “drool”, specifies Amar Ramdani, questioned Wednesday and Thursday by the court. This explains, according to him, the transfer of DNA from Saïd Makhlouf on the thong of the Taser. A hypothesis considered probable, but not privileged. And which leads the assessor, driven by curiosity, to ask funny questions to Saïd Makhlouf.

“This is where you sleep ?

– Yes, it’s a corner sofa, so it unfolds. Sometimes I leave it open.

– After that, I’m not asking you if you drool when you sleep sir …

– Yes it is. And first of all, I only sleep in my underwear.

– There is a corner sofa and we also noted the presence of a mattress.

– It is used when I have a friend who is sleeping. Me, I prefer the sofa than a mattress. “

Saïd Makhlouf waves his hands while speaking, triturates the microphone in front of him. His style makes him sympathetic, his expressions amuse the audience. He says it himself : he likes people “simple”, who “laughing”. “I love it, I enjoy life to the fullest”, he blurted out.

But Saïd Makhlouf is also suspected of having helped Amedy Coulibaly obtain assault rifles and automatic pistols by going six times to the Lille region with Amar Ramdani, between October and December 2014. The accused defends himself from to have played the intermediaries, but remains evasive when it comes to explaining. He first assures to be “mounted in Lille” to see prostitutes, accompanied by his cousin. Then he evokes scams – which he used to commit with Amar Ramdani – relating to vehicle purchases by consumer loans. “There are dealers all over the place, why the North?” inquires the general counsel. Saïd Makhlouf finally pretends a purchase of marijuana from Mohamed-Amine Fares, to his right in the box.

Why, while you face twenty years in prison for criminal conspiracy, are you hiding this drug story? This is what I have difficulty understanding.Julie Holveck, General Counselat the hearing

The accused puts forward his failing memories: “My memory is failing.” The first assessor frowns. “That’s what you said, ‘I have a crappy memory.” Saïd Makhlouf is also part of the “panic” related to his situation. So, like Amar Ramdani, he broke the chip on one of his phones a few hours after the Hyper Cacher attack. “When he told me that Amedy Coulibaly was the cause of what happened, I was going to pass out. We didn’t speak for at least five minutes. Sorry for the expression. but I was on my ass “, he says. The accused says he was “selfish”. “I thought about myself, my scams. Automatically, we threw away our chips. It makes sense, it’s not even a question to ask.” According to his reasoning, “the French police, super strong”, will go back to Amar Ramdani, then to him. “And they’ll call me for a scam for free”, he adds.

“Scams have nothing to do with Coulibaly”, he takes care to explain. “Money, I burn it, especially for the holidays. I’m not the type of guy to go on vacation with a Quechua tent and a stove”. To hear him, he’s more of the type to go to Thailand, Martinique or Canada. “I tried to travel a lot. I’m not a globetrotter, but traveling is my passion. I love nature”, he does not hesitate to say, without seeing any contradictions, nor understanding that he is drowning in his own explanations. Saïd Makhlouf had yet said loud and clear a little earlier: “Basically, I’m not a liar.”