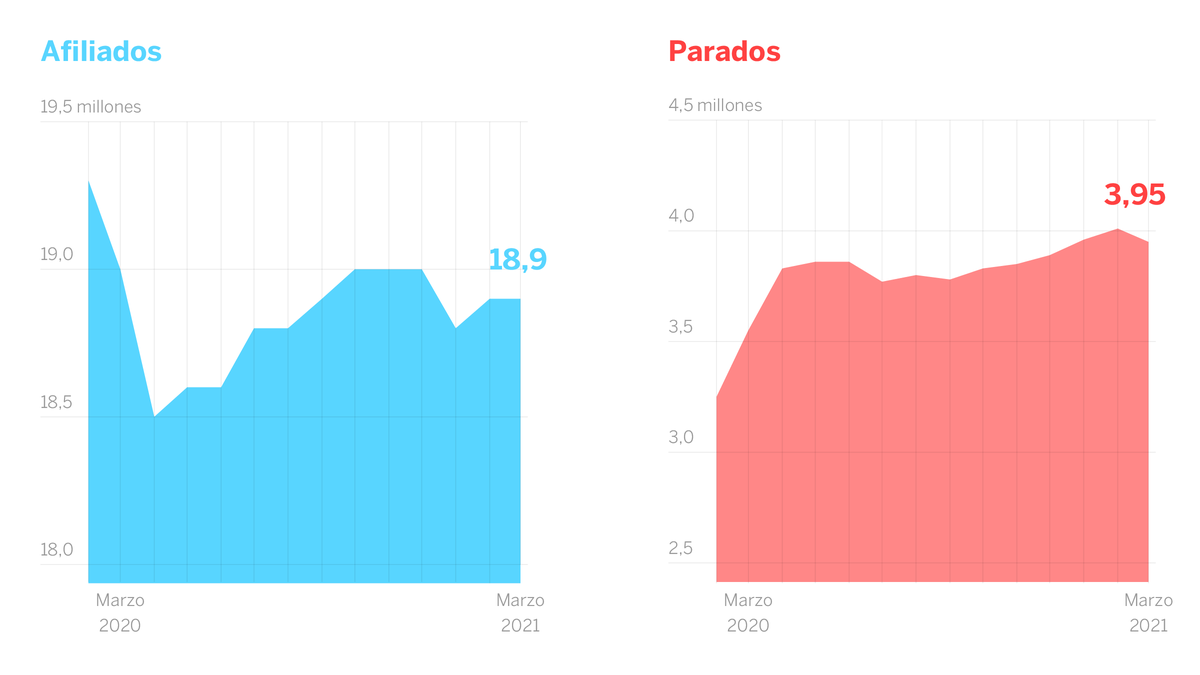 
It has been a year since the pandemic exploded in Spain. The labor market received a severe blow with the measures imposed to stop the advance of the coronavirus. Despite the ERTEs and other aids deployed to cushion the blow, the wounds remain open as can be seen in these eight graphs.

1. The affiliate drop in the first alarm state has not recovered

Employment was shaken by the pandemic as of March 12, 2020, when the state of alarm was approved. From that day until the end of that month, membership fell by 898,822 people, a collapse not seen until then that interrupted the six-year path of improvements. The drop in average affiliation in that month was less, but this form of measurement did not include the intensity of what was experienced in the labor market, because the activity had behaved normally in the first week. Membership also fell back in April, when it hit ground. From then on, a recovery process began that lost steam over the months and took steps back in January. With the known data for March 2021, since the beginning of the coronavirus, Spain has yet to recover 85,858 media affiliates to reach the prepandemic level.

2. The increase in unemployed has spread throughout the year

Like what happened with affiliation, registered unemployment rose a lot since the state of alarm was declared to stop the transmission of covid-19. In a single month, the number of unemployed registered in the employment offices grew by 302,365 people. The upward path continued in April and May. Subsequently, the upward trend has continued, although it has not been constant. Despite this, February reached more than four million unemployed. Last month it fell by almost 59,149 people and stayed at 3,949,640. In total, there are 401,328 more unemployed than a year ago.

3. Hospitality and commerce, the sectors most affected

The hospitality industry has undoubtedly been the economic sector hardest hit by the pandemic. The preventive health measures adopted to contain the transmission of the coronavirus have focused on reducing the capacity of places such as bars and restaurants. The limitation of movements, the perimeter closures of autonomous communities and the prohibition of flights to tourism have also affected a lot.

The ERTEs have been the great tool to cushion the impact of the pandemic on the labor market. The maximum number of people protected by this internal flexibility mechanism was registered at the end of April and the beginning of May of last year, when there were more than 3.4 million people affected by ERTE. Afterwards, the figure fell and once the summer was over it has already been rising and falling according to the intensity with which the different waves of the pandemic have hit Spain and have led the authorities to adopt measures to stop it.

5. The number of affiliates remains at the levels of 2018

The summer before the outbreak of the pandemic, Social Security had broken its all-time membership record. It exceeded 19.5 million affiliates and exceeded the level reached in 2007, the previous maximum achieved before the financial crisis exploded and the Great Recession arrived, from which Spain took six years to recover its affiliation levels.

6. March is still a good month for employment

March is usually a good month for employment. Only in times of severe economic crisis, such as the recession of 2009 and 2010, did membership decline in March. In this month the usual thing is that the hiring for Holy Week begins. This was not experienced in 2020, when the economic activity stopped due to the state of alarm. Nor has 2021 been a great month due to the restrictions to contain the third wave, despite the fact that the average membership has risen by 70,790. This is due to the measures taken to prevent mobility in this holiday period and what happened at Christmas happened.

7. The number of unemployed close to four million people

Unemployment exceeded four million people in February. Five years after losing that level, he returned to it. In March it fell to 3.95 million people, after a monthly decline of 59,149 unemployed. Despite this, the number of unemployed is still clearly above the pre-pandemic level.