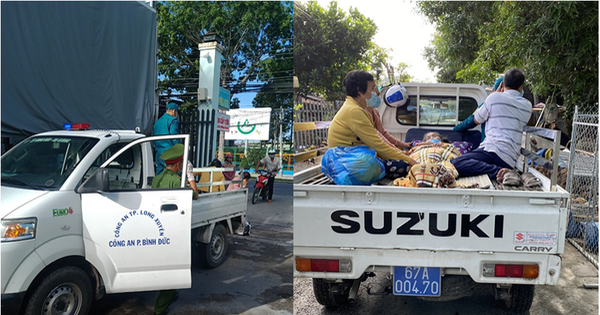 On July 21, Colonel Nguyen Nhat Truong – Deputy Director of the An Giang Provincial Police Department – presented a certificate of merit from the director of the provincial Public Security to Lieutenant Le Minh Soan, police officer of My Thanh ward and the police team. Binh Duc ward, Long Xuyen city, when promptly supporting to save people in emergency during the time of social distancing according to Directive 16 of the Prime Minister.

Before that, at about 5:30 on July 19, while on duty at the unit, Lieutenant Le Minh Soan received a phone call from Ms. Nguyen Thi Trang (29 years old, living in My Thanh ward) saying that she was 26 weeks pregnant with twins. , now home alone and with severe abdominal pain, signs of birth.

Senior Lieutenant Soan quickly drove a specialized vehicle to Ms. Trang’s house, and at the same time passed the information on to the medical staff of the ward for support. After that, Ms. Trang gave birth to 2 girls safely.

In addition, at 7:30 a.m. on July 20, receiving a phone call from a family member of Mrs. Nguyen Thi Bau (84 years old, living in Binh Duc ward) who was unconscious, while there was no vehicle to help, the patrol team immediately Epidemic prevention and control of Binh Duc ward police, Long Xuyen city quickly determined her whereabouts and took her to the hospital for emergency. Her health is stable now.

Colonel Nguyen Nhat Truong praised the meaningful actions of officers and soldiers. At the same time, we hope that officers and soldiers of the provincial police force will continue to promote the spirit of serving the people, doing a good deed for the people every day, worthy of being a revolutionary policeman in the Ho Chi Minh era.

An Giang police donate 110 tons of rice to the poor

TTO – On July 17, police of districts, towns and cities in An Giang distributed rice to the poor in localities to overcome the pandemic. This is the program ‘Rice grain of gratitude to the people’ of An Giang Provincial Police with more than 110 tons of rice for poor households.