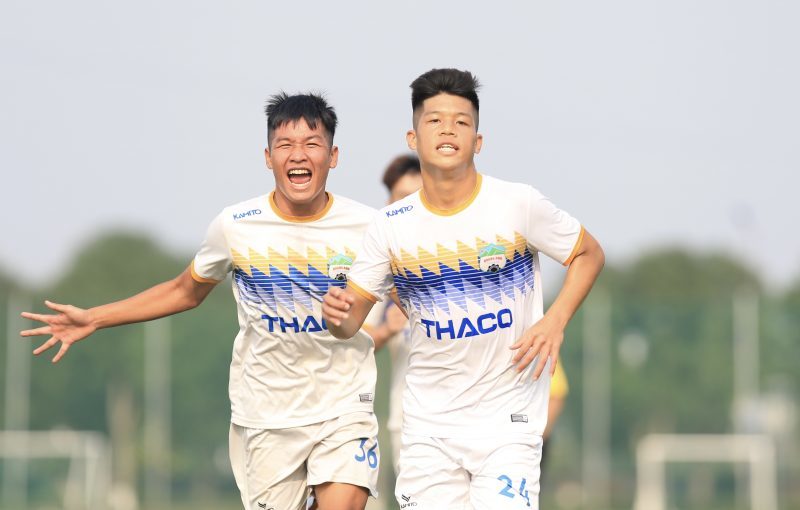 U17 HAGL was 2 goals ahead, but Cong Phuong’s juniors did not give up, going upstream by 1 point to enter the quarterfinals with the top position.

U17 HAGL got tickets to the quarterfinals soon, so Cong Phuong’s juniors joined the fight against U17 B. Binh Duong, more motivated. Therefore, U17 B. Binh Duong entered the match well and soon took the lead by 2 goals, thanks to Hoang Ha and Hoang Long in the first half.

Being flushed with cold water, touching self-confidence, U17 HAGL was like a coma. In the first half, Le Van Truong lit up hope with a goal to shorten the score. The efforts of the German youth team paid off in the 88th minute when Nguyen Van Son La scored, snatching 1 point for the U17 HAGL.

With an unbeaten streak, U17 HAGL won first place in Group C. U17 B. Binh Duong, despite dropping the last-minute victory, was still named in the quarterfinals when he became one of the two third-ranked teams with the best performance.

Meanwhile, Hanoi U17 is not too difficult to beat U17 Long An 2-0, finishing second in the table after the German team. Thus, 8 teams reached the quarterfinals, including: PVF, HV Nutifood, Hallmen HCMC (Group A); Viettel, SHB Da Nang (Group B) and HAGL, Hanoi, Becamex Binh Duong (Group C).

According to the codes PVF vs Binh Duong, Viettel vs Hallmen HCMC, HAGL vs SHB Da Nang, Hanoi vs Nutifood Academy. The four quarter-finals were all held on December 5 at the PVF Center.