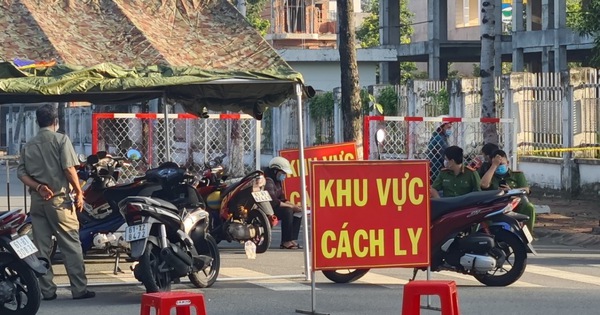 A supermarket in Binh Duong was blocked because of the COVID-19 case – Photo: BA SON

On June 22, the Department of Health of Binh Duong province said that in the face of complicated developments of the COVID-19 epidemic, the delegation of the Ministry of Health (the standing body of the National Steering Committee) will inspect the prevention anti-epidemic in Binh Duong on June 23. In Dong Nai, the team will check on June 24.

In addition, there were also representatives of the Pasteur Institute in Ho Chi Minh City and Cho Ray Hospital.

The inspection content is the organization of zoning, isolation, medical supervision, vaccination against COVID-19 epidemic, inspection of infection prevention and control in industrial parks in localities.

In Binh Duong, the delegation will check the dormitory of workers in Binh Hoa ward (Thuan An city, where there are many workers and there have been infected workers), the concentrated isolation area in Thuan An city. and factory at Song Than 2 Industrial Park (Di An City), Provincial General Hospital. After that, the inspection team will work with the Epidemic Prevention Steering Committee of Binh Duong Provincial People’s Committee.

Currently, the outbreak in Tan Phuoc Khanh ward (Tan Uyen town) is the largest in Binh Duong, accounting for 118/141 cases.

The health sector of Binh Duong province identified the largest outbreak in Binh Duong in Tan Phuoc Khanh ward (Tan Uyen town) and the company in Binh Chuan ward, Thuan An city as worrying because the virus strain from India has a high speed. spread quickly, penetrating many companies and workers’ dormitories.

For other outbreaks that have been controlled, such as at Puku Vietnam Co., Ltd (Dong An Industrial Park 1); The epidemic point is in Binh Thang ward (Di An city) and at Ehome 4 apartment building (Vinh Phu ward, Thuan An city). Other outbreaks that are no longer capable of spreading to the community are: in Binh Quoi B neighborhood (Binh Chuan ward, Thuan An city); outbreak at a real estate company in Di An city.