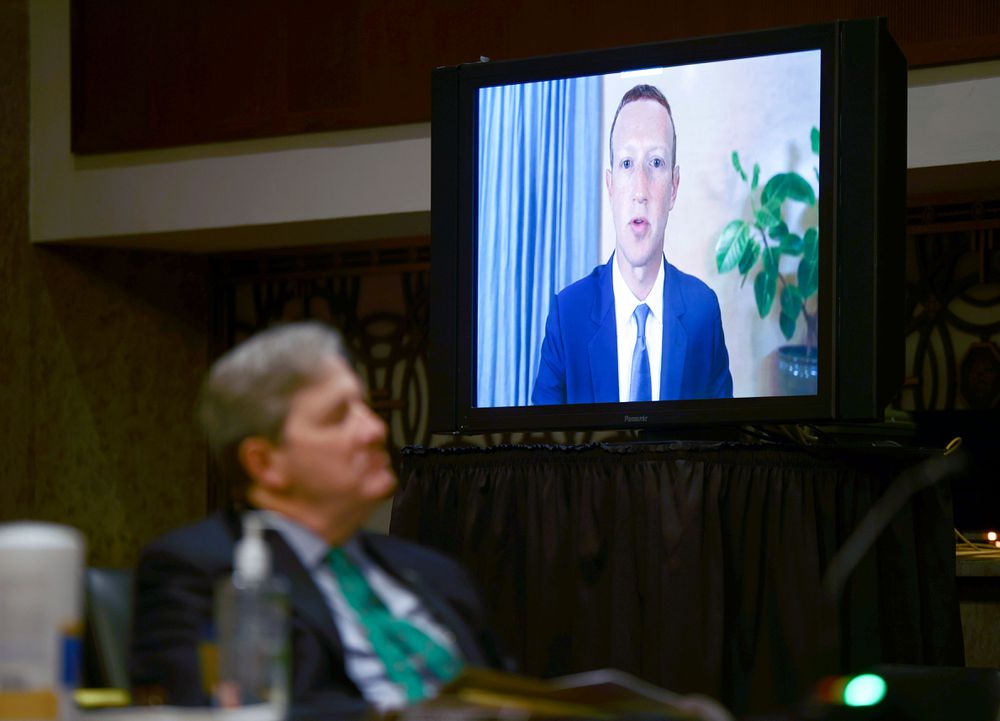 A total of 300,000 tweets tagged for contributing to disinformation in the US elections. Two out of every 1,000 messages from the conversation on Twitter about the presidential elections, published between October 27 and November 11, were singled out by Twitter for violating its policies to combat the spread of false news. This was explained this Tuesday by Jack Dorsey, the company’s chief executive, before the United States Congress.

Dorsey and Mark Zuckerberg, his Facebook counterpart, were again being questioned by senators just three weeks after their last appearance before another committee. Like the previous one, in which they were accompanied by executives from Google and Apple, they have also appeared at this hearing by videoconference due to the pandemic. Silicon Valley bosses are almost a regular presence on Capitol Hill. But expectations this Tuesday were particularly high, due to the role that both companies are playing in an electoral process that is not yet closed, not so much because there are still a few votes to be counted, but because of the unusual fact that President Trump is refuses, two weeks after the elections, to accept a resounding defeat that all the major media credit and the international community recognizes.

Twitter and Facebook, their bosses have said, are taking unprecedented steps in their effort to limit misinformation during the process. “We have made the greatest effort for the integrity of an electoral process that a private company has done in recent times,” defended Zuckerberg. But the need for greater control of his power to moderate the conversation raises a rare consensus between the two parties. “I don’t want the government to take on the role of telling the United States which tweets are legitimate and which are not. But when there are companies that have the power of governments, much more than the traditional media, something has to be done ”, said Republican Lindsay Graham, president of the Judicial Committee that welcomed the appearance.

The legislative justification for convening these hearings on Capitol Hill is to debate the reform of a key precept: Section 230 of the Communications Decency Act of 1996, which frees technology companies from responsibility for content posted on their platforms. , even if they break the laws. The standard, Dorsey has defended, “has created a lot of good things and a lot of innovation.” “If we had not had those protections when we started 14 years ago, we could not have started,” he added.

Both parties support the reform of Section 230, but until now the hearings in the Senate have not provided further details. This Tuesday yes. The senators have shown that the legislative initiative will be addressed in the next legislature, when the new Congress from the polls is established in January. “We have to find a way that when Twitter and Facebook make a decision about what is reliable and what is not, what to allow and what not, there is transparency in the system. Section 230 needs to be changed because we can’t move from here to there without reform, ”Graham said. “The change is going to come. No doubt. And I plan to promote an aggressive reform of section 230, “said Democratic Senator Richard Blumenthall. Both Dorsey and Zuckerberg have said they are in favor of reform, in the sense that the processes are more transparent.

The problem, again, is that the consensus between both parties ends in the need for reform. Regarding the nature of it, and the problems to be corrected, there are discrepancies that are difficult to reconcile. Republicans accuse Twitter and Facebook of censoring conservative voices. The Democrats, that they are not doing enough to combat misinformation.

Both had recent examples to support their positions. Republicans have clung to Twitter’s campaign decision to restrict the spread of a controversial tabloid piece. The New York Post about Hunter Biden, son of the current president-elect. That was precisely the reason that led Graham to convene Tuesday’s hearing in October. Twitter blocked the spread of the story – based on an assumption e-mail from a Ukrainian executive to Hunter Biden, with whom the Post wanted to denounce influence peddling by the current president-elect – because it violated his policy of not disseminating content hacked. Republicans denounce censorship, and Dorsey himself insisted on Tuesday that it was a mistake and that the company corrected it immediately. “Mistakes happen more, or only, on one side of the political spectrum than the other,” complained Republican Sen. Mike Lee.

The Democrats, for their part, counted among their arguments with the recent Trump offensive, which spreads serious false accusations of electoral fraud every day on Twitter and assures that he has won the elections. Twitter adds warnings to the president’s bogus messages, but according to Democratic Sen. Dianne Feinstein, the warnings fall short. “These tweets mobilize people, make them stand up,” he defended. The resistance of Republican senators, including Graham himself, to confront unfounded allegations of fraud and recount irregularities made by Donald Trump since the election puts them in an awkward position in this debate.

Republicans have focused on criticizing the two companies’ power to moderate the global conversation, accusing them of being politically motivated, hidden behind permissive legislation. They consider that the supposed ideology of the employees produces an anti-conservative bias, but until now they have not been able to provide more than anecdotal evidence. But part of the interest of Tuesday’s audience was that it offered the opportunity to see the priorities that will guide the next Democratic administration in this battle against the excessive power of big technology. Joe Biden’s campaign has been belligerent with these companies, which he has accused of failing to act firmly against disinformation. The president-elect’s team has also been clear in criticizing the alleged monopolistic practices of these giants, in what constitutes another of the main fronts of the battle between Washington and Silicon Valley.