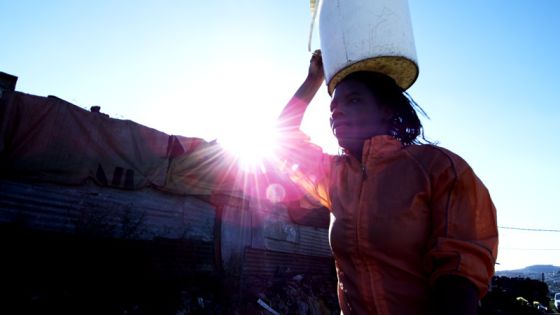 
Dear Mandela (2012) tells in an hour and a half a piece of history of one of the most important grassroots movements in South Africa: Abahlali baseMjondolo (‘inhabitants of the shacks’ in the Zulu language). Abahlali was born in 2005 in Durban (in the east of the country) with the aim of improving the living conditions of the communities living in shacks through the occupation of vacant land to provide a roof to the community members, “demanding the social value above the commercial value of urban land “and the resistance to evictions suffered by the community. Its reason for being is the 20 million people who live in townships (areas created during apartheid for the black population and where there is usually no access to basic services) of which three and a half million live in informal settlements. These are constantly demolished and evicted by the Government illegally (in accordance with article 26 of the Constitution), without offering an alternative to families who are left homeless. Such a deja vu.

Within this reality, Dear Mandela manages to infect us with the hope that the new generations have the future in their hands and that their struggle seeks a more just society: “Abahlali’s philosophy immediately caught my attention. They not only talked about what is wrong in South Africa, but they have also been articulating a deep vision of what the world could be and how we could build a society based on respect, where everyone counts. It sounds utopian but they are very practical about it. They call it ‘coexistence policy’. It consists of treating people with respect, providing them with the things – water, electricity, toilets – that everyone needs to live a decent life. It’s about the government consulting the people, rather than expelling them and leaving them homeless. ” Dara Kell, co-director of the documentary together with Christopher Nizza, explains where the idea of ​​filming the daily life of one of the main social movements in South Africa came from. “We realized that young people were increasingly involved in roles within the movement. Many of them were too young to remember the glorious day Nelson Mandela was released in 1990. They were passionate and compelling – not a lost generation at all. We couldn’t let it go. We knew we had to make the movie, ”he adds.

Far from achieving the “best life for all” that he promised in his speech on May 2, 1994 after winning the country’s first democratic elections, Nelson Mandela is still a symbol of that hope for change for a large part of the population, including young people: “I would like to meet Nelson Mandela and ask him how he feels about these unstable conditions we live in after 27 years in [la cárcel de] Robben Island for a better life for all. He is like Jesus Christ. I don’t like the fact that he was imprisoned for something that has never been achieved, ”says Mnikelo, a young man from the community, in the documentary.

And Mandela thus appears throughout the film as an icon still present in many people’s lives today: “When we were filming, the image of Mandela was often taped to the walls of the shacks. He was also present in classrooms and companies, so we started filming these images. Mandela was looking at us in a way and it was an interesting, and sometimes disturbing, way to explore his legacy and that of the architects of our fledgling democracy. We haven’t been able to interview Mandela, but his spirit was there. There is also no real letter to Mandela in the film, but it is a reminder that they did not fight just for the right to vote, but for a much broader and more radical vision of a just society. ” Kell explains what gives the title to the documentary.

The recording process was not easy. Following the meeting between the directors and Abahlali to propose that they make the documentary, their members voted on whether or not Kell and Nizza were allowed access with cameras. Yes, he won in the vote and there began a complicated process in which they had to face different obstacles: “The recording proceeded slowly, and we tried to understand what daily life is like in the settlements and what the movement trying to get. Midway through production, during a late-night gathering we were filming, the settlement was attacked by a mysterious armed gang and we had to run for our lives. The following days were terrifying: the leader of the movement, S’bu Zikode, was receiving death threats and the leaders’ shacks were demolished. Thousands of people fled the settlement with what they could carry. We had only one car nearby and we helped people escape. We felt a responsibility to bear witness to what was happening. Going through a near-death experience with them really strengthened our relationship, which has gone beyond the typical director-subject relationship. I know that we are going to be involved in their lives for a long time. “

This episode that the directors witnessed and were able to film refers to the attack on the Kennedy Road settlement in September 2009, thus showing the repression that this and other similar movements are suffering. At the same time, the documentary focuses on the daily life in the shacks, the problems and desires of various members of the community and their struggle for decent living conditions.

Despite the limited means available to directors for making documentaries, the work has gone ahead thanks to the commitment of several professionals who have voluntarily contributed their grain of sand. The reward has been the great reception that the work has had at national and international level, the projection in festivals, universities, community centers, poorer neighborhoods, the large number of awards received, etc., as well as its use by lawyers and activists. At the end of the day, this graphic document is a powerful tool to raise awareness and reach an audience outside of this reality that a large number of people in South Africa face.

Wiriko is a cultural association whose objective is the dissemination of contemporary African artistic and cultural manifestations. Develops outreach activities through an online magazine and training through a Virtual Classroom.