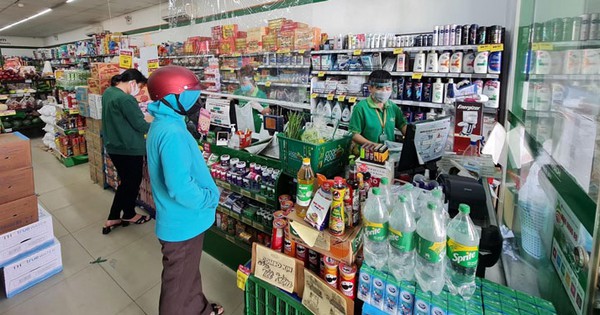 On the morning of June 20, the MM Mega Market parking lot was almost full, the number of motorbikes was especially high compared to the previous days. “Usually supermarkets welcome many customers by car, they buy in large quantities for long-term consumption. Today, the number of car passengers has increased, but motorcyclists are especially high, the ability of customers to move from markets spontaneously. (closed) to the supermarket,” said a representative of MM Mega Market.

Supermarkets and shops are ready to be filled with goods to serve people during the quarantine period according to Directive 10. Photo: THANH NHAN

Inside the supermarket, the area selling fresh food, dry food, rice, confectionery, drinking water… focuses on many customers to choose goods. Everyone pays attention to keep a safe distance, take advantage of quick selection of goods and minimize communication, then proceed to pay and leave the supermarket.

Supermarkets in Ho Chi Minh City such as MM Mega Market, Big C, LOTTE Mart, Co.opmart … recorded a strong increase in purchasing power from the evening of June 19 but not to the extent of being overloaded and jostling to buy goods as at the beginning times. started to apply social distancing in the past. Particularly on June 20, the increase was about 25%-30% compared to the previous day. At supermarkets Co.opmart, Co.opXtra… the number of shoppers increased by about 30% on the night of the 19th, but by the morning of June 20th, the number of customers had returned to normal, only some areas continued to maintain an increase in the number of visitors. . “Although the number of direct customers to the supermarket did not increase dramatically, the number of orders by phone and online orders increased by three times compared to June 19,” a representative of Saigon Co.op said.

By the afternoon of June 20, supermarkets continued to add fresh food and necessities to the shelves. Ho Chi Minh City Union of Commercial Cooperatives – Saigon Co.op has actively added fruit and vegetables to increase by 30%-40% on weekdays, increased the stock of essential items at central warehouses and supermarket warehouses, and accelerated reductions. Promotional prices for many food items on June 20 and the coming days. Mr. Dinh Quang Khoi, Head of Marketing Department of MM Mega Market system, also said that he has mobilized Da Lat agricultural product suppliers to increase harvest and transport to Ho Chi Minh City; quickly rotate some groups of goods from supermarkets in Can Tho and Dong Nai to strengthen supermarkets in Ho Chi Minh City. “Goods are enough to supply people in the city for many days, people’s psychology is also more stable” – Mr. Khoi said.

Not only going to supermarkets and shops, consumers have also increased their food purchases at traditional markets, partly because the city has disbanded spontaneous markets. The management of some grade 1 and grade 2 markets said that the purchasing power of fresh food items such as vegetables, fruits, meat and fish increased by 15%-20% compared to the previous days due to information related to Directive 10, People tend to buy more food to store. However, the overall purchasing power of the market decreased by about 15%-40% compared to the time before the outbreak. For example, Tan Dinh market (District 1) is only active on Ma Lo Street, the fresh goods business area has 2 security posts to block motorbikes from entering the market and measure people’s body temperature.

At the wholesale market, in the night of June 19 and early 20, the volume of goods arriving at the three wholesale markets of Binh Dien, Thu Duc and Hoc Mon reached 8,356.6 tons/day and night, an increase of 5.5% compared to the previous day. . In which, except for seafood products that went to the market, they decreased by 9.5%, while livestock meat, poultry, vegetables and fruits all increased by about 7%, so the goods were abundant.

Guaranteed supply in all situations

In the context of this very complicated epidemic, the Minister of Industry and Trade suggested that the City Department of Industry and Trade continue to implement the action program according to the prepared scenarios, forecast the right situation to continue. adjust the plan to supply goods to the people, especially those in the quarantined areas, and pay attention to the media so that people can feel secure. In addition, strengthening inspection activities, guiding businesses, production and business establishments in the area to comply with safe production processes during the pandemic; directing and guiding enterprises to develop scenarios to handle situations when employees are F0, F1, F2… so as not to be confused in all situations.

According to the Department of Industry and Trade, ensuring the supply of essential food and food items for the people of the city is continuous and transparent, without any interruptions or disruptions in supply, creating scarcity of goods. Localization is an important task at this stage. Therefore, the department has worked with 22 provinces and cities in the East – Southwest to exchange information, forecast market conditions, and agree on solutions to support the circulation, transport and supply of goods between the provinces. province. The Department also regularly works with distribution systems, businesses to stabilize the market to grasp the situation of goods supply; promptly implement solutions to balance supply and demand of goods, develop a plan to ensure the source of goods in response to epidemic situations and maintain the selling price of essential food until the end of 2021.

“Currently, data from markets and supermarkets shows that the supply of essential goods at markets, supermarkets, shops … is very abundant, with a wide variety of goods to meet people’s needs. In addition, In addition, businesses also implement mobile sales programs to promptly meet the needs of people, especially in areas where retail stores are temporarily closed due to a suspected case of Covid-19 infection to visit and shop. ” – Mr. Nguyen Nguyen Phuong, Deputy Director of Department of Industry and Trade, informed. According to Mr. Phuong, regulations and guidelines for epidemic prevention at markets, supermarkets, production and business enterprises … have been fully issued, the job of each unit is to strictly implement it to contribute to the fight against the epidemic. , stabilize the situation.

On the morning of June 20, at the spontaneous market, alley 54 Vu Huy Tan (ward 3, Binh Thanh district), the functional force stretched a rope to ban market meetings and broadcast propaganda on the prevention of the Covid-19 epidemic. Similarly, the spontaneous market along Tran Khac Chan Street (the section near Hoang Sa Street, Tan Dinh Ward, District 1) also no longer has fresh goods displayed on both sides of the sidewalk. Vehicles of the ward functional forces are constantly patrolling, so the compliance situation of the people is quite good.

Contrary to the above markets, at the spontaneous market on Trinh Hoai Duc and Vu Tung streets near Ba Chieu market (Binh Thanh district), the trading situation is still active, especially the “cheap raffle” fruit and vegetable stalls. Many people take advantage of buying gourds, squash, carrots, and white radishes for less than 15,000 VND/kg to gradually store food to reduce the number of times they go to the market in the coming days.

Before the feedback of many businesses about the status of some provinces and cities applying a 21-day quarantine for drivers and delivery workers returning from the city and requiring truck drivers from Ho Chi Minh City to the province to have results. tested negative for Covid-19 but some provinces only accept test results within 72 hours, some provinces only accept test results in 36 hours, even 24 hours, the Department of Industry and Trade of Ho Chi Minh City said that it will organize Organize an online briefing with 22 provinces and cities to clearly inform the situation, and at the same time propose solutions to coordinate and remove to ensure the circulation of goods.

Mr. Bui Ta Hoang Vu, Director of the Department of Industry and Trade, proposed ministries and branches to issue guidelines on conditions for organizing the transportation and circulation of goods between provinces and cities in the context of Covid-19 so that the applied by localities in a uniform and synchronous manner to ensure that the domestic production and supply chains are not broken and create the best conditions for the consumption of agricultural products and local goods.