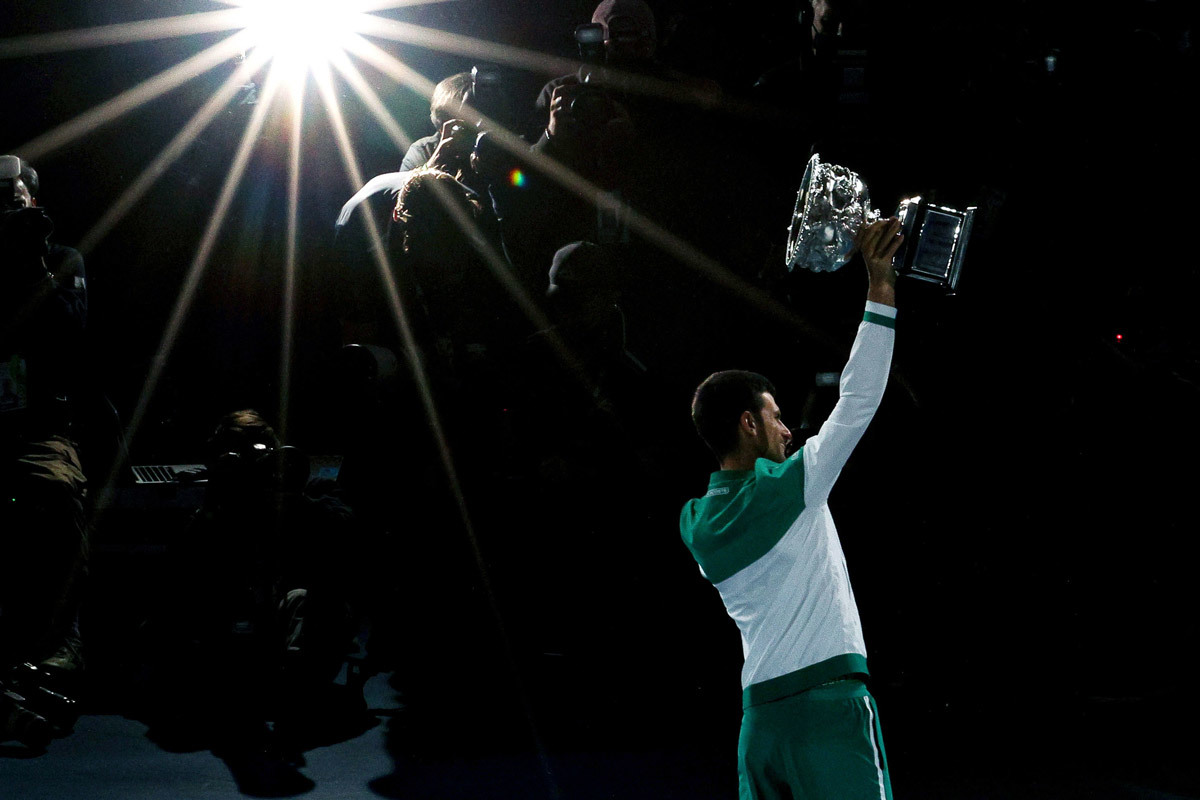 Novak Djokovic easily conquered the 18th Grand Slam title, continuing to turn the Australian Open into his own kingdom.

At the age of 33, Djokovic – the father of two children – certainly has not stopped, but also looks forward to new milestones in his career.

Except for those who love Novak Djokovic, the 2021 Australian Open final lacked drama and professional appeal.

Daniil Medvedev, the first time he entered the Australian Open final, could no longer maintain his surprise and easily fell to Djokovic who was superior in all aspects.

Before the final match day in Melbourne, Medvedev impressed with 20 consecutive wins.

The 25-year-old player ended 2020 with the ATP Finals championship in London (upstream winning Dominic Thiem 2-1), and overwhelming victories on the Australian Open journey (5 of the previous 6 games he did not lose Which set; except against Krajinovic in round 3, wins 3-2).

However, Medvedev easily strangled when facing Djokovic. The competition, if any, is only set 1. Djokovic overcame his Russian opponent by 7-5.

After losing the first set, Medvedev’s mentality dropped dramatically. As a result, Djokovic easily won 6-2 and 6-2, ending the final with an overwhelming 3-0 score.

Record continued in the tournament was born 116 years ago, with 109 held periods (including this year). Djokovic for the 9th time in his career winning hard court in Melbourne.

Australia is a real Nole kingdom!

Continue the journey of conquest

In 2016, Djokovic was at the peak of his performance suddenly declined because of his personal troubles (not only hiring a psychiatrist, he also looked to spiritualists to solve the problem).

Nole fell to the bottom in 2017, when it was eliminated from the second round of the Australian Open, and then stopped in the quarterfinals of Roland Garros and Wimbledon. At the US Open, he was absent.

Difficulties continued with the Serbian player in early 2018. At that time, he was thrown out of round 4 in Australia and failed to pass the quarterfinals of the French Open.

Djokovic marked his rise from Wimbledon 2018, then went on to win in the US in the same year.

Since Wimbledon 2018 up to now, in the 10 Grand Slam events that took place, Djokovic dominated with 6 championships. This includes the latest victory over Medvedev.

When his troubles are repelled, Djokovic is completely overwhelmed in the tennis world.

Without hitting the referee in the US last year, his performance could have been even more impressive.

It can be said that Nole’s career is two successful cycles, 2017 is the milestone of dividing time. This is the moment when he is in his second era of victory, conquering the 18th Grand Slam.

Next May, Djokovic turns 34 (his 22nd birthday) while attending Roland Garros. However, age can not become an obstacle to the Serbian tennis legend.

France will be where Djokovic challenges Rafa Nadal. Defeating the Spaniard in the opposing kingdom was what Nole wanted, to close the gap on the Grand Slam collection.

Not only that, Djokovic has the ambition to win all four Grand Slam titles in 2021, something he has never done before, to surpass Nadal and Roger Federer – who share the record of 20 Grand Slam titles.

Easily overcoming Medvedev with the score 7-5, 6-2 and 6-2, Djokovic broke his own record of 9 times to win his own Australian Open. At the same time, this is also the 18th Grand Slam title of Nole’s career.