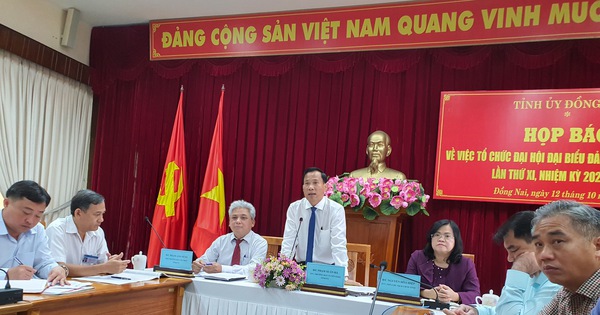 Head of the Dong Nai Propaganda Department with information about the plan to organize the XI Party Congress – Video: HA MI

Mr. Pham Xuan Ha – Head of the Propaganda Department of Dong Nai Provincial Party Committee – said the congress would take place in three days, from October 14 to October 16 at the Dong Nai Conference and Event Center.

To celebrate the Party Congress at all levels, localities in Dong Nai province have implemented 84 infrastructure projects, researching, publishing … with a total budget of over 4,000 billion VND, including 2 important projects. National points include clearance project for Long Thanh international airport over 1,800 ha (priority phase) and clearance of Phan Thiet – Dau Giay expressway.

The resettlement infrastructure of Loc An – Binh Son in the Long Thanh airport project is one of the works to celebrate the XI Dong Nai Party Congress – Photo: HM

According to Mr. Pham Xuan Ha, the guiding motto of the Provincial Party Committee for the 2020-2025 term is “Solidarity – Democracy – Discipline – Creation”, including “realizing the aspiration to become a development province in the group. head of the country “.

At the press conference, the representative of Dong Nai People’s Committee said there was a basis for “development aspirations in the top group of the country” because the province is one of the leading localities in attracting investment. Up to now, 31 industrial parks have filled more than 82% of the leased land area, creating jobs for hundreds of thousands of workers.

Dong Nai also has the advantage of Long Thanh international airport, seaport to connect the region and highways …

At the meeting, answering questions from the press about “whether the incumbent secretary will be re-elected for a new term”, Mr. Pham Anh Dung – Deputy Head of the Organization Committee of Dong Nai Provincial Party Committee – said: “The Politburo has approved the personnel project of the Party Executive Committee of Dong Nai province, in which the Secretary of the Provincial Party Committee has been considered to be eligible and qualified to continue to introduce re-election for the 2020-2025 term “.

It is known that the current Secretary of the Dong Nai Provincial Party Committee is Mr. Nguyen Phu Cuong.

Mr. Pham Xuan Ha – Head of Propaganda Department of the Provincial Party Committee – said that the province did not have a policy of giving gifts to delegates at this congress, but followed the guidance of the Party Central Committee’s Office on regimes and policies for expression.