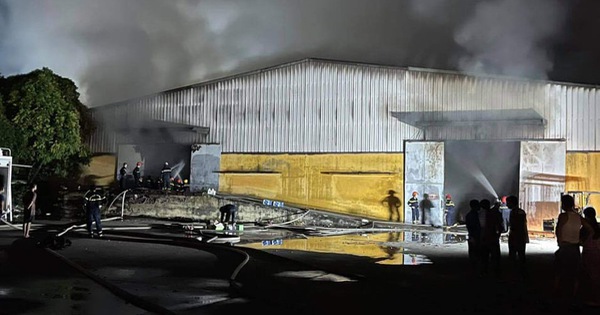 The scene of the cotton warehouse fire in the night – Photo: KHANH LINH

Receiving the news, the Police Department of Fire Prevention and Rescue and Rescue of Thai Binh Provincial Police mobilized 8 fire engines and hundreds of officers and soldiers present at the scene, coordinated with the army units, the city police street police, ward police … participate in fire fighting, do not let the fire spread to surrounding companies.

The area where the fire occurred was a warehouse containing thousands of tons of cotton waste, about 1,000 square meters in size2, which is a combustible material located deep inside the company’s campus is completely covered by smoke, so it is quite difficult to extinguish the fire.

Information with Youth Online, a leader of Thai Binh Fire and Rescue Police Department said that until 2am on June 11, the fire was basically controlled, but because the cotton blocks were compressed, the smoke was still smoldering.

Therefore, the forces are still urgently spraying water to prevent the fire from re-igniting. Due to still focusing on fighting the fire, the damage to property has not been reported yet, fortunately, there were no casualties.

It is known that Datex Import-Export Trading Joint Stock Company has stopped operating in the above area, so another company leased it as a warehouse.