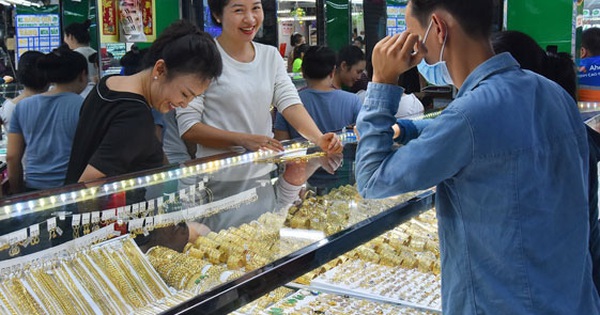 
It is no coincidence that before Joe Biden won the race for the White House, the market had predicted that the price of gold would have “waves”. And right after the official election day 3-11, the news of Mr. Biden’s victory in some important states and then approaching the US presidency, the gold price jumped to 50 USD / ounce in one trading session.

Gold is supported from stimulus packages

In June and July 2020, the Democratic Party proposed a stimulus package to soon restore the US economy worth more than $ 2,000 billion and after this information, the world gold price jumped to an all-time peak, exceeded $ 2,063 / ounce in August. In the past, in September 2011, the world gold price reached a record of 1,924 USD / ounce, which was also the period when the Democratic Party of the President at that time was Mr. Barack Obama. permission.

Therefore, it is possible that in the coming days, gold prices will continue to go up after increasing by 50 USD / ounce in just one session on 5-11. The next level of gold price may exceed 1,951 USD / ounce, hit 1,983 USD / ounce and continue going up. And yet, in November, the gold price tends to increase when the US presidential election is expected to continue to take place legal disputes, even the lawsuit of President Donald Trump, making the USD weaker …

In the long term, gold prices will continue to be supported by the Democratic Party’s policy of favoring stimulus packages to support the economy. Especially in the context of the Covid-19 epidemic still complicated, causing the death of about 300,000 Americans and a series of small and medium enterprises in this country facing difficulties.

However, according to the regulations, it is not until early 2021 that Mr. Biden officially took office. During the transition of power, it will be difficult for Democrats to enforce fiscal, monetary and foreign policies with neighboring countries. Therefore, the gold price may be affected, so there will be periods of downward adjustment depending on the US economic situation, the Covid-19 movement and other important information from other countries …

Price is difficult to increase shockingly

However, gold prices often fluctuate in parallel with other financial investment channels in the world. Gold prices may be able to re-roll the peak of 2,063 USD / ounce set in August 2020, but to reach 3,000 USD / ounce, what motivations must be seen? When gold price increases, investors will rebalance their investment portfolios from securities, foreign exchange market, commodity … Therefore, the increase in gold price is inevitable but difficult to increase shocking. In the domestic market, from now to the end of the year, gold may flourish in the jewelry segment thanks to increased demand. At the same time, the impact of world prices will help the domestic gold price go up, but it is difficult to have a sudden change.

In recent days, the world gold price was around 1,900 USD / ounce (equivalent to 53.3 million VND / tael) but SJC gold continuously anchored at over 56 million VND / tael. In fact, due to state regulations in Decree 24 on gold market management, SJC gold supply is currently very limited and not connected with the world so businesses accept high gold anchors, ready to buy. high sale. SJC gold may increase strongly but it is difficult to decrease deeply, especially after many periods, many gold enterprises are also “blamed, heavy losses” in the market due to unpredictable fluctuations of world gold prices.

The trend of buying gold rings and jewelry

While SJC gold is usually about 2-4 million VND / tael higher than the world price, the price of gold jewelry and 24K ring gold is quite close to the world price. Therefore, the recent trend is that many people who buy small, retail to save and accumulate gold have turned to buying gold rings and jewelry as “of saving”.