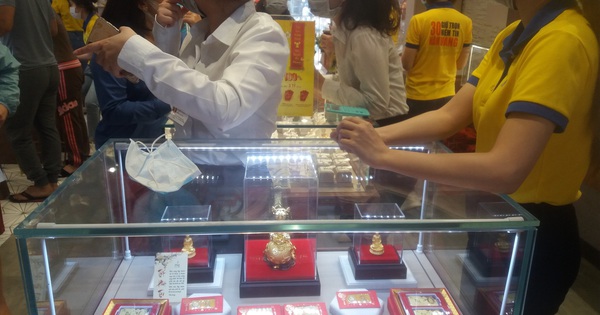 It is forecasted that, in the morning of October 10, the price of SJC gold could increase hundreds of thousands of dong / tael (Photo: THY THO)

Ending the weekend session at 2 o’clock on October 10 (in Vietnam time), the world gold price closed at 1,931 USD / ounce, a sharp increase of 36 USD / ounce compared with the opening price of the session today. before.

At the beginning of the session on October 9, gold price gradually went up, surpassed the resistance level of 1,900 USD / ounce (at 11:30 a.m. in Vietnam time), to 1,912 USD / ounce, but only within the next 60 minutes. again fell to 1,905 USD / ounce. At 14:00, when the European market began to trade, many investors increased their purchasing power, pushing the price of gold to $ 1,918 / ounce. Immediately, a number of other investors sold out, forcing the gold price to fall back to $ 1,915 / ounce. However, at 19 o’clock – the time when the investors in the US started trading, the purchasing power suddenly increased, the price of gold stood up, plunging to 1,927 USD / ounce. After that, the price of gold somewhat cooled down and by the beginning of October 10, it continued to increase to $ 1,931 / ounce

Gold prices increased sharply when the US President announced the continuation of negotiations with the US Congress on a new economic stimulus package; At the same time, Mr. Donald Trump revealed that the chances for the parties to reach consensus on an economic stimulus package worth $ 1,800 billion are very high, although he suddenly asked to stop negotiations until after the presidential election. 3-11).

Immediately, investors put their capital into gold, reducing the purchasing power of USD, making this currency weak compared with many other strong currencies. They continued to speculate that the US economy still takes a lot of time to grapple with the damage caused by Covid-19, the US Government will strongly increase the money supply, inflation will rise and make the USD continue to weaken. moreover, it will benefit the gold price in the future.

In recent days, investors have shown signs of holding gold to follow the latest information from the owner of the White House, often strongly affecting the price of gold. For example, in the trading session lasting from the night of October 8 to the morning of October 9, some investment funds bought 1 ton of gold; SPDR Gold Shares, the largest gold investment fund in the world, “put on a standstill” after standing out of the market in the previous session.

Analysts forecast sensitive issues surrounding the new economic stimulus package, the presidential election results may be controversial and cannot be resolved soon after the election day, which will cause gold prices in the short term. term increases and decreases suddenly.

Meanwhile, the World Gold Council (WGC) said that most large-sized investors who invested in gold wanted to “store” this precious metal. The latest WGC report shows that in September 2020, the need to hold gold increased by nearly 68 tons. Accordingly, investment funds in the US increased the amount of gold held by 34.6 tons. And funds in Europe have bought more than 26 tons after they sold out in August 2020. In Asia, investment funds also increased the amount of gold held by nearly 7 tons.