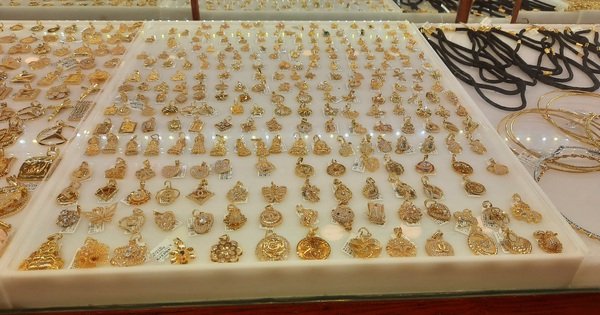 Gold price continued to increase but not significantly (Photo: THY THO)

Opening on October 16 (according to Vietnamese time), gold price traded at 1,909 USD / ounce, increased by 6 USD / ounce compared to the same time of the previous day was 1,903 USD / ounce.

At the beginning of the session on October 15, gold prices continuously fluctuated in the 1,900-1,904 ounce range. After that, the price of gold dropped sharply to 1,890 USD / ounce and continued to increase and decrease by 5-10 USD / ounce for many consecutive hours. Around 22:00 Vietnam time, because investors gradually increase purchasing power, by dawn on October 16, gold prices climbed to $ 1,909 / ounce.

Gold prices increased slightly in the context of stock markets in the US, Europe, Japan, Korea … “red” to the floor, after the number of Covid-19 cases in some countries in Europe increased dramatically, causing France to issued curfew the capital Paris and 8 other major cities. Accordingly, many people have converted their capital from stocks to gold. Meanwhile, the USD rose in comparison with many other strong currencies, causing the rise in gold price to slow down.

Although the price of gold goes up, at this time, gold “players” are cautious because they do not know what factors the price of gold will be affected by. In fact, the market has not received any information about the time when the new US economic support package will be deployed. Especially when President Donald Trump expressed his resolute attitude to members of the US Congress that he did not step back until an agreement on the economic assistance package was reached, aimed at fending off the damage caused by the epidemic.

The latest cautious move was in the session from October 14 to the morning of October 15, a number of large investors bought only 1.8 tons of gold. Private fund, the world’s largest gold investment fund, SPDR Gold Shares, bought 0.29 tons.

In the long run, analysts believe that gold prices have plenty of room to go up. That financial support from governments and central banks of many countries will be maintained and supplemented. In particular, the US will continue to pump more money to revive the weak economy due to Covid-19. Then, inflation in the US will increase, meaning the US dollar will depreciate globally, in favor of the price of gold. Even, there are opinions recommending investors to buy gold when the price falls and then expect the US economic stimulus package to pass after the US presidential election will help the gold price go up.

In the domestic market, the price of SJC gold this morning also increased again following the upward trend of world gold.

The difference between buying and selling prices of gold continued to be narrowed by businesses to about 350,000 VND / tael.

On the foreign currency market, the central exchange rate this morning announced by the State Bank at 23,201 VND / USD, unchanged from yesterday. USD price at commercial banks continued to be stable at 23,070 VND / USD bought in, 23,270 VND / USD sold.