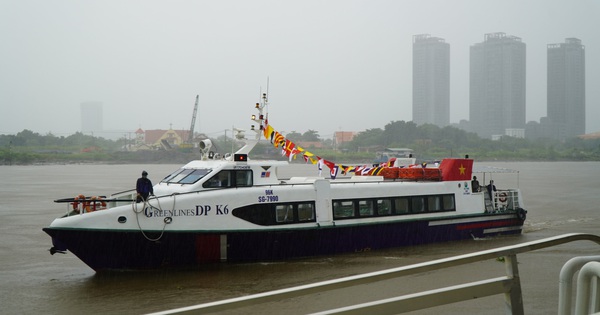 
Explaining that the train departed from Ho Chi Minh City at 7 am but returned at 5 pm, at a press conference on the afternoon of July 19, a representative of the Department of Industry and Trade said that it was the first time to test this form of transport. Therefore, the parties involved have not fully calculated the arising situations.

“This is a high-speed train running the Ho Chi Minh City – Vung Tau route, this route has few small trains, so the speed is very fast. When running the Western route, there are many small ships and boats, so it is forced to slow down much slower. much more than required because if running at high speed, it will create big waves, potentially endangering people’s small ships.In addition, logistics work is not good, when the ship arrives at the port in Tien Giang, the goods will have not gathered enough to transfer to the ship,” – the representative of the Department of Industry and Trade stated the reason.

According to the Department of Industry and Trade, the practical experiences on the first day are the basis for the organizers to learn from experience and work again with the parties to coordinate better. The ships must depart earlier, businesses must calculate to gather goods at the port earlier to ensure the delivery schedule to Ho Chi Minh City.

“In the initial stage of implementation, the plan for transporting essential goods by waterway (blue waterway) still has many contents that need to be supplemented and adjusted; businesses are not familiar with the new method and have to adjust the logistics plan. However, this is a necessary additional solution to ensure continuous and smooth circulation of goods, without breaking the chain of goods supply between Ho Chi Minh City and other provinces and cities in all situations.” – representative of the Department of Industry and Trade said.

On the first day, agricultural products are unloaded from the ship to be sold at Bach Hoa Xanh store system

The organization of transporting essential food goods such as food, foodstuffs, necessities, medical supplies and equipment, etc. from the western provinces to Ho Chi Minh City by waterway was officially applied from July 19. under the direction of the Ministry of Transport, the People’s Committee of Ho Chi Minh City and other provinces and cities; the close coordination of the Department of Industry and Trade, the Department of Transport in the relevant localities.

Initially, Greenline supported vehicles and operations, Region 2 Petroleum Company supported all fuel, businesses proactively provided loading and unloading costs. After that, Greenline negotiates reasonable costs with organizations and individuals that need to transport goods (in case the business has a need). According to calculations, the total transit time from Ben Tre or Tien Giang to Ho Chi Minh City is 4 hours.