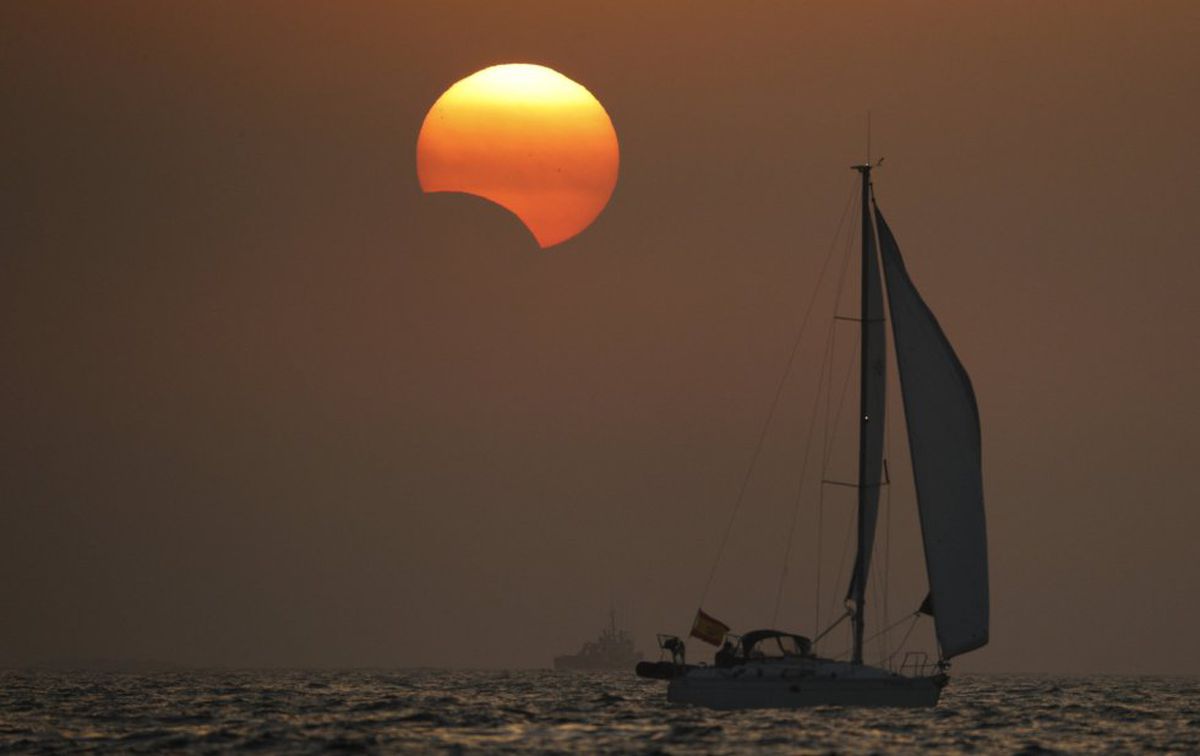 During the morning of Thursday, June 10, between 10:48 and 12:44 (depending on the territory), what is known as a partial eclipse of the Sun will take place in Spain, in which the Moon will cover a small portion of our star. This phenomenon, which occurs when our satellite is placed between the Sun and the Earth, will be visible both on the Peninsula and in the Canary and Balearic Islands, but it will hardly affect the brightness of the day. Experts remember that it is important to use protective measures to observe this eclipse, as it can cause serious injury to the eyes.

The eclipse will be visible from the entire Peninsula, although depending on the territory it will begin at a different time. For example, in Pontevedra, the city where it can be seen before, will begin at 10:48 and end at 12:39. In the Balearic Islands they will have to wait until 11.31 and they will be able to contemplate it until 12.13. In Madrid, the eclipse will be visible between 11.01 and 12.29. You can check the hours of all the provinces in this table.

Depending on the territory where we are, the percentage of the Sun that will cover the Moon will also vary. At its peak, in A Coruña our satellite will cover 13% of the solar disk. In Madrid, this percentage will be 4.7%, and in Valencia, 1.7%. The further south we go, the lower the percentage of solar disk that is covered, although the differences will not be very great. Outside of Spain, in northeastern Canada, in northern Greenland, in the Arctic Ocean, and in northeastern Russia, it will look like an annular eclipse. In these cases, the Moon completely covers the Sun, except for the outermost part of the solar circumference, which gives it the appearance of a ring.

For astronomers, this phenomenon is still very interesting. Rodrigo González Peinado, astrophysicist at the Madrid Planetarium, explains it like this: “It is an important eclipse, which occurs rarely and which will be seen from all over Spain.” The last partial solar eclipse that could be seen from our country occurred on August 21, 2017, although when it occurred during sunset it was difficult to observe it. The next one is dated October 25, 2022, although this can only be seen from the northeast of the peninsula and the Balearic Islands.

The next eclipse is dated October 25, 2022, although this can only be seen from the northeast of the peninsula and the Balearic Islands.

González Peinado recalls that there are several options to enjoy this eclipse safely. The first alternative is special glasses with approved filters that block harmful sun rays. The second possibility is to use the projection technique, which consists of projecting the light that comes out through the telescope’s eyepiece onto a sheet or a white screen. “There you can see how the Moon, little by little, covers the disk of the Sun,” explains the astrophysicist. The third option is to use an optical glass, metallic black polymer, or Mylar-type filter. These devices, which are placed in the mouth of the telescope, allow us to filter the rays that are harmful to our eyesight, although the latter must be known to use them correctly. In case of not being able to opt for any of these alternatives, the Madrid Planetarium will broadcast the eclipse live on YouTube.

Activities in other cities of Spain

In addition to the live broadcast by the Madrid Planetarium, some museums and observatories will also monitor the eclipse. For example, the Basque Science Museum is going to put a telescope at the entrance of the site at the disposal of visitors. The aforementioned projection technique will be used and it will be outdoors to maintain the covid-19 protocol. It will not be necessary to pay any entry.

At the Castellón Planetarium, two telescopes will be used: one to make a projection and the second for direct observation. In this case it is also free, although it is necessary to register in advance through the Castellón City Council website.

If the weather permits, two telescopes will also be placed in the outer esplanade of the Navarra Science Museum to be able to follow the phenomenon. If the weather is bad, the observation will be replaced by a talk about eclipses. In any case, it will not be necessary to reserve a seat or pay for admission.

The Valladolid Science Museum will also use projections. From 11 in the morning in the North Plaza of the Museum, the director and the planetarian of the center, Inés Rodríguez Hidalgo and Carlos Coello, respectively, will explain the details of the phenomenon to the attendees. There will be a capacity control, but it will not be necessary to pay an entrance fee. Between 11.35 and 11.55, the peak of the eclipse in this city, the event will be broadcast through the museum’s Facebook page.