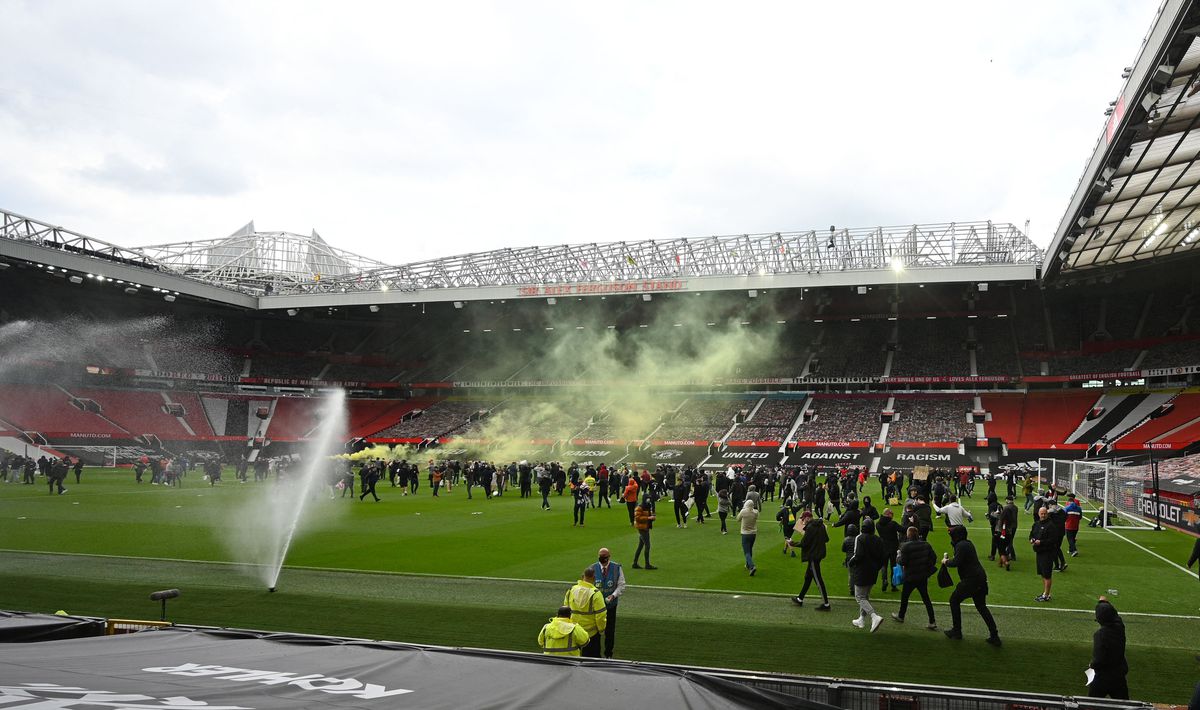 Fans of Manchester United, England’s richest and most successful club, redoubled their protests against the owners with an invasion of the stadium that took police by surprise on Sunday. Thousands of people gathered to rant especially against Joel Glazer, frustrated vice president of the European Super League. Columns of fans converged after noon in the vicinity of Old Trafford stadium, in the Stretford district, and outside the Lowry Hotel, in central Manchester, where the team was staying hours before traveling to the pitch to play. the league game against Liverpool. The meeting, scheduled for 5:30 p.m. Central European time, has been delayed due to the incidents.

The crowd stopped the bus from leaving with the players as hundreds of protesters streamed into the stadium overflowing with club employees in charge of security. The invasion threatened for an hour to suspend the celebration of the match for another day, but that did not seem to matter to the fans. United supporters have been expressing their disgust for two weeks towards the brothers Avram and Joel Glazer, owners of the club since 2003, coinciding with the announcement of their entry into the Super League conceived by Florentino Pérez, president of Real Madrid, and the JP Morgan bank. The project, which in its founding charter included Real Madrid, Barcelona, ​​Atlético, United, Arsenal, Chelsea, Liverpool, Tottenham, Manchester City, Inter, Milan and Juventus, intended to split from the UEFA Champions League to form a company parallel access restricted.

“Millions to the Glazers, but when it rains the roof leaks,” read the sign carried by a fan, referring to the American owners, who also own the Tampa Bay Bucaneers, champions of the NFL, as well as real estate conglomerates and the Zapata Offshore oil company, founded by George HW Bush. “This is your funeral, not ours,” read another banner, referring to the words of Florentino Pérez, president of the Super League, who declared that without the model that he proposed the football industry would die.

“50 + 1”, pointed out another poster, in relation to an idea that has caught on in the imagination of an important sector of the English fans. The proposal to redefine a new club property law under the 50 + 1 formula, advanced by the conservative government of Boris Johnson, would mean importing the German model to England, which guarantees the distribution of the majority of the shares among the majority members , to avoid unitary control by unscrupulous individuals.

Neither the resignation of Ed Woodward, the president, nor a letter from Joel Glazer apologizing for the failed attempt to found the Super League, closed the open wound in the social mass. United supporters are not revolted in outrage against the economic situation of a company that continues to be the most profitable in British football (580 million euros in revenue at the end of the 2019-20 financial year). Nor do they seem enraged by the sporting march of the team, second in the Premier and virtual finalist in the Europa League after beating Roma 6-2 in the first leg of the semifinals. The fans exploded for the Super League.

“The Glazers, the Pérez, the Laporta … they are dangerous”

Images from inside Old Trafford broadcast by Sky showed fans strolling through the grass, some waving corner flags, others playing ball, taking photos or throwing smoke bombs. The protesters took a walk from goal to goal before the hostesses finished peacefully evicting them, apparently thanks to sprinkler irrigation.

Less peaceful was the dissolution of the demonstration outside the stadium. According to Sky Sports, people did not leave the esplanade until the police loaded their horses. Gary Neville, the former United captain who currently serves as an unofficial commentator and spokesman for the revolt, joined the protest on the field. “All football fans should join today in what the United supporters have done,” Neville said, from the grass at Old Trafford, microphone in hand. “What the Glazers and the owners of the other 11 clubs involved [Liverpool, City, Tottenham, Arsenal, Chelsea, Madrid, Atlético, Barcelona, Milan, Inter y Juventus] they have wanted to do has been to lead European football to starvation, destroying the ethics of the competition, “he said. “The Glazers, Pérez, Agnelli, Laporta … are dangerous because they threaten the idea of ​​equal opportunities and fair play in European football. I do not accept Glazer’s apologies. He said he wanted to rebuild trust with fans. What confidence? He never communicated with them, he never spoke to them. It’s okay for us to protest. But tomorrow we must legislate because there are six people in English football who have to be deprived of power ”.

“We wanted to cause a great disorder and we have succeeded,” declared a fan to the PA agency. The Premier reported that many supporters invaded Old Trafford interior areas where footballers pass on their way to the field and changing rooms. The breach of the security protocol imposed to curb the Covid-19 pandemic forced the organizers to disinfect the facilities once more before allowing access to the equipment.