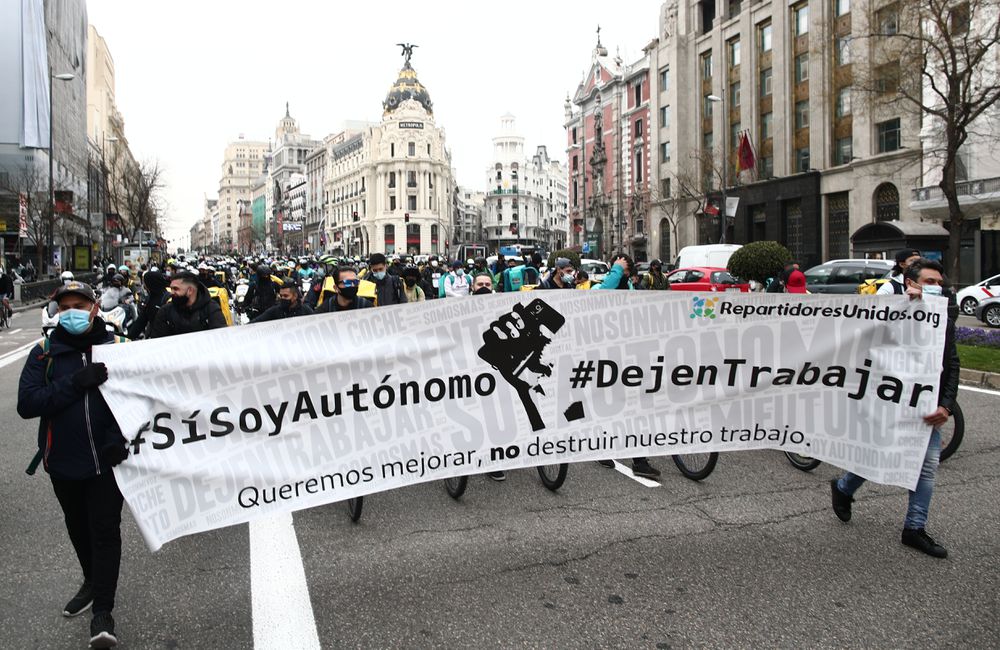 
Hundreds of distributors of digital platforms have traveled this Wednesday a dozen Spanish cities against the so-called law rider encouraged by delivery companies. The marches have been called by associations in favor of maintaining the autonomous work model for motorcyclists and cyclists of home delivery applications, and they take place in the final stretch of negotiations between the Government, the unions and the CEOE employer. Although, at the last meeting, held three weeks ago, a pre-agreement was reached in which the three parties accepted that the distributors of these companies (Glovo, Deliveroo, Uber Eats, Amazon and Stuart) become salaried.

This Tuesday, less than 24 hours before the start of the demonstrations, the companies, which have been defending the autonomous work model for years because it allows them to use delivery men without taking charge of their social contributions, recalled through communications to their riders that on Wednesday these marches were going to be held. “Hello, tomorrow, March 3, a demonstration by the delivery group will take place in Madrid,” Glovo wrote to his fleet, and announced a cut of the delivery service in the area of ​​the demonstration for two hours. Along the same lines, Uber sent an email in which it cited the demonstrations and detailed the route they would follow.

“The demonstrations are born from the platforms to defend their work model,” they denounce from the UGT, one of the unions that pressures for these riders become wage earners, and criticize that it is the companies “that are mobilizing people and are using their structures to tell people what to do.” From Glovo they deny that the messages sent this Tuesday were in support of the demonstrations, but that it is a common practice when there are traffic stops in cities, and they cite previous occasions in which they sent these alerts, such as in the protests in Barcelona after the arrest of Pablo Hasél or the storm Filomena.

More evident was the statement from Stuart –a package delivery company that operates in Madrid and Barcelona–, in which he encourages his collaborators to take to the streets: “Stuart’s team wants to convey a message of support to the self-employed delivery men who want to demonstrate this Wednesday (…). In addition, we wish to inform that Stuart shares the motivations that have led to the call, ”the email reads.

It is not the first time that these platforms have encouraged their staff to take to the streets to pressure the Government. In November, the Glovo management made a call in an internal meeting with its distributors to make themselves “noticed” before the Executive, shortly after the meetings between Labor and social agents began to shape the so-called law. rider. “It seems that decisions can be made about what is best for the couriers without consulting you. And we have to try to change this … or you have to try to change it, ”Sacha Michaud, Glovo’s co-founder, said at the time. “Making yourself heard will allow administrations to understand that there are many people who want to continue doing their job as they do today,” added Glovo’s policy officer, Miguel Ferrer.

From the Professional Association of Autonomous Riders (APRA) and United Deliverers, the organizers of the demonstrations – which have been attended by some 2,000 people throughout Spain according to the organizers – have asked this Wednesday that the regulations allow “to be autonomous if the dealer is like this He prefers it for economic, flexibility or conciliation reasons ”, as explained in a statement the spokesman for Repartidores Unidos, Gustavo Gaviria, in statements collected by EFE. For his part, the president of APRA, Jordi Mateo, believes that “it is not possible to move forward” if there are “trade unions that do not have representatives in the group of distributors, an employer that only listens to companies and a government that passes from Workers”.

The Minister of Labor, Yolanda Díaz, already answered this Tuesday night on Spanish Television to the demands of the pro-autonomous associations: “The doctrine of the Spanish courts says that one does not choose the legal nature of the employment relationship, as has been said the Supreme Court (…). This is not chosen, one is autonomous or salaried based on certain requirements ”.