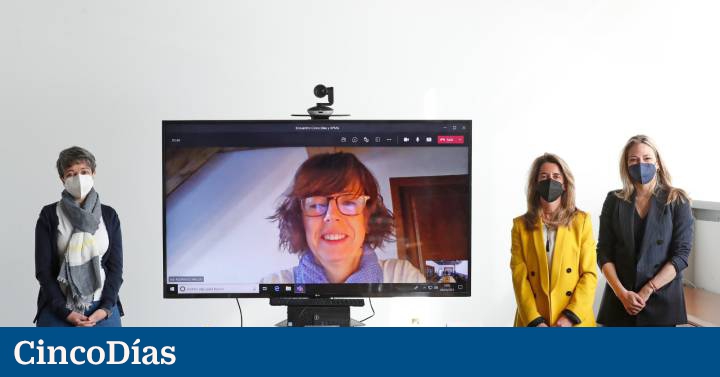 Years ago, society did not imagine that it could seal documents using a digital signature, solve a domestic problem thanks to a chatbot or play music by requesting the songs on a smart speaker installed in your home. Now, instead, all this is a reality thanks to technology and automation. But its advantages are not limited to the home environment, but are becoming increasingly important in the work environment, where it is already taking a step further, towards hyper-automation.

Hyper-automation is the sum of different base technologies, such as artificial intelligence (AI),low-code, data management platforms, machine learning or robotic process automation (RPA), which serves to automate not only repetitive tasks, but also the most complex ones. For this reason, it is a fundamental element to ensure the future of companies and this was demonstrated by the four participants in the meeting organized by Five dayswith the collaboration of KPMG under the title Hyper-automation: the total evolution of business processes.

A priori, implementing this type of tool may seem complex and expensive, but according to Eva García, partner responsible for data analysis and AI at KPMG Spain, “it is something that all sectors can apply, including SMEs.” García highlights banking andretaillike the sectors that are leading the way in the use of this type of hypertechnology, but they are not the only ones. “In Spain all sectors have begun to introduce some automation” in their processes, he assures.

In the energy sector, hyper-automation has been a reality for years. It began at Repsol in 2017, when an ambitious five-year digitization plan began. Ana Torres, director of IT and digital for the company’s corporation, explains that it has been one of the main focuses of the project. “We started in the corporate areas with formulas to improve our billing process, supplier management, small simple tasks related to customers. As we have been incorporating other technologies, such as character recognition and unstructured information, we were able to leave the scope of the corporation in order to reach the business areas ”.

The results are already visible. Thus, for example, they have achieved that the more than 25,000 monthly customer inquiries received by the Repsol service center are analyzed, segmented and referred to the expert who can best solve the problem in the shortest possible time. Or, in the case of the industrial area, improve, for example, plant safety through image recognition that allows them to make decisions in real time.

“It is about applying it to tasks of increasing value and avoiding mistakes”, Paloma Ladrón de Gevara, Santalucía

Improving the customer experience is one of the basic principles of NH Hotel Group, according to Alu Rodríguez, SPVbusiness transformationof the group, who participated telematically in the meeting. The other is operational excellence. “We think that these automation and robotization tasks could help us because what our employees do best is give good customer service, but much of their day to day becomes repetitive tasks.” In his case, the implementation of this type of technology has led to improvements at the operational, business and customer experience level. “That when you go to do thecheck-inthe receptionist looks you in the eye, that is to improve your experience, instead of being obsessed with finding you in a database ”, explains Rodríguez.

Another sector that is already benefiting intensely from hyper-automation is the insurer. Paloma Ladrón de Guevara, director of processes and digitization of Santalucía, considers that “it will be key” to accelerate the improvement. In fact, the insurer launched its digital transformation plan at the beginning of 2020 and, contrary to what it might seem, with the pandemic there has been a “great accelerator”, according to it. Throughout the Covid year, the company has robotized and automated processes in different areas, from purchases to management of material and financial requests or changes to the policy. “It’s about applying it to increasingly valuable tasks and avoiding mistakes,” says Ladrón de Guevara, “or doing tasks that you couldn’t before, a robot in the end works 24 hours a day, 7 days a week.”

Even so, if all the participants in the debate agree and insist on something, it is that hyper-automation is not made to replace workers, but to help them. “When you talk about automation, and more if you add the prefixhyper, the people who are part of the companies are initially scared. We have realized that we really had to convey a message along the lines of: look, we don’t want to take your job away from you, what we want is to help you. Help you feel better, so that you see that the activities you do give you something more and that you be more efficient, ”says Torres.

For Alu Rodríguez, from NH, this “fear” is one of the main barriers to overcome. The solution, he says, is to get involved and explain it well. “When you go the first time and tell an employee that you are going to simplify their task, they think: how many resources are you going to take away? But what we really want is to take that time away from the tasks that they don’t like so that they can dedicate it to what they always say they have to do running for lack of time. The idea is not to put a robot to do things, but for you to do the job much better ”, acknowledges the NH representative. And he emphasizes: “When they realize that, they open up and everyone wants to do it.”

“In Spain all sectors have begun to introduce automation”, Eva García, KPMG

Torres, from Repsol, points to good communication and good change management as keys to the acceptance of this technology among the workforce. With this objective, Repsol has started a training campaign called Data School, with which it will train more than 800 people in technological learning in 2021 around the world. “There is no one here who is going to stay on the road, we need everything,” explains Torres.

It is, therefore, that technology and people work together in the same direction, providing improvements on both sides. “In this case, people can do what we do best, which is to think, be creative, talk and interact with other people. That is what we are good at and what we have to do, ”says García, from KPMG.

The business advantages of hyper-automation are many: reducing costs, advancing sustainability, optimizing resources, adapting to customer needs. But before betting on this type of technology, you have to be very clear about where you want to apply it and for what. You have to think before. In Saint Lucia, that has been the main focus from the beginning. “It is true that we are going to put a lot of parts, capacities, technologies … but filling the Ferraris parking lot is absurd, it is necessary that the business understand what objectives we are looking for, where we are going and see what is the best technology for it, which in some cases it will be a Ferrari and in others a Panda ”, indicates Ladrón de Guevara.

The same occurs when transferring the tools to the different business areas, since as indicated by the director of processes and digitization of the insurer, the needs are very different in each case. An example of this is the virtual assistant. “It is something very positive that without a doubt we all have to have but it is not valid for everything. In Santalucía we have many types of insurance and one of the main ones is death. Imagine what it is like to be attended by a virtual assistant when a relative has died, it is clear that it is not the place. It is very different from if it is a home accident ”, he asserts.

“Sometimes you do robotisations and then you see that it is not necessary”, Alu Rodríguez, NH Hoteles

Therefore, measuring the impact is essential to know if the response is being as expected. Sometimes, as Rodríguez, from NH explains, it is not and we have to put the idea aside: “We think of a virtual agent in the reservation center so that when I have to cancel a reservation I don’t have to wait, but the robot helps me and it does it faster. The client did not value it and preferred to speak to a person. Sometimes you get to do robotizations and then you see that it is not necessary ”.

In this sense, it is also possible that technology is present as a mere support of the person. That’s the idea behind one of the automation projects that KPMG has already launched. “Thecall centerit is still a person, but through the analysis of voice and tone, a tool tells you with smiley icons if the client is happy, angry, their state of mind, and how you can help them ”, says García.

Automation is present in more and more areas of life. “Everything that is capable of being automated will be automated,” says Torres, from Repsol. For this reason, it is important that companies take steps, even if they are small, in that sense. Because as the coronavirus crisis has shown, sometimes adapting to technology can save a company. “We have to be flexible because we are not able to predict the future,” says Alu Rodríguez. And he specifies: “They are the rules of the game and we have to play with them.”