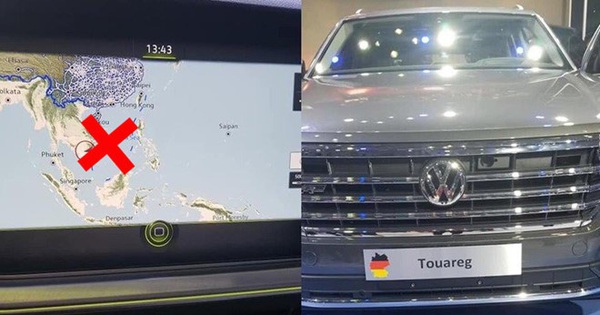 
From December 10 to now, acts of import-export, trading in temporary import for re-export, in transit, or transferring goods with images and contents shown are incorrect sovereignty The country or having other contents affecting the security, politics, economy, society or diplomatic relations of Vietnam may be fined up to 100 million VND.

The above contents are specified in Decree No. 128/2020 / ND-CP of the Government on sanctioning of administrative violations in the field of customs, which has just been signed by the Prime Minister.

Map with “cow’s tongue line” appeared on Volkswagen Touareg car on display at an exhibition in Ho Chi Minh City in November 2019.

Accordingly, the import and export of goods has incorrect images and content sovereignty The country or goods with other contents affecting the security, politics, economy, society or diplomatic relations of Vietnam shall be fined from 10 million VND to the maximum of 100 million VND, depending on on the quantity of the goods.

The highest fine of VND 100 million will be applied in case of violation exhibits having quantity of 100 product or goods units or more.

Decree 128 also clearly stipulates that the additional sanction is confiscation of material evidences of administrative violations, which are goods with images or contents showing improper national sovereignty or having other contents affecting security. political, economic, social, diplomatic relations of Vietnam.

At the same time, forcible payment of an amount equal to the value of the material evidence which has been illegally sold, dispersed or destroyed, for acts of violation specified in this Article.

Also according to this Decree, the act of exporting, importing, and trading in temporary import for re-export, transit, and transfer of counterfeit goods originating in Vietnam also has the highest fine of 100 million VND.

Previously Newspaper Workers reflected, in November 2019, the customs agency discovered that in the shipment of 12 imported cars, there were 7 vehicles on the navigation screen displaying the suspect map of “cow’s tongue line” violating sovereignty Vietnam.