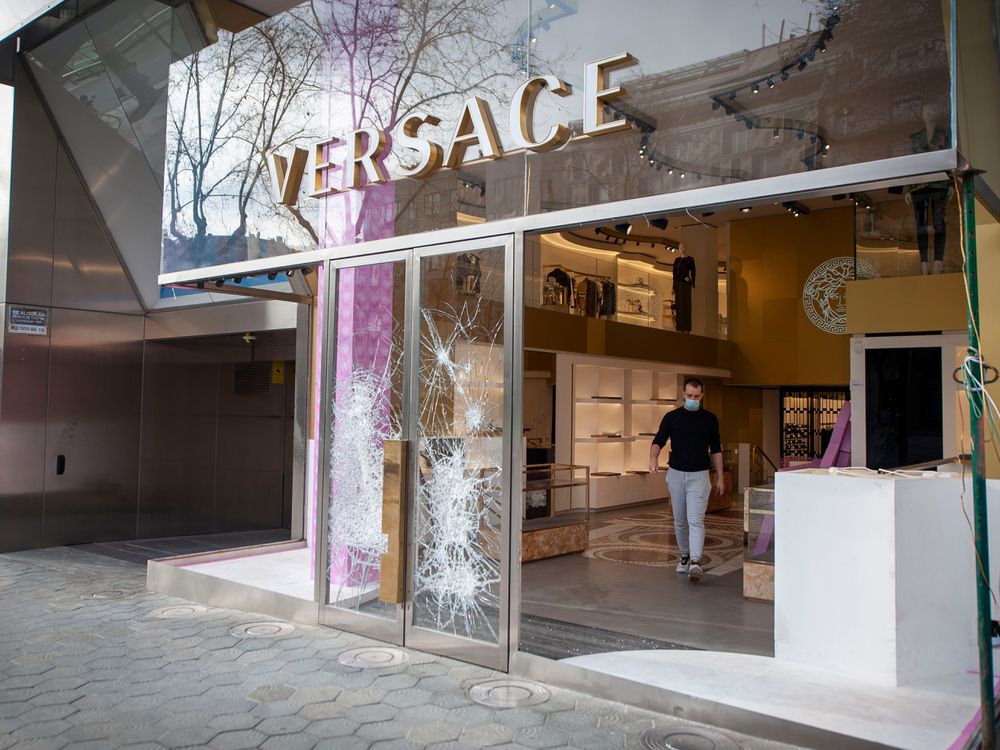 Xavi Martínez observes the damaged glass in the shop window from inside the Mango store on Passeig de Gràcia in Barcelona. “They tried to get in and they couldn’t. But now we have to change all the glass ”. Martínez is one of the many store managers who assess the damage to his premises along the emblematic shopping promenade and in the center of Barcelona after the fifth night of altercations during the rallies against the imprisonment of rapper Pablo Hasél. The damage caused these days adds to the difficulties of the sector to survive a year of pandemic and evoke the riots of October 2019, after the ruling of the you process. “They are being difficult times”, laments the manager of the store.

The scene repeats itself along the entire Passeig de Gràcia and Gran de Gràcia until it reaches Plaça de Lesseps. Broken glass, graffiti and curious shop windows taking photos. A couple of motorcycles are still lying on the ground, burned, waiting for someone to remove them. “A demonstration can be held, of course, but after nine o’clock at night it is already a crime,” says Martínez.

Security guards watch in front of different shops on the promenade so that no one sneaks inside. At the Versace store, however, the guards did not arrive on time. “They have stolen everything on display,” complains Vincenzo Bruno, the manager of the store. “It was of an approximate value of between 40,000 and 50,000 euros.” The first four nights they covered the windows with wooden plates that must be installed every day and after a quiet Friday, they trusted that on Saturday the protests would also go down. But the opposite happened and now Bruno is looking for alternatives with the glassware operators to even cover the displays on an upper floor. “I do not know when we will have it fixed,” he says.

The Passeig de Gràcia Association, which groups 180 shops on this street in the center of the city and its surroundings, considers that the damage caused in the riots will amount to “several million”, and believes that they are the result of “the irresponsibility” of various political groups . The president of the association, Luis Sans, assured Efe that the merchants are “absolutely dismayed” by what happened. “In some way, this escalation of violence was seen to come because there has been great irresponsibility on the part of politicians and political groups in not condemning the violence from the outset. This is not about the right of expression and demonstration, it is about violence. The Barcelona City Council values ​​the damage caused by the five nights of protests at 900,000 euros. Those caused on Saturday are valued at 129,450 euros, reports Alfonso L. Congostrina

Martínez agrees with Sans: “I miss a hard hand because they campaign with impunity,” and again points to the windows. “This history repeats itself. Politicians do not support the security forces, which is what they are for. In Russia this would not happen; on the second day, the problems would end ”. According to data from Mango, the decrease in store visitors is 60% due to the impact of the pandemic. The losses are global: at Versace, sales have fallen 40% since January 7 due to commercial restrictions imposed by the Generalitat, despite operating online.

The altercations widen the wound of the pandemic in a particularly touristy area that suffers the economic halt like few others. “This is not what it was. Everything has gone down ”, summarizes Vivian Ávila, 47, a neighbor of Urquinaona, the nerve center of the demonstrations against the sentence of the you process. The crisis left her unemployed because the winery where she worked closed in July. “And I do not collect unemployment.” Ávila feels that the city center always pays for damages when there are demonstrations, such as on Saturday, when protesters broke some of the windows in the Palau de la Música; but he understands that behind the altercations there is a global boredom. “People are very sensitive to everything that happens. No job, this guy [Hasél], the king emeritus … There are many things ”. The pandemic and the lack of tourists has made crime even more visible, he explains. “Now it is even more visible without tourists. My internet repeater has been broken twice and there are very conflicting people. We want to get out of here ”. But he knows that without work it will not be easy. “I am paying a mortgage and I need to work. I have even signed up to take care of the elderly ”.

In the neighborhood, the feeling is one of uncertainty to control the altercations that come after the demonstrations. “Those on Saturday were more intense than the other days, but they were not like those on you process”, Explain Núria and Francesc, who are walking near Plaza Catalunya. “The protesters generally do nothing, the problem is the satellite groups that act separately, and you also have to take into account how the police act. There is a lot of unrest and inequality. Young people do not have jobs and you have to listen to them “