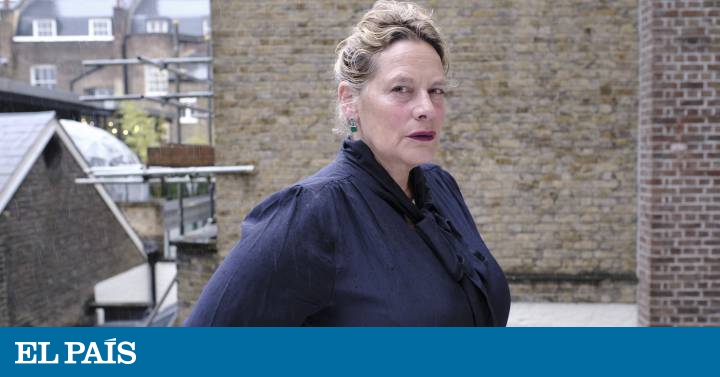 Until she was fifty years old, Deborah Levy (Johannesburg, 1959) had devoted herself to literature and theater. He has written for the Royal Shakespeare Company and two of its books, Swimming home and Hot milk, they reached finalists for the prestigious Man Booker Prize. But the divorce from her husband, with whom she has two daughters, and the consequent search for her own freedom in a patriarchal society designed to prevent her, inspired what she describes as “an autobiography under construction”, two books written from a decidedly feminist. Random House Literature now publishes both, Things I don’t want to know and The cost of living. “Women in their 50s and 60s are invisible in the literature,” says Levy. “I wanted to put light.” On Tuesday he will give a talk at the CCCB in Barcelona: With his own voice. Language, literature and the politics of silence.

The appointment is at your agent’s offices in Bedford Square, London, in a beautiful Georgian building. Levy wears a curious hairstyle: he has gone to the trouble of fluffing his hair but with a touch of disheveled. The look falls alone to his rococo shoes. “Its raining cats and dogs!” (it is pouring rain), he says spitting out the s as if they were raindrops. His accent is a reminder of South Africa, where his family went into exile when he was nine years old. They left behind the humiliation they experienced after their father’s imprisonment for five years in retaliation for his fight against apartheid.

QUESTION. You define the role that women have traditionally played as “the architect of the happiness of the rest of the family.” She often forgets herself.

REPLY. It is an act of extreme generosity. The woman has to search within herself for another gift. Let it not just be sacrifice, eternal patience, endurance, servitude. We have to worry about our own happiness because no one has been socially trained to do it for us. To put it in other words: we have to make sure we reserve a room of our own [como escribió Virginia Wolf].

P. The new generations, are they improving the situation?

“There are women who do not feel comfortable at home. They prefer the office: that status exceeds that of wife “

R. In many things yes, in some respects no. The politics of the modern home has become complicated and confusing. There are modern and powerful women who do not feel comfortable in their homes. They prefer to be in the office or wherever they work: their status is higher than as a wife or partner.

P. He quotes Simone de Beauvoir several times. She rebelled against that idea that women should not outshine men in a world where success and power were reserved for them. Now many of them are successful and some men are financially dependent on them.

R. Some men are frustrated that they cannot appropriate the historical privilege of dominance over women. And she gets the message that she must hide her creativity for him to want her. They both know that they lie for him, to save him from the judgment of the rest of the men.

P. “Marriage offers symbolic protection,” he writes his best friend tells him at one point.

R. That is why I describe that neighbor who is ashamed of living alone and transmits part of the blame to any woman who sees that she lives her life on her own, free. We also know that domestic violence exists within marriage. What kind of protection is that?

P. What should be done in the face of the emerging cry of the man who fights back against the liberated feminist woman?

R. It should come as no surprise that men who feel that they own the world do not assume that they are told that it is no longer acceptable. Let them scream and stir. They will be answered and will be studied in the history books. They can no longer count on the silence of women to protect them.

P. Some join his cause.

R. They feel protected by them. What will it be that they fear so much without those men by their side?

P. At the time when she was discovering her freedom without her ex-husband by her side, one night she found herself wearing a satin nightgown, fixing the bathroom pipes with a plunger.

R. Learning plumbing is a great idea. When you unscrew, you try to check what it is that does not allow the water to run, like when you write. Culturally, women are not taught this task. And I do not understand.

P. You reflect on how we obtain our identity.

R. It is something that takes time for everyone. We become what we are through the imitation of the other. First you imitate your mother and father. Then you want to make smoke rings by smoking just like your friend, who in turn imitates that Hollywood actress. All these imitations end up being part of our identity. As we open up to the world, it helps us to meet people other than ourselves. Hear their stories. Argue. Share a glass of wine. And then we start to imitate what we like about them and they do the same with us. Orwell said that colonialists wore a mask and adapted to it. I believe that identity is a mask; we hide behind and think: “I’m like that and I don’t like this.” Identity is not a fixed thing. It is many identities flowing from the great and wide world around us.

P. Why did you raise Things I Don’t Want to Know in response to George Orwell?

R. I read your essay Why I write, 1946, and I wanted to answer him. One of the reasons he cites is political purpose. And I realized that mine was feminism. The world is not built in a favorable way for us.

P. When you have heard, as you did as a child, call someone “I love”, how do you position yourself before the world?

R. When you have been told that the white man is trustworthy, balanced, and you see him treat people of color in an undermining, disrespectful and cruel way … Even if you are a child, or perhaps because of that, you realize that something is not good. I remember those little hungry blacks looking for food in the garbage and my white companions throwing rocks at them. “Blacks are not to be trusted,” they said, but I always felt it the other way around. The sensation caught me and the world turned around. Who is in power? Who says what is good and what is evil?

P. Has it had any effect on your political ideas?

R. I’ve always wondered how people use power. Do you use it for the good of others? That in this age of deception and fake news someone like Alexandria Ocasio-Cortez has arrived is a relief. It is important that there are people who can speak directly to power. Young women are amazing and will save the world.

P. Nationalisms, where do they lead us?

R. I just spent a season in Paris. On the kindergarten building there was a plaque that read “In memory of the Jewish children who were deported in 1942.” Terrible. Three. Four. Five years. Outside was a poster of Marine Le Pen, her face facing the plaque in memory of the victims of Nazism. The 20th and 21st centuries looking at each other; coexisting. With this overflow of nationalisms, what message do we launch in the bottle? It depends on your last name.