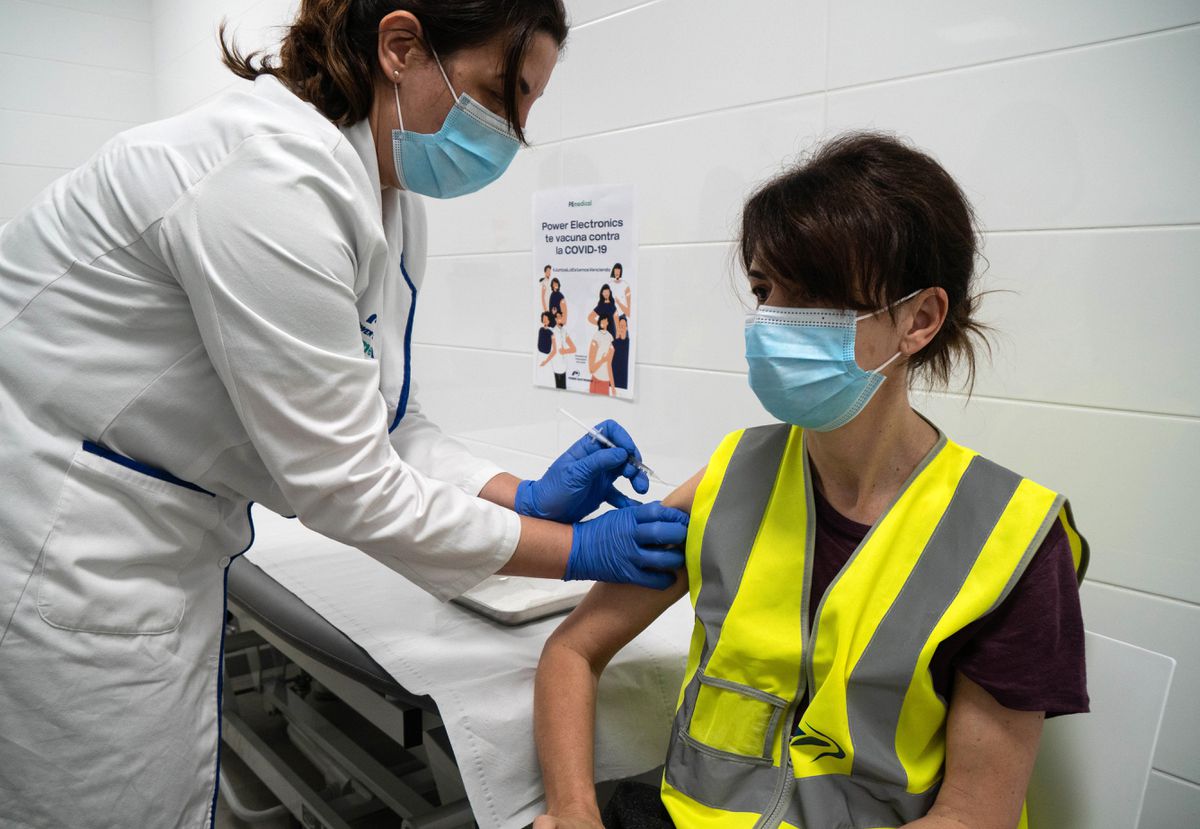 
“It is a luxury to be vaccinated at work. I don’t have to travel and I fully trust my colleagues in the medical service. I can ask you all the doubts. They are new vaccines and you are not sure how your body will react. It reassures me to spend the rest of the working day in my position in the face of possible adverse reactions, because the toilets are on the ground floor ”. So speaks María Muelas, an employee of the Valencian company Power Electronics who, like her colleagues, a total of 2,000 workers, have begun to receive the first dose of the coronavirus vaccine this week in their workplace.

“By accelerating the rate of vaccination we managed to reduce the waiting lists in public hospitals,” says the director of safety and health of this company, Víctor Iranzo. He adds that the Generalitat Valenciana has also authorized them to vaccinate workers from subcontractors such as cleaning, catering or security. “The staff is very encouraged and understands vaccination in the company’s medical service as an added value.”

If the automobile company Seat was the first Spanish company authorized by the Generalitat of Catalonia to vaccinate the workers of its Martorell plant in a kind of pilot project, the Valencian Government has been crowned as the first to allow vaccination in private companies of the 17 autonomous communities. The beneficiaries are 40 companies that will cover 50,000 workers. Something that has been possible thanks to the agreement signed between the Business Confederation of the Valencian Community (CEV), the CEOE Foundation and the Generalitat and that is part of the Sumamos Plan, launched by this foundation.

The protocol, pioneer in Spain, that a company must follow to request vaccination of its workers within its facilities includes different requirements: having a medical center and a team made up of a doctor, two nurses and a nursing assistant for the waiting period of 15 to 20 minutes required after inoculating the dose. In addition, the company must add a figure close to 200 workers in the same age group in which it is vaccinating public health.

Among the Valencian companies that have requested authorization to inoculate the doses to their employees are Arcelor Mittal, Iberdrola, Mercadona, El Corte Inglés, Ford España, Grupo Altadia, Randstad, Urbaser, the public company EMT Valencia or the port center and its companies . “We urgently need people to be vaccinated. Companies have to help because there are sectors that have a serious management conflict for the fact of going to be vaccinated, ”says the president of the Valencian employer, Salvador Navarro.

A vaccination that began last Tuesday for the 50-59 age group and which has just announced its advancement for the 40-49 age bracket. “They are already being called, given the good rhythm of this community,” appreciates Navarro. The speed of understanding between the public-private initiative is “a matter of wills. We have all been aware that negotiating means giving in and making concessions ”. And he adds: “Valencia is tourism, but also industry. Our port is the first in Spain and the fourth in Europe. The exporter needs to go out and sell with his vaccination card, regardless of his age. PCR and quarantines also represent a significant extra cost ”.

A framework in which the Valencia Hospitality Business Federation feels “discriminated against” and speaks of “comparative injury”. Its president, Manuel Espinar, points out that they were “the first to request authorization to vaccinate through mutual insurance companies, and the Generalitat denied it to us without any type of scientific argument.” Something that he denounces as a spokesperson for a “strategic sector, with summer at the gates and with the threat of voracious competition at a time when governments demand safe territories for their citizens to travel.”

Last Thursday also started the occupational vaccination in Andalusia within the Sumamos Plan. The Andalusian Businessmen Confederation (CEA) launched it in collaboration with the National Federation of Self-Employed Workers Associations (ATA) and the territorial organizations of the employers. The Alestis Aerospace company becomes the first Andalusian work center for vaccinations for the 40-year-old age group, with a forecast of 50 patients per hour. The company, in collaboration with the Andalucía Aerospace cluster, will coordinate the vaccination process of the employees of the companies of the Andalusian Aerospace Technology Park, Aerópolis.

For its part, Catalonia has given the green light to the agreement between the Department of Health and mutual insurance companies so that their health personnel collaborate in a vaccination module of the Fira de Barcelona, ​​as explained by the technical secretary of the Health Commission of Promotion of Work, César Sánchez. Also more than 200 companies and mutuals join the Canarian health to advance in vaccination.

In Castilla y León, its Ministry of Health does not rule out “activating the public-private collaboration protocol in the event that more vaccines arrive”. Action that has just been authorized, according to the Confederation of Business Organizations of Castilla y León (Cecale), in the case of companies that maintain business and investments abroad, as requested by the employer. Its general secretary, David Esteban, points out that “it was important to immunize as a priority workers who must leave the country and save their international contracts.”

The corporate vaccine advances unevenly in other autonomies. Galicia offers it voluntarily to companies with more than 500 workers and Aragon has started in the Binéfar slaughterhouses. Castilla-La Mancha will sign its adherence to the Sumamos Plan next week and Madrid does not rule out doing so in the coming days, while the Balearic Islands maintain the ban on vaccinating in work centers.

Complaints from the hoteliers

Hospitality Spain is surprised. “We have not been counted on in the management of vaccines,” says its president, José Luis Yzuel. It was last May when the Ministry of Inclusion, the Association of Mutual Accidents at Work (AMAT) and Fundación CEOE signed the protocol for the mutuals to support the vaccination process. “However, the tourism sector has not been included, nor do they consider us an essential or priority group like the police or teachers.”
Yzuel describes the third national industry as a “very serious affront”, it contributes 6.2% to GDP (prior to the crisis) and currently employs 1.4 million workers who serve a customer “who consumes no mask ”. “Neither the Government nor the autonomous communities have given us the opportunity to have a voice in vaccination plans.” “It is a mistake that, having the mutants prepared, they do not authorize them to be vaccinated because we would have given more confidence and security as a destination in the summer campaign, as Greece has done.”