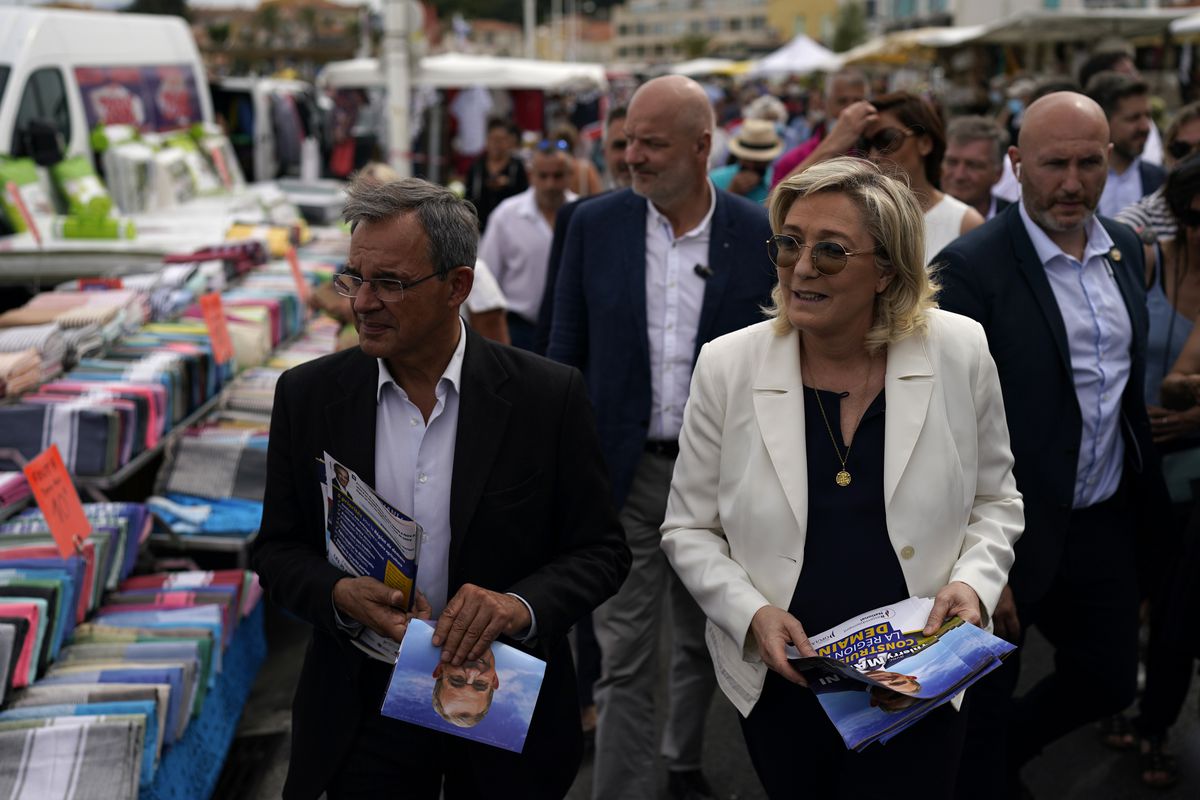 The times when militants on the extreme right felt they were being looked down upon are long gone. Josiane Godani, who campaigned for ultra patriarch Jean-Marie Le Pen decades ago, remembers it well. “We were not welcome,” explains the 72-year-old at the street market in La Valette-du-Var, a town on the outskirts of the port city of Toulon. “Once they lit up some newspaper in the middle of the street and they were about to burn me. Now people are beginning to open their eyes ”.

It was another time. Today the National Front of Jean-Marie Le Pen is called the National Regrouping (RN). Le Pen Sr. has been expelled from the party for years. It is his daughter Marine who has led him for a decade. In the regional elections this Sunday and next, the RN is the favorite to seize power, for the first time, in a region: Provence-Alpes-Côte d’Azur (PACA, by its French acronym).

It is Monday morning in La Valette-du-Var and Thierry Mariani walks through the market, greets supporters, distributes propaganda. Josiane Godani approaches him and says: “I have been in the National Front for 30 years. I hope that this time the French are not fooled ”. Mariani was the Minister of Transport for the conservative President Nicolas Sarkozy. In 2019 he left his longtime party, the traditional right-wing Los Republicanos (LR). He is now the RN’s candidate for the presidency of the Toulon, Nice and Marseille region.

After a rally in the city of Aix-en-Provence, Renaud Muselier, president of PACA, Mariani’s main rival and member of LR, predicted to EL PAÍS: “If they win here, the region will be Mrs. Le Pen’s ladder [hacia el palacio del Elíseo]. As simple as this ”.

Mariani does not arouse passions. He is a 62-year-old professional politician who looks like apparatchik (communist official). At times he seems like a candidate for quiet change and establishment. “About two-thirds of the members on my list are members of the National Regrouping,” Mariani explains over coffee and a cigarette before the walk through the market. “And a third are people of my profile: voters of the classic right who say to themselves: ‘If we want to change things in this country, we must get closer to each other.”

David Rachline, mayor of the nearby town of Fréjus and one of the stars of the RN, accompanies Mariani, describes him like this: “He is someone with experience and, among us, it can be said that he reassures the electorate in a general way.

Reassure: this is Marine Le Pen’s plan for years to come closer to power and break the curse of a party marked by xenophobia, anti-Semitism and her father’s authoritarianism. Jérôme Fourquet, demoscopic guru at the Ifop institute, describes two stages in this process. “First it was de-diabolization: making Marine Le Pen more acceptable and seductive to attract voters,” he explains. This strategy allowed his party, already in 2015, to be the most voted in the first round of the regional elections and, in 2017, to access the second round of the presidential elections and exceed ten million votes. In 2019 he won the Europeans. “Today the strategy is trivialization,” continues Fourquet. That is, to get even those who reject Le Pen to think that it is not so serious if he conquers power. “Above all, it is about avoiding the formation of a republican front against her, not activating the automatic mobilization against her.”

The republican front that Fourquet speaks of is a French form of what has been called a sanitary cordon: the union of the rest of the parties to isolate the extreme right. In the regional elections, it adopts a peculiar form, since the lists that exceed 10% of votes in the first round are classified in the second round. When there are more than two classified, the candidates with less probability are withdrawn and thus the entire vote against the RN is concentrated in a single list. The Republican front worked in the regionals of 2015: the Socialist Party withdrew in the regions where Le Pen could win and Le Pen lost.

Mariani trusts that the sanitary cordon is a thing of the past and gives as an example the re-election of Mayor Rachline in the 2020 municipal elections. “People saw how the National Regrouping managed a city,” she says. “The sun is still shining and the sea has not receded.” The polls indicate that Mariani will be the most voted in the first round in PACA and leaves with an advantage in the second.

A victory in the regionals would allow Le Pen to show that it can win more than a handful of small cities like Perpignan, and show, in the campaign for the presidential elections of 2022, a first balance in a region of five million inhabitants. But the normalization of the RN is not so simple. Mariani is an example. He is one of the greatest supporters of Russian President Vladimir Putin in France, which underlines the closeness of the party to Moscow.

Its campaign director, Philippe Vardon, was a member of the so-called identity right, formed by xenophobic and racist groups that the French government is trying to dissolve. During the campaign for regional and departmental elections, which are held on the same days, the existence of RN candidates with anti-Semitic and racist profiles has been revealed. Some have been expelled, but the cases recall where the party comes from and where part of its base is located.

“What Jean-Marie Le Pen said is happening: that immigration was going to invade us, that there would be insecurity,” says Josiane Godani in La Valette-du-Var after greeting Mariani.

Shortly before, Mariani explained that, although he differed with Le Pen on economic matters, he agreed on the essentials. “For me, the essential thing in a country is the population, civilization, security,” he said. “We can no longer afford to pursue an out-of-control French and European immigration policy. The explosion of violence is linked to this. The quality of life of the French suffers ”.