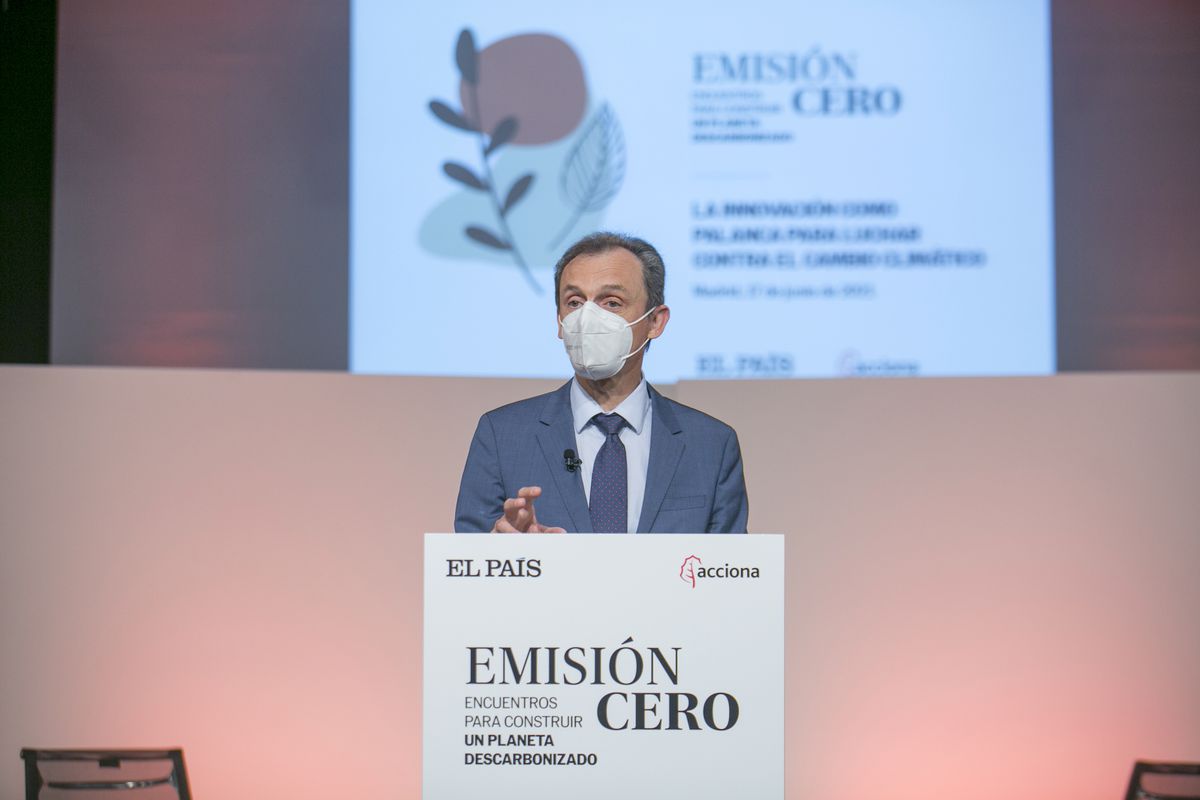 
The fight against climate change is a collective task, in which companies, public authorities, scientists and researchers, and even the most common of citizens, have to pitch in. And it is also a global challenge: it will be useless for the most developed Western countries to drastically reduce their emissions if they do not take into account the situation in less developed economies, with very different energy needs.

From that point of view, climate change and the covid-19 pandemic are similar, and there are more parallels. Some of them became clear from the first intervention – a brief speech by the Minister of Science and Innovation, Pedro Duque – in the conference Zero Emission: innovation as a lever to fight against climate change, organized by EL PAÍS in collaboration with Acciona and held last Thursday: “Climate change is an existential threat, perhaps the greatest of our era, but the experience of the pandemic makes us optimistic about the possibility of facing the crisis with changes in our behavior and, above all, with innovation ”, assured Duque.

The minister highlighted the need to combine short-term actions to combat climate change with strategies that go even beyond 2050, which entails the management of incipient technologies and others that are already mature. One of them, Artificial Intelligence (AI), has played a key role “in the greatest scientific advance of 2020, even above vaccines: the discovery of the structure of proteins, which is going to revolutionize biomedicine,” he said. , already in the debate, Eduardo Sáenz de Cabezón, mathematician, scientific disseminator, professor at the University of La Rioja and presenter of the TVE program Orbita Laika. But the application of AI also supposes improvements that are less spectacular, and incorporated into the day to day. For example, if we talk about renewables, it allows predictive maintenance of wind turbines, as highlighted by Raúl Rivero, Acciona’s chief investment officer (CIO).

Now, with the lessons learned from the pandemic, the political momentum of the European Union and its New Green Deal, and money from the European Recovery Fund, it is time to deepen the use of these new technologies to fight change. climate. Duque highlighted two specific areas of great potential to be developed: large-scale energy storage, and further optimization of marine energy. “In the context of the Recovery Plan, we have a great opportunity to generate our own technology, with a driving and central role for public initiative and working closely with companies and universities,” said the Minister of Science. Regulations will also play a role: “Companies tend to maximize profits, and it is logical, but in the EU we work to make it profitable to produce energy without damaging the balance of the planet. We have to advance regulations that corner those who hinder the fight against climate change ”.

The need for greater collaboration between academic researchers and the corporate world has been a recurring argument for years when analyzing innovation in Spain, but, faced with the temptation of skepticism, Sáenz de Cabezón vindicated the progress made in recent months and was optimistic about the future: “The infrastructures for this fluid collaboration have existed for a long time, what we have to do is use those bridges before there is an emergency. It is precisely what has not happened in areas such as education or teleworking, where it has been necessary to wait for a pandemic to tear down “a wall of excuses”.

In this new stage, “the relationship between companies and the university must be based on trust and even admiration,” said the scientific communicator, and the example of the COVID-19 crisis can also be a mirror in the search of innovative and collaborative solutions against climate change. “In crisis situations like the one we have experienced, the ultimate goal is not to make more money, which will be a consequence, but to improve a situation. In these contexts, we have to bet more on collaboration than on competition ”, said David Cuartielles, co-founder of the open source electronics creation platform Arduino and associate professor and researcher at the University of Malmö (Sweden). In his opinion, knowledge and innovation will flow better if “the container for these exchanges of information and knowledge is an open system, and not the traditional one of patents.”

“Everything that is shared grows much faster,” agreed Rivero, who was also in favor of collaborative schemes. Although the effects of climate change are more subtle than those of the pandemic, Sáenz de Cabezón spoke of the need for “an economy of climate change, just as an economy of health crisis has developed.” And, as with covid-19 and its vaccines, he also stressed the need to combat denialism in some sectors of the population and conspiracy theories in the face of climate change.

Spain is the country in the entire EU with the most overqualified people for their job, according to Eurostat data that Minister Duque himself brought up. To solve this, “we have to undertake several reforms, and some are already underway, such as the enhancement of vocational training, which responds to a labor need of companies.”
In addition to the importance of improving the link between training and the labor market, the head of Science and Innovation appealed to the weight that will have the increase in investment in the energy transition, which will assume 9% of the EU Recovery Plan, “almost 6,500 million in the next three years ”. “There is not much more trick: if we promote science and innovation with more investment, companies and also the public sector will absorb those professionals who are leaving today.” One of the speakers, David Cuartielles, responds, as he himself pointed out, to that profile of a researcher who, after training in Spain, goes to another country (in his case Sweden) to continue investigating.