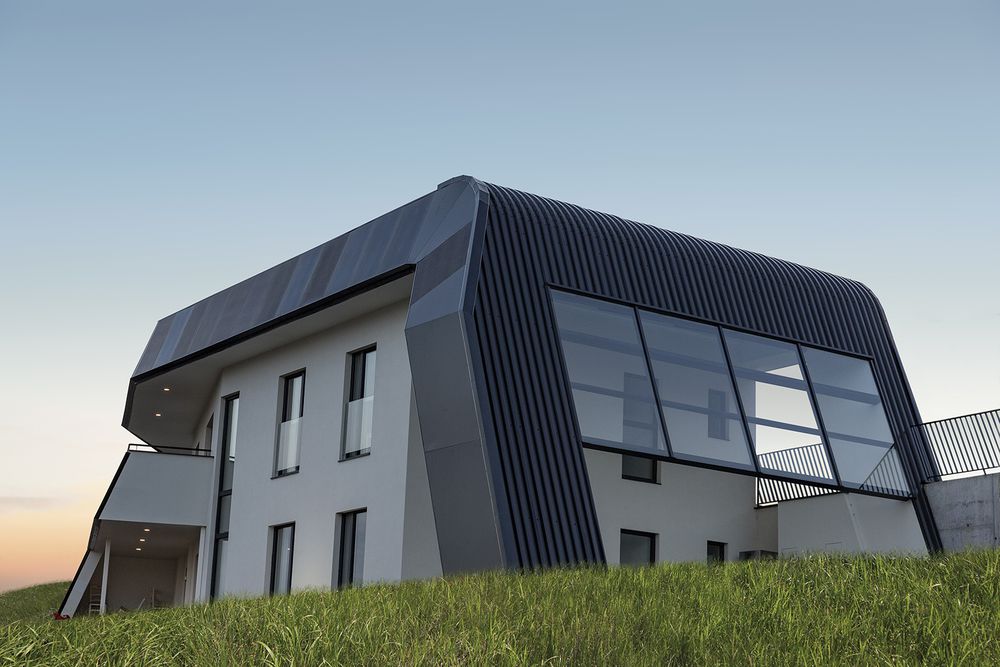 The life of the industrial engineer Omar Suárez (Oviedo, 1973) changed when he found the book at age 12 The solar house on his father’s work table. That work, which embodied the wonderful idea of ​​being able to live in a self-sufficient house through sunlight, has guided the dream of his whole life: to make the houses work only with this type of energy, generating zero emissions. However, Omar, being used to seeing it rain almost daily in his native Asturias, wanted to design a self-sufficient house capable of meeting all his energy needs for heating, air conditioning, hot water and lighting, using very little light, even in the cloudier days, something very common in that area of ​​Spain. And he achieve it.

This curious house inhabited by Omar and his family looks like something out of a movie by Star trek. Its white walls and black facade resemble a spaceship embedded in the grass, since it is located on a plot on the outskirts of Oviedo. Last summer, the house was totally disconnected from the electricity grid and since then it has only used the little light reflected by the clouds in the Asturian sky, in the least sunny and coldest year on record in a long time. But it has been enough: the house has been kept warm and has worked perfectly so far. As the owner says, this success is the greatest proof of the authenticity of the “Solar house that works without sun”.

Despite the fact that there are endless models of solar houses in the world, and several very innovative in Spain, this house is peculiar because it is capable of “operating in a place where in the middle of winter 80% of the sun cannot be seen. days ”, explains its creator on the other side of the phone to Icon Design. Until now, according to Omar Suárez, “most solar houses use photovoltaic panels (which are those that allow the sun’s energy to be transformed into electrical energy), or thermal panels that do not get hot enough and take energy from a network electricity, and they continue to burn fossil fuel (albeit at minimal levels), especially for heating ”.

The key to the innovative operation of this house is in the panels super sensitive that cover the facade of the building and can absorb a large amount of light on days where there is very little radiation. This technology, which gives the building the shape of a spaceship, works as a battery and recharges only with the light emitted by the clouds. In addition, heated floors also behave like solar panels and allow the temperature of the house to be modified by means of tubes filled with water that can be controlled digitally with a mobile device.

“If we put 21-degree water in the pipes, the house gets at that temperature. With other solar home heating systems you need at least 30 degree water to heat the house. However, heating the water to 30 degrees is very difficult on cloudy days, something that fortunately we have already achieved ”, says this engineer. “While the rest of the radiant floors need water below 15 degrees, we just need to introduce it at 20 degrees to cool the whole house.” All this also applies to heating the water in the pool that is outdoors, and that thanks to this system can be used on winter days.

“We have created life 100% disconnected and we want to show that it is possible to live in solar houses with the little light that clouds reflect. It is possible to meet the needs that a whole family or a building may have, both electrical and thermal, without paying a single energy bill with this technology that we have patented throughout Europe: one that can allow us, in a very short time, to decarbonise buildings , which represent between 36% and 40% of the general CO2 emissions in Europe ”, assures Omar Suárez.

It took Omar a year to design and another to build this house, which was the first self-sufficient, CO2-free housing prototype he created with Sunthalpy, a company he founded three years ago in Oviedo. The property has 186 useful meters, four bedrooms, three bathrooms, a spacious living-dining room and a heated outdoor pool.

Now, the Asturian intends to design this type of home from scratch and 100% disconnected from the electrical network (with an architectural design to suit the client, panels of different sizes and colors, etc.). In addition to implementing a new generation of air conditioning systems and solar panels that can be adapted to homes and buildings already built in cities so they emit very little (or no) CO2. The idea is that the cost of these devices can be paid with what one is going to save on electricity and gas bills. However, it is aware that the majority of the population does not have sufficient financial resources to acquire this technology.

Although Sunthalpy received a Neotec from the Spanish Government (the best grant for the consolidation and creation of technology-based companies in Spain), it is not enough to cover all the costs of the company. “We need more companies and individuals with economic possibilities to support this technology so that costs lower and it can be taken to the whole world. We should all do more to take care of the planet, consume less energy and stop CO2 emissions. We must leave a better place for the next generations ”, he says.

“We are not against thermoelectric plants either, we can coexist with them and have them generate energy in a way that does not emit CO2. The great challenge humanity has is to learn to live on earth with a level of comfort in balance with the environment And, obviously, via the fossil fuel economy it is unfeasible. Everyone talks about the advances that will come in 2030 or 2050, however, we have already created this technology today, a 100% Spanish technology ”, concludes Omar.

The first solar house in the world was built in 1948 by the scientist Mária Telkes (Budapest, 1900) with the renowned architect Eleanor Raymond (Cambridge, 1887), in the town of Dover, Massachusetts. The shortage that the country experienced after the Great Recession that came after World War II led them to seek solutions for those people who could not afford the fossil fuels necessary to heat their homes. This is how they created this two-bedroom property with windows that concealed the glass and metal solar panels.

The Dover house had walls that held containers of Glauber’s salt, a chemical used as a pharmacy laxative and as a heat-grabbing substance in development and photography. This technology has nothing to do with the current technology that converts solar energy into electricity, however, this model has marked the starting route and has inspired the construction of the thousands of solar houses that exist throughout the years. the world, including that of Omar Suárez.