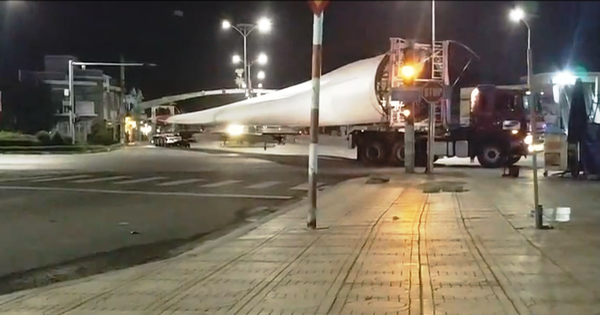 One of the three vehicles carrying super-long, super-weight goods is a wind-power propeller nearly 70m long, with a total weight of 50 tons each, “ran away”, not allowed to cross Cam Hai bridge and many roads in Cam Lam district. (Khanh Hoa) late at night from April 13 to April 14 – Photos provided by residents

Many people witnessed to have taken pictures, provided videos for recording Youth Online for the heavy cargo vehicles that people called for risking their lives on the roads in the north of the Cam Ranh peninsula and the Cam Hai bridge and other provinces, national highway 1 in Cam Lam district, late at night from 13 to 14 April.

Chairman of the People’s Committee of Cam Lam district Nguyen Huu Hao said that according to the results of the vehicle weight of the force under the Department of Transport of Khanh Hoa province, each vehicle carrying super-long and super-weight goods across the Cam Hai bridge has a total weight of up to 50 tons. .

Meanwhile, Cam Hai bridge, which was built previously to serve the transportation of sand in the northern Cam Ranh peninsula of a business, has only a tonnage of about 20 tons.

“It was all running, unlicensed and it was a violation of transportation regulations”, Mr. Dan also said the equipment was shipped “The above-mentioned “lump” is 3 propellers of a wind power post, with a length of nearly 70m. That is a part of the wind power equipment lot of a company imported from abroad to Cam Ranh international port for installation. one project in Ninh Thuan province.

According to the reporter’s source Youth Online, the above batch of wind power equipment there are 7 wind power poles (each pole 130m long, including 5 segments), 21 propellers (each blade is nearly 70m long, weighs about 21 tons), 7 transformers weighing about 95 tons / machine and motors weighing about 20 tons / machine. the. Thus, in addition to 3 propellers already shipped “Leaked out above, still a lot of similar equipment has not been shipped.

Mr. Dan said on the afternoon of April 13, Cam Ranh international port and an enterprise (in Ho Chi Minh City) received to transport the above batch of wind power equipment into Ninh Thuan, contacted the Department of Transport of Khanh Hoa province for permission to save via locally managed roads and bridges (national highways are under the jurisdiction of the Department of Road Management – Ministry of Transport).

But “because the documents they submitted are just photocopies, the plan is too sketchy, so the Department of Transport has not accepted. I asked them to hire a consultant to set up and evaluate the plan to transport the whole batch of wind power equipment. If ensuring safety for all stages when transported on road, across bridges … in accordance with the law, the Department of Transport will consider and license “, Mr. Dan said.

However, at the night of April 13 and the morning of April 14, 3 vehicles transporting “out” of the wind power propellers still made a smooth journey as reflected by the people.

One of the three unlicensed, super-heavy cargo vehicles in Cam Lam district, Khanh Hoa from late at night 13 to dawn April 14 – Video provided by residents