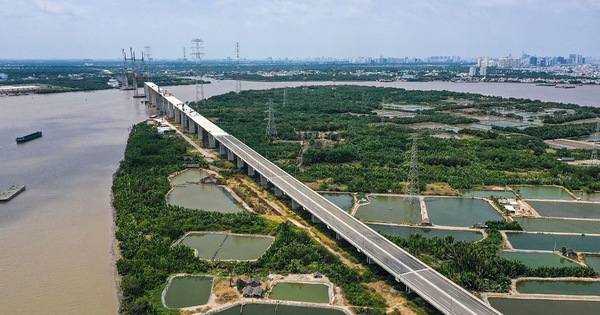 Previously, the Tuoi Tre reporter asked about the expectations for the new term, most of the National Assembly delegates were interested in traffic, especially traffic in the Mekong Delta.

* The Minister said the plan to develop transport infrastructure in the South in general and the Mekong Delta in particular in the coming time?

– The plan is very big but still has many unknowns because it also concerns the ministries, the Government, the National Assembly, I just mentioned what is within reach.

For the Mekong Delta, if within reach, only the main route from Ho Chi Minh City to Can Tho is expected to complete the Trung Luong – My Thuan section this year. This section is currently on plastic carpet, capital investors have fully arranged.

My Thuan 2 bridge located on the expressway has been started, the progress is relatively guaranteed, according to the plan to 2023, the bridge will be completed. My Thuan 2 Bridge is currently arranged by the National Assembly with a construction capital of 5,000 billion VND.

The third section is the section from My Thuan – Can Tho bridge, with a total budget of 4,800 billion VND, currently 3 construction and installation packages have been started, money is within reach. From now until 2022, we will finish the expressway from My Thuan to Can Tho. In short, from here to 2023, Ho Chi Minh City – Can Tho expressway will be completed, this is for sure.

The transport infrastructure development plans are studied a lot, the Prime Minister also stated, but still “unknown” until October this year, when the second session of the 16th National Assembly passed the list I just provided. OK.

* One of the important traffic routes in the southern region, Ben Luc – Long Thanh, is still having problems. How much is the progress of the problems?

This, the Government has discussed many times, during this term, it must be completely resolved. The specific time must wait for the Standing Government to decide.

* What are the difficulties in the development of transport infrastructure in the South? Sir?

– The Southeast is one of the largest economic centers in the country, and has developed relatively well for a long time. However, in the past 1-2 years, the progress has slowed down, the main cause of the development in this area is the transport infrastructure.

Therefore, this area needs to focus resources to complete major projects, in which the Ring Road 3 project is of special interest to the Government. I hope that in this term, to promulgate a mechanism and capital resources, try to complete the ring road project as quickly as possible 3.

As for Ring Road 4, some very important sections such as the section passing Long An connecting with Ho Chi Minh City – Can Tho Expressway – Hiep Phuoc Port, Long An International Port … so these sections need to be invested. .

In addition, focusing on Ho Chi Minh City has a number of important highways, especially the expressway has not been formed, such as connecting Tay Ninh to Cambodia, parallel highway 22 from Ho Chi Minh City to Moc Bai.

These are very important radial highways connecting to the two ring roads 3 and 4. Currently, the Government is concentrating on finding resources and finding solutions to be completed soon.

When these routes are completed, the region’s inter-regional traffic will be improved and the growth conditions of Ho Chi Minh City and surrounding provinces will be better.

* In your opinion, what are the congestion points in the Mekong Delta’s traffic?

– The Mekong Delta currently has congestion, of which the biggest one is the absence of a deep-water port. Therefore, goods from all 13 provinces, especially the 7 western provinces of the Hau River are transported to Ho Chi Minh City very far, with huge transportation costs.

The government will adjust the plan to facilitate resource attraction, forming a deep-water port in the region, now oriented to form at Tran De port (Soc Trang).

When there is this port, a new expressway connecting Tran De port with the center of the region will arise – Can Tho city and An Giang city, and further go through Cambodia. At the same time, one more expressway is needed from Can Tho to Ca Mau.

These are the highways that are essential for the region to promote shipping, connecting air and maritime shipping. The government is very focused, depending on the conditions, that it will try to invest in these important projects as quickly as possible.

In addition, it is also necessary to study the railway, if the HCM City – Can Tho railway is invested, it will definitely reduce transportation costs and reduce vehicle traffic on the national highway because the current demand for people from the provinces. The Southeast and Ho Chi Minh City go to the Mekong Delta provinces and vice versa.