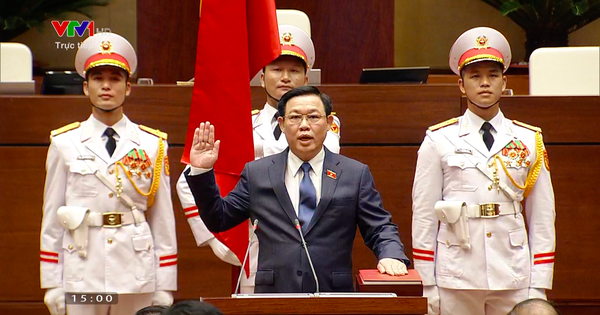 President of the 15th National Assembly Vuong Dinh Hue was sworn in on the afternoon of July 20 – Photo: VTV

In the presence of the National Assembly, standing in front of the national flag, with his left hand placed on the Constitution, his right hand raised, National Assembly Chairman Vuong Dinh Hue swore:

“In front of the sacred red flag with yellow star of the Fatherland, the National Assembly, and the electors of the whole country, I – the President of the National Assembly of the Socialist Republic of Vietnam take an oath: I am absolutely loyal to the Fatherland, the people and the people. Constitution of the Socialist Republic of Vietnam. I vow to practice and strive to fulfill the tasks assigned by the Party, State and People.”

Focus on supervising law enforcement and supervising the implementation of post-monitoring recommendations, in association with the accountability of relevant organizations and individuals, especially the responsibility of the head. Strengthen supervision supervise the handling of petitions, letters, complaints and denunciations of citizens and petitions of voters.

On the basis of profound understanding and timely institutionalization of the Resolution of the 13th National Party Congress, Mr. Hue said that the new National Assembly will constantly improve the quality of legislative work and discipline. legislative process.

Building a synchronous, unified, stable and feasible legal system, ensuring the constitutionality and legitimacy of the legal system and in accordance with international treaties. to create a full legal corridor to create sustainable development of the country.

In which, people and businesses are the center. Continue to build and perfect the socialist rule of law state of the people, by the people, for the people.

At the same time, renovate the organization and operation of the state apparatus in the direction of streamlined, effective and efficient operation. Promote decentralization and decentralization reasonably and effectively along with strengthening inspection, supervision and strict control of power.

To comprehensively and synchronously improve the country’s development institutions, especially the socialist-oriented market economy, to create a favorable, healthy and equal investment and business environment for all sectors. economy.

Well organized get votes and vote of confidence

The National Assembly Chairman also affirmed that he will continue to improve and organize well the polling and voting of confidence.

At the same time, study to continue to improve the mechanism of supervision and vote of confidence for those elected or approved by the National Assembly and People’s Council in accordance with the Resolution of the 13th National Party Congress.

Constantly innovating the mode of operation and improving the quality of decision-making on important national issues regarding the organizational apparatus and high-level personnel of the state; objectives, targets, policies and basic tasks for socio-economic development, investment policy in national target programs and important national projects.

Promote digital transformation in the organization and operation of the National Assembly. Continue to innovate and improve the quality and effectiveness of consulting, assisting and serving activities of the National Assembly; directing, guiding and supervising activities of the People’s Council; renew and strengthen voter contact, consultation, listening to opinions, and close association with voters.