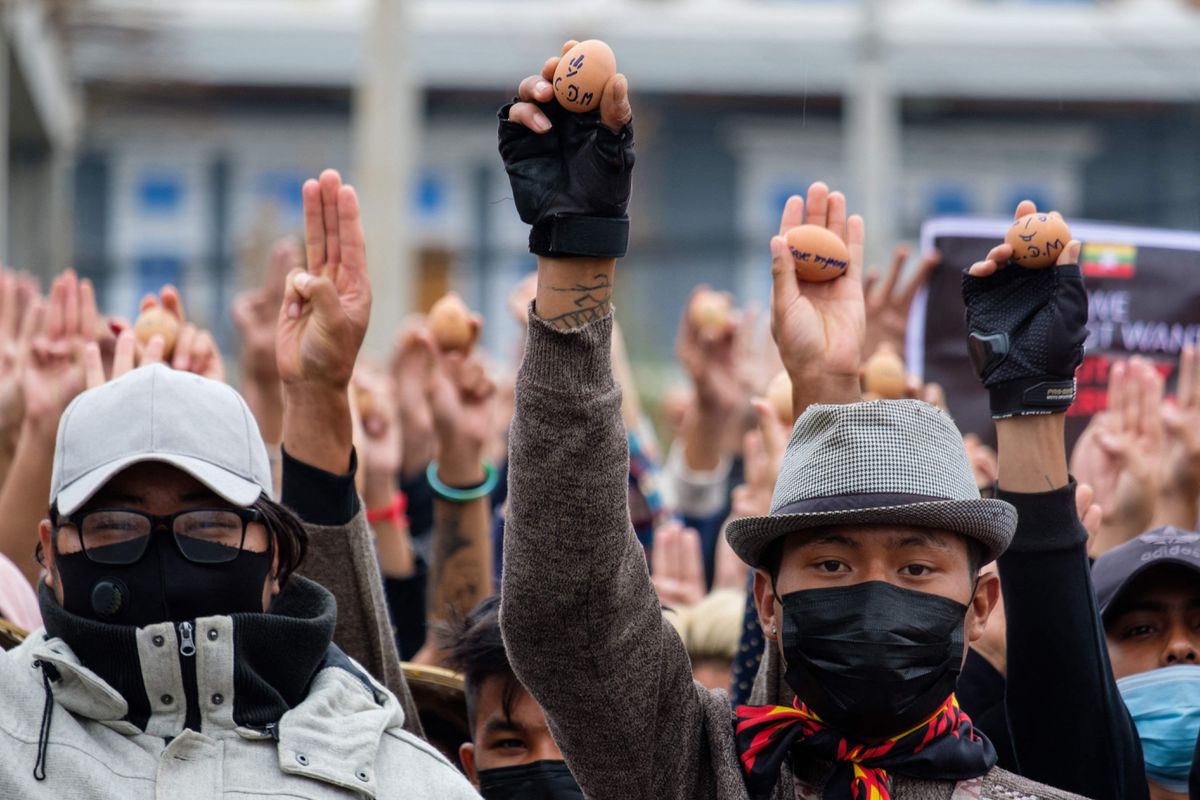 The influencer Win Min Than was hiding with her mother in a hotel in the Burmese city of Taunggyi (capital of the eastern Shan State) when a security force patrol surprised them on Tuesday night. “They arrested her at around eight in the afternoon (local time) and took her alone to Yangon (the commercial capital of Myanmar, formerly Burma),” says her friend Hla Myat Tun in a message from that town. The young woman’s name is on a list that includes a hundred artists from various disciplines and bloggers who are accused by the Myanmar military coup junta of “undermining the stability” of the country for their support of the demonstrations against the coup of the past February 1.

Win Min Than herself, interviewed by EL PAÍS when the first protests took shape in Myanmar two months ago, then made her commitment clear. “I want to show my love for the country, not to defend any party, but to peacefully express our rejection of the dictatorship,” he asserted. The woman had decided to make a radical change to her Facebook profile where, with half a million followers, she was dedicated before the coup to offering fashion advice, and to use it after the coup to inform about the situation and encourage her contacts to join the demonstrations against the military. “They have weapons, we don’t,” lamented the activist.

Since the coup began, at least 570 civilians, including nearly 50 children and adolescents, have been killed in repression by Burmese security forces, according to the Association for Assistance to Political Prisoners (AAPP). The group assures that 2,728 people have also been arrested, including the leader of the civilian government deposed by the generals, Aung San Suu Kyi. The families of those arrested have reported in some cases that they do not know where the detainees are. The blogger’s mother was released, but she does not know where Win Min Than is, according to Hla Myat Tun.

The military junta, headed by the commander-in-chief of the military, Min Aung Hlaing, has used old strategies to go after its opponents. Resembling a witch hunt, in recent days he has published in official media as The Global New Light of Myanmar and the Myawaddy television network lists the names of the actors, writers, bloggers, and journalists identified for alleged disloyalty to the military regime. He accuses them of violating clause 505 of the penal code for “spreading news that may undermine the stability of the State,” which carries penalties of up to three years in prison.

Win Min Than’s family has not yet received word about the charges against her, but her friend Hla Myat Tun suspects that she will be charged with the crime. The same fate is expected to be met by the country’s most famous comedian, Zarganar – as Maung Thura is known artistically – also arrested at his home in Yangon on Tuesday. The comedian is an old adversary of the uniformed men: the man in his sixties already supported movements against the old Military Junta (1962-2011) in 1988, for which he has spent time in prison.

The Police and the Army, meanwhile, continue with the arrests of civilians who participate in the protests and making the connection with the outside more and more complicated; The military regime gave the order to cut off access to the internet with mobile phones and via Wi-Fi to telecommunications companies, leaving only the few connections through fiber optics as an option. “I can only connect to the internet at my mother’s house,” says Hla Myat Tun from that house. The young man, in his twenties, regrets that the violent response of the armed forces has caused mass protests to lose steam in recent days. “I’m waiting to see what plans are next to get back on track,” he anticipates, as the protest and civil disobedience movement continues, although with more symbolic strategies.

On Sunday, protesters painted the emblematic Easter eggs of Holy Week with messages against the Junta, on Monday they sprayed the streets of Yangon with red spray to commemorate the bloodbath perpetrated by the security forces. However, in remote areas the violence is still very much alive: local media report that at least eight protesters have been killed and 20 injured in protests this Wednesday in Kalay, in the northwestern region of Sagaing.

In turn, the legal team of the so-called civilian government of Myanmar (the Committee for the Representation of the Parliamentary Union (CRPH)), which presents itself as the legitimate voice of the country and works underground against the coup plotters, increases its diplomatic offensive. Made up of members of Suu Kyi’s National League for Democracy (NLD) – the winning party of the November elections, declared fraudulent by the generals, their pretext for carrying out the coup – this Wednesday it is holding a meeting with UN investigators to present 180,000 proofs of the abuses committed by the Army since the coup, according to the Efe agency.

The legal representatives of the CRPH – from the Volterra Fietta law firm, led by the Spanish Álvaro Nistal – will meet with those responsible for the Independent Investigation Mechanism for Burma (IIMM) to discuss the “atrocities committed by the military” after the coup. , said in a statement Dr. Sasa, appointed Burma’s special envoy to the UN by the self-declared civilian government.