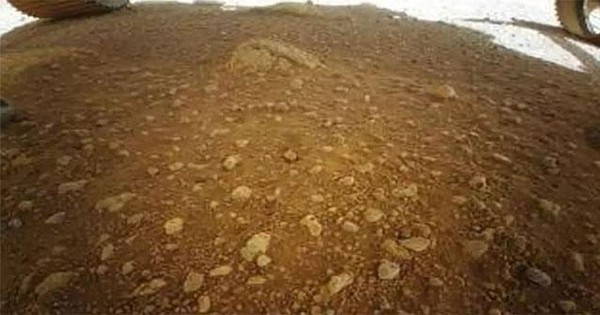 The 1.8-kg Ingenuity helicopter took the first color photo on April 3, not long after it dropped to the surface of the red planet from the belly of the self-propelled robot Perseverance.

The 1.8-kg Ingenuity helicopter took the first color photo on April 3, shortly after lowering to the surface of the red planet from the abdomen of Perseverance self-propelled robot.

In the photo, we can clearly see the Jezero crater base and a two-wheeled part of the Perseverance robot. The photo was shared by NASA on April 5. The Perseverance robot is as big as a car parked inside the 45km-wide Jezero crater on February 18 with an Ingenuity helicopter attached to its abdomen. The robot dropped the helicopter on April 3 and moved a short distance away so that sunlight could reach the helicopter model.

Over the next few days, Perseverance will continue to move further, to locations named Van Zyl Overlook, allowing a good view of the flight area selected by the members in charge of the mission for Ingenuity. If all goes according to plan, Ingenuity will take off as early as April 11, making the first flight in the sky over another planet.

The goal of the experiment was to prove this kind of exploration possible on Mars. If the helicopter performs well with five flights a month, future Mars missions could include helicopters, which help with autonomous robot exploration. Ingenuity does not carry any scientific equipment. But the small flying device will take pictures during flight with a higher definition than the photograph taken from below the Perseverance robot, according to NASA.

The six-wheeled self-propelled robot will try to capture Ingenuity’s flight program from Van Zyl Overlook, using the MastCam-Z high-resolution camera system. Perseverance can also record flights using two built-in microphones. But this is not certain because the sound turns off very quickly in Mars’ thin atmosphere.

Ingenuity’s flight program is limited to one month because Perseverance has a mission to do. The $ 2.7 billion self-propelled robot will look for signs of ancient life at the bottom of the Jezero Crater, which used to be in the deltas of rivers and large lakes billions of years ago. Perseverance will collect and store dozens of specimens to return to Earth during a collaboration between NASA and the European Space Agency, which takes place as early as 2021.

Perseverance probe captures a “rainbow on Mars” image of a $ 85 million helicopter landing on the surface of Mars. NASA robot fires a series of lasers at the Martian rock.

How long does it take to walk around the moon?

Displaying mummies for 3,000 years, sparking fear of unleashing the curse of the Pharaohs