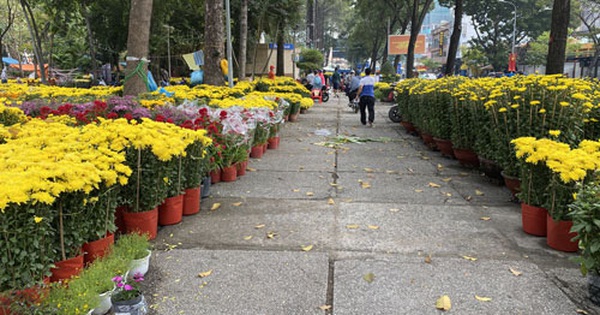 
Although it was not a translation of the locality, the flower growers and Tet flower business in the South were anxious and fidgety because everything was completely turned upside down.

According to statistics from the Department of Agriculture and Rural Development of Lam Dong province, due to the impact of the disease over the past year, gardeners in Lam Dong have actively reduced the area of ​​Tet flowers by about 20% (more than 1,000 ha) compared to with last year. Instead of focusing on the quantity, this season, flower growers have created many new types of flowers with a variety of color and magnitude, adjusting (controlling) the blooming time on the occasion of Tet with the desire to consume well. . However, the Covid-19 translation unexpectedly complicated changes, partly because the influx of cheap Chinese flowers caused flower growers to falter.

Mr. Le Nguyen Lam (50 years old, living in Dinh An village, Hiep An commune, Duc Trong district), said many gardeners in the district are sitting on fire because they have not seen traders come to collect goods. “My family has nearly 10 thousand gladiolus branches, which have signed contracts with traders for 20,000 VND / bundle of 10 branches, but so far they have not come to get them. These days, I have to sell and sell to retailers in the area. Lam Dong province to salvage wages and seeds “- Mr. Lam bored.

Mr. Phan Thanh Sang, Chairman of Dalat Flower Association (Lam Dong), said that the risk of Tet flower growers in Da Lat and Lam Dong this year is very high loss although the association sent a request letter. Provinces and cities in the country support Da Lat flowers, at the same time try to introduce prestigious and cheap garage to help flower growers … but so far, the situation has not improved much.

Similarly, in Sa Dec flower village (Sa Dec city, Dong Thap province), the flower capital of the Mekong Delta, the planting area and the number of Tet flowers this year, although decreasing a lot compared to the previous year, the consumption situation is not. as desired.

According to reporters, if about 2 weeks ago, traders from many places came to Sa Dec flower village to order to buy raspberry chrysanthemum, Taiwanese chrysanthemum, persimmon, sand wall … in recent days, They disappeared, forcing farmers to struggle to find a way out. Mr. Tran Van Tiep, Chairman of the Association I Love Purple (Sa Dec City, Dong Thap Province), said: “Due to the influence of Covid-19, the dealers who bought raspberry chrysanthemum came to order later than last year. Other types of flowers have more than 30% remaining, but no one has come to buy them. Despite implementing many measures to stimulate demand, farmers still have difficulty in selling Tet flowers.

The New Year’s Flower Market in the Park September 23 is empty on February 5 Photo: NGUYEN HAI

Mr. Truong Ngoc Tan (living in Tan Khanh commune, Sa Dec city) said that the prices of flowers and ornamental Chinese New Year such as: sand, almond, marigold, rose … have decreased by more than 30% compared to the previous year, but a few days. Nowadays, most of traders from the Northern, Central and Southeast provinces have dropped their stakes because the goods transported to the North are having difficulty due to epidemic outbreaks in many localities, the purchasing power has decreased sharply. “Many traders are willing to drop a deposit of 10 – 15 million dong, but receive the goods with even heavier losses. Some clues have paid the goods but then brought them back or asked farmers for help because they could not bring them to the North. “- Mr. Tan said sadly.

Mr. Doan Huu Bon, Vice Chairman of Pho Tho Flower Village – Ba Bo (Binh Thuy District, Can Tho City), also said that 2 gardeners in the flower village had just been injured by traders and did not take the goods. Meanwhile, gardeners have brought flowers and ornamental flowers to the flower market for sale, but they are quite humid, although the price is equal to every year, such as: Taiwan chrysanthemum costs 220,000 VND / pair, raspberry chrysanthemum 350,000 VND / pair, Marigold high price 300,000 VND / pair …

In Phu Yen province, farmers grow a variety of flowers such as apricot, chrysanthemum, kumquat, and gladiolus to supply to the provincial market and sell to the Northern and Central Highlands provinces. However, due to the outbreak of Covid-19, many localities have paid orders and received no flowers. “I planted nearly 1,000 pots of red chrysanthemum. Customers in Buon Ma Thuot city (Dak Lak) have ordered all of them at the price of 600,000 VND / pot. I thought of holding more than half a billion VND. However, one customer gave up. Deposit, no one came to buy. Now, I have to sell off for 300,000 VND / pot but still very few people buy “- Mr. Tran Cong Duat, a flower farmer in Binh Kien commune, Tuy Hoa city shared.

Any price is also sold

In Ho Chi Minh City, on the morning of February 5, ie December 24, New Year flowers and decorations from many provinces and cities gathered all the Spring flower markets such as Le Van Tam Park, September 23 Park (District 1). ; Gia Dinh Park (Go Vap district), Ben Binh Dong area (District 8) and flower markets of each district, district, and Thu Duc city. However, according to the reporter, both the number of buyers and sellers are very sparse compared to previous years. The cause was the resurgence of the Covid-19 epidemic, as well as the decline in people’s income after a long year of being affected by the epidemic.

Talking to us, most of the people who brought flowers and ornamental decorations to the city to sell Tet, everyone were anxious and fidgety because the Covid-19 translation had upset all the gardeners’ plans. Mr. Tran Van Minh, a gardener in Cho Lach, Ben Tre, carrying flowers to sell in Ben Binh Dong, said that this year the weather is favorable, the quality of flower pots is satisfactory, even apricot has many buds and is bigger than the year. before but the purchasing power and resale price were not as expected, it seems that this Tet holiday is not happy.

Also in this area, Mr. Hoang Lam brought more than 400 pots of coriander from Ben Tre to sell Tet, including a pot of more than 20 years old, offered only 6 million VND / pot, but when the customer paid 5 million VND he also sold. , also reduced another 200,000 shipping. Mr. Lam said that this year he only dared to put up half of the kinks in the garden for fear of not being able to sell, even though the price decreased sharply.

According to the reporter, along Ben Binh Dong, only about 50 flower boats docked, quite a few compared to the previous years, most of them are apricots and stags. Mr. Phan, also in Ben Tre, brought up here two large bonsai apricot boats, selling at prices ranging from a few hundred thousand VND to a few million VND / pot, down 20% -30% from last year.

At September 23 Park, cherry blossoms overwhelmed, occupying the surface of Le Lai Street. This year peaches are of better quality than last year, but the selling price is also significantly reduced. Small trees range in price from a few hundred thousand to more than 1 million dong, and large trees from a few million to more than ten million dong. Mr. Thai, who sells Thai Binh peaches, said that the sellers did not dare to say as high as in the previous years, but reduced prices by 10% -20% or even 30%. The reason is that many localities in the North encounter epidemics and have difficulty in consuming to sell to the South in order to pay off capital.

At the Gia Dinh Park flower market, Mr. Hien sells geckos and laments that each pot he sells is more than 300,000 VND / pair compared to last year, but still very few buyers. The raspberry chrysanthemum sellers also reduce hundreds of thousands VND to 200,000 – 300,000 VND / pair, 100,000-120,000 VND / pair, but if there are customers who want to reduce more, the gardeners also sell to run epidemic.

Faced with the absence of tourists to buy flowers, the organizers of the travel flower market let customers ride motorbikes inside the park to see and buy flowers instead of having to park their cars outside. This is to attract people to flower markets.

On February 5, the People’s Committee of Duc Trong district, Lam Dong province issued an express document to send agencies, units and businesses in the area on the implementation of solutions to support farmers growing flowers for consumption during Tet. Lunar New Year 2021. Duc Trong District People’s Committee calls on agencies, units, businesses and the entire people to directly come to the flower growers in the area to buy, decorate in the family on Tet, stimulate consumption flowers, supporting flower growers to overcome today’s difficulties.

The People’s Committee of Tuy Hoa City (Phu Yen) has just issued a letter calling on the people of the province to buy Tet flowers to help gardeners grow flowers. Mr. Nguyen Luong Sinh, Vice Chairman of Tuy Hoa City People’s Committee, said Tet is approaching, but households have only sold about 10% of Tet flowers. “Flower growers are all impatient, worried because if they cannot sell Tet flowers this year, they will be empty-handed and in danger of bank debt” – Mr. Sinh said.

The Department of Transport requires the operator of the vehicle to circulate according to the stated itinerary and purpose, not to transport prohibited goods according to the law. At the same time, when circulating into the inner city, they must comply with the permitted content and other regulations of the law on road traffic.

“When in circulation, you must bring this notice and must be subject to the inspection and control of the traffic control forces on the road. In the course of implementation, if any problems arise, promptly report to the Department of Transport. Transport Ho Chi Minh City to be supported, guided the implementation “, the notice stated.