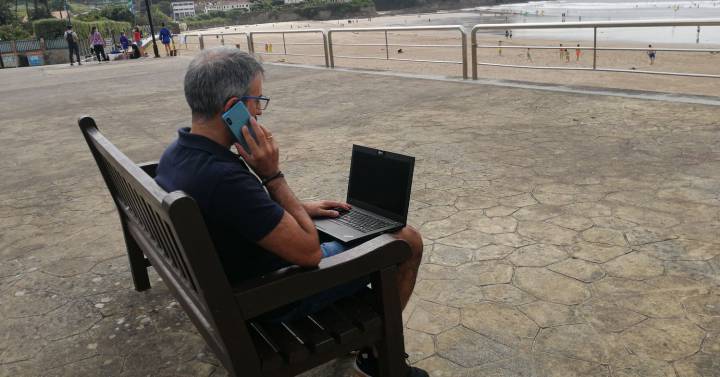 The health crisis due to the coronavirus has driven, it is said that definitely, teleworking in Spain. Many companies have tested the benefits of this service delivery formula for the first time and have decided to extend the model beyond the period of confinement. Teleworkers, for their part, have greater freedom to determine their place of residence. Some have already chosen to move to their second home for a while, in town or on the beach. But be careful, this transfer can be a scare with the Treasury.

And is that staying away from home for months can show that this is no longer the usual home and the Tax Agency could question the application of various tax benefits associated with your purchase. Specifically, among other consequences, the experts warn that the Treasury could reject the deduction of the amounts annually invested in its acquisition.

In the event of a dispute with the treasury, experts warn, everything will depend on the possibility of proving that the property continues to be our vital center.

Can I continue to apply the deduction?

Until 2013, the acquisition of a habitual residence enjoyed an important tax advantage: the possibility of deducting 15% from a part of the amounts contributed per year for the mortgage payment. To have this consideration as usual, the law requires that the buyer have actually occupied the house within a period of twelve months and that he live in it for at least three uninterrupted years.

However, exceptions are also included, admitting absences for very specific reasons “that require a change of address.” Among them, the death of the taxpayer, the celebration of marriage, a separation or divorce, or a change or transfer of employment.

But what happens if you simply choose to temporarily move to a place with fewer incidences of sprouts or that meets better conditions to work remotely? Would the tax benefit be lost?

As Miguel Ángel Galán, Andersen partner, warns, this is not a simple matter and “it is not well resolved by the applicable tax regulations.” As he explains, the law does not regulate what is to be understood by “temporary absence” and when it becomes final. If the taxpayer cannot prove that he spends most of the year in his first home, adds Leandro Sequeiros, partner at Lean Abogados, the transfer will have to be justified. The key, Galán agrees, is in the interpretation made by the administrative bodies of the tagline used by the tax law when listing the causes for which a temporary absence is admitted: “or other justified analogous”. It could be argued, explains Sequeiros, that it was a situation of need such as that, physically, it was not possible to return to the habitual residence.

However, last June, the DGT rejected as a just cause, for example, being trapped in a certain country due to the closing of borders decreed by the pandemic. It was about a newly-married couple living in Lebanon, who were caught by surprise by the confinement while traveling through Spain. The advisory body resolved that this residence time was counted, so if they had spent more than 183 days in Spanish territory they would be considered taxpayers of Spanish personal income tax.

It is true, adds Galán, that the decree of confinement of March forced to remain in the habitual residence, but it would be necessary to review case by case.

The normal thing is that the Tax Agency starts checks if it finds signs that we have abandoned the habitual residence, Sequeiros points out. Usually the alarm can be turned on when the registration is changed or, when crossing data, if another person notifies that they live in that property because, for example, it is for rent. Indeed, Galán agrees, the move can leave “a series of traces”, from registering in the municipality to have access to medical services or discounts per resident (in the Canary Islands) to hiring a post office box for shipments or paying every week with a card at the village hairdresser.

Despite the fact that the Treasury initiates a check, the prosecutor believes, it can always be argued that the transfer has a justification that can be considered “an exceptional circumstance that allows the taxpayer to continue considering their home as their habitual residence.” The Treasury, for its part, can access a multitude of data, such as the average consumption of supplies (water, electricity, gas) in the home during that period. As Sequeiros adds, in addition, in these cases it is the taxpayer who has the duty to dismantle the decision of the Tax Agency with evidence. If, finally, your arguments are not successful, you may lose your right to the deduction for habitual residence and, eventually, you could be sanctioned if there was a violation.

Another possible consequence of the home losing its status as habitual, explains Galán, is the impossibility of applying the so-called exemption for reinvestment. The tax legislation exempts the payment of taxes on the profits derived from the sale of the property if another home is acquired with them within two years. If the house transferred was no longer the place where the taxpayer lived, the Treasury can claim the payment of the corresponding tax.

According to the expert’s understanding, for the taxpayer to regain this right, they should spend at least three years in their home from the time they return to inhabit it before selling it.

Except in the case of the habitual residence, the possession of a property is considered by the tax regulations a demonstration of wealth, and therefore economic benefits are attributed to it (fictitiously).

As the experts explain, the loss of the consideration of habitual residence would also mean that in the personal income tax return a profit for that floor was attributed to the taxpayer: 1% of the cadastral value, Sequeiros points out. This consequence would occur regardless of whether you only have one property, adds Galán. Normally, he explains, second homes have a lower valuation than the main home, so if the AEAT verifies that there is a change of residence, the tax would be increased.

Communication to the Treasury

Finally, Sequeiros points out, “we must not forget that taxpayers are obliged to communicate changes of residence to the Treasury.” Either through the model approved for this purpose, or in the income statement itself. Omitting this information can get us into trouble. This is the case, Sequeiros exemplifies, of AEAT communications that, because they have been sent to the specified address, can be considered valid even if the taxpayer has not found out. “Some client has found that, suddenly, he has a file in the process of urgency or a seizure of the current account for notifications that he has never seen,” he recalls.