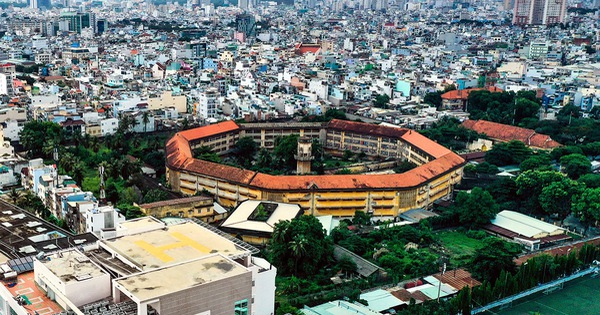 As reported by the Ho Chi Minh City Police, Chi Hoa detention center (No. 324 Hoa Hung Street, Ward 12, District 10), which has been built for a long time, has been severely degraded, no longer ensures safe detention of prisoners and also overloaded.

Relocated because of degradation, Overload

Talking to Tuoi Tre, Major General To An Xo – Chief of the Office of the Ministry of Public Security – said that Chi Hoa detention center was overloaded, so the Ho Chi Minh City police proposed to move and was approved by the Ministry of Public Security. Regarding the function of the headquarters of Chi Hoa detention center after being relocated, Mr. Xo said that he should keep a part to do it Museum.

In Chi Hoa detention center, there are more than 1,000 warehouses to store evidence from before 1975 up to now, Ho Chi Minh City police are asking for land to build new warehouses. At that time, the representative of Ho Chi Minh City Police also said that there was a souvenir area within the Chi Hoa detention center, where there was a place to worship Mr. Nguyen Van Troi. This headquarters is built according to French architecture, if it is kept as a monument, it is very good.

With an area of ​​more than 7ha located in the heart of District 10, Chi Hoa detention center is one of the rare public land in District 10 that lacks many public works. Therefore, many opinions suggest that this land should be reserved for the construction of works serving the people.

Architect Le Van Nam – former chief architect of Ho Chi Minh City – said that the area in District 10 is lacking land for green trees. After relocation, this area should only retain a few structures to save the detention center, the rest of the land should be used as a green park to strengthen green areas for the central districts of Ho Chi Minh City, which are still very less public land and less opportunity to increase green area. “Like Hoa Lo prison in Hanoi is also very famous, currently only retains the gate to save the seal, while the inside has been renovated and built new projects” – Mr. Nam commented.

An expert at the Urban Planning Association of Ho Chi Minh City also suggested that most of this land should be devoted to building public works to serve people such as schools, hospitals, and green parks. According to an official at the Department of Culture and Sports of Ho Chi Minh City, Chi Hoa detention center is one of the addresses on the list of Ho Chi Minh City’s historical and cultural heritage inventory in the 2016-2020 period, the type is historical works. Since its completion, this work has many names such as Chi Hoa examination, Chi Hoa prison, “Bat Gua” prison and the current official name is Chi Hoa detention center.

According to the Heritage Law, works in an inventory of monuments will be treated as relics that have been ranked. Because the work is on the inventory list, the Department of Culture and Sports has repeatedly submitted a request to survey this work but has not yet cooperated.

Many opinions support the keeping of Chi Hoa detention center to become a relic, which marks many struggles of the anti-French and anti-American movements. This is also one of the prisons famous for its unique construction, bearing the Asian concept that people and tourists also want to visit. discover.

According to the Ho Chi Minh City Cultural Journal (volume 3 – Art), Chi Hoa examination, built by the Japanese in 1943, can accommodate from 2,000-7,000 prisoners, living like a great apartment building. .

Some documents show that by 1950, Chi Hoa examination was completed. Starting from there, the French colonialists abandoned Catinat examination. All the prisoners in Catinat and part of the prisoners from Kham Lon were transferred to Chi Hoa. Within the detention center of Chi Hoa, there is still a search of Chi Hoa, the place where Nguyen Van Troi was imprisoned and executed in 1964.