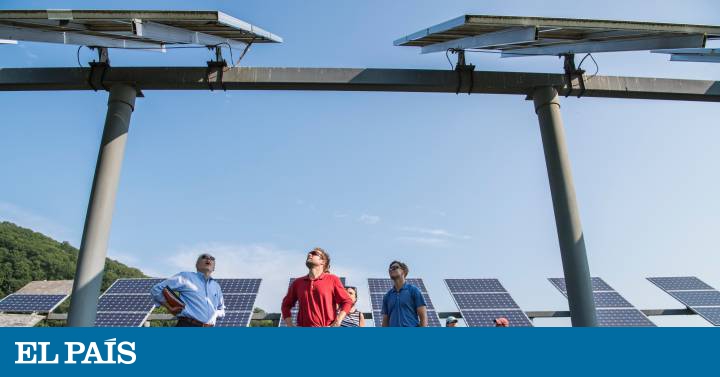 In the area of ​​renewables and sustainable development, there is not one promising future, but many. The UN Sustainable Development Goals (SDGs) and the European Commission’s strategy to achieve a climate-neutral economy by 2050 are some of the actions driven by the urgent need to curb the effects of global warming, and which will be implemented in Spain in a climate change law whose processing is in its final phase. Initiatives that will reduce the carbon footprint and that will have a highly positive impact on the employment footprint, generating job opportunities in numerous productive sectors that range from the generation and installation itself to the development of urban sustainability projects.

According to the new standard, by 2030 Spain will have to reduce greenhouse gas emissions by 23% compared to 1990 levels, while 74% of the electricity produced must come from renewable sources (100% in 2050 ). If transport and industrial processes are included, the final consumption of clean energy will then have to be at least 42%. Some tepid goals for some, but which pose a real challenge: “We have to think that sectors such as transport consume 98% of energy from fossil sources, and therefore we are also talking about electrifying a large part of the park in record time Spanish mobile phone ”, says Nacho Bautista, CEO of Fundeen, a company specialized in crowdfunding of renewable projects.

“The world’s major economies, which represent 70% of world GDP, have already committed to reaching zero net emissions by mid-century. But UN experts warn that, with current policies, the reduction in emissions expected by 2030 is more than 40 points lower than that necessary to achieve emissions neutrality in 2050 ”, warns Javier Azorín, responsible for development, selection and training at Iberdrola Spain. The future, he adds, goes through a combination of mature renewable sources (wind, solar or hydraulic, for example) and the development of new technologies “such as green hydrogen [producido con los excedentes de las renovables], storage and floating offshore wind, which will consolidate this process and allow us to complete decarbonisation in sectors that are still difficult to electrify, such as industry and heavy transport ”.

What are the most demanded profiles?

Engineering is undoubtedly one of the great beneficiaries of the boom in renewable energies, but not the only one, since this sector attracts both professionals from both the university and different higher degrees of Vocational Training. “Mainly industrial engineers from the electrical, mechanical and power electronics branches, civil engineers and female engineers, and even from more specialized training such as Energy Engineering”, explains Rosa Botas, director of personnel at Norvento. In addition, the higher vocational training cycles also provide technical profiles that are and will be interesting within this field, such as those of the Electricity and Electronics, Energy and Maintenance and Installations branch, focused on energy efficiency and energy efficiency. new technologies that make it possible.

For Alberto Garrido, vice-rector for Quality and Efficiency of the Polytechnic University of Madrid, “future professionals need a degree in Engineering or Fundamentals of Architecture and a master’s degree. For regulated professions, an engineer must take a qualifying master’s degree, but can also do a degree that qualifies him for the profession of technical engineer and then a postgraduate degree that allows him to achieve a certain specialization. The combination of digitization and programming knowledge and good soft skills training are also in high demand. Iberdrola, for its part, demands professionals trained not only in Engineering, but also in the commercial area and in the fields of mathematics, computer science and digital solutions, with a high level of languages.

Experts in digital transformation will also have an important gap, such as in the solar energy sector: “One of the negative inputs of the market is usually the customer experience. For this reason, we want to digitize the process, simplifying the switch from fossil fuels to solar energy. And for this, we will need engineers from software and UX designers, as well as machine learning engineers to build the clean energy platforms of tomorrow for homeowners, ”says Wouter Draijer, CEO of SolarMente. “Although there is no demand today, we expect this to increase progressively,” he adds.

In any case, the employment footprint goes beyond these specific profiles: we are talking about an ecosystem based on engineering but that will require professionals from all areas, and that will even promote jobs that do not yet exist, such as those focused on engineering. recycling of renewable facilities. “We cannot forget equipment suppliers and industry, consulting and legal advisory services … At the local level, installation, maintenance and construction companies will find many opportunities and, furthermore, the impact will be especially noticeable in the regions Spanish most affected by depopulation ”, says Bautista. Through its initiatives of crowdfunding, Fundeen has also made possible the participation of small investors (from € 500) in renewable energy projects such as the Partaloa photovoltaic plant, in Almería (1.3 MW), which raised nearly one million euros of investment in just over a month.

For Azorín, Spain has a reference value chain in mature renewable technologies, and has the potential to become the spearhead of other future technologies: “The commitment to innovation will contribute to improving efficiency and productivity. of the existing renewable energies, and a definite boost to the competitiveness of the most incipient ones ”. In this sense, one of the areas that will experience the greatest growth is undoubtedly energy storage, since it allows greater control and availability of these sources, storing energy when more is produced and releasing it when it is less available. “Although the industry has come a long way in this field, partly due to the rise of the electric car and mobile telephony, there is still a great opportunity for improvement in storage on an industrial scale,” says Botas.

Other areas that will acquire relevance in the future with those of smart solutions and microgrids, which are basically “a way to guarantee the renewable electricity supply even where the electricity grid does not reach; they are autonomous systems designed to operate disconnected from the network ”. In Boots’s opinion, this is an area that will experience significant growth in the future and for which “it will surely be difficult to find highly qualified professionals”.

With regard to the automobile fleet, the National Integrated Energy and Climate Plan establishes that new passenger cars and light commercial vehicles, excluding those registered as historical vehicles, not intended for commercial use, gradually reduce their emissions, so that no later than by 2040 are vehicles with emissions of 0g CO2 / km. “Therefore, after this date, vehicles with thermal engines and those with zero emissions will coexist. Spain has to make a significant effort to achieve these goals ”, recalls Garrido.

On the other hand, the experts consulted coincide in highlighting the role that public administrations can have to guarantee the development of renewable energies to their full potential, reducing, for example, the procedures required when installing self-consumption, as happens in Holland: “There you can install without waiting for any permission and easily connect your installation to the network. Subsidies are also awarded on a national scale and do not change according to the different regional or municipal administrations ”, says Draijer. But also “predictable and sufficiently attractive regulatory frameworks to mobilize the large investments needed; a tax system aligned with the “polluter pays” principle; that the allocation of recovery funds is linked to environmental metrics and that innovation and public-private partnerships be fostered ”, affirms Azorín.

Getting cities to grow without renouncing the principles of sustainability, circular economy and energy efficiency is already a reality that is making its way in more and more cities around the world. Projects that turn their backs on current urban planning to give way to more accessible environments that prioritize accessibility and an intelligent use of resources, such as La Pinada, a 24-hectare eco-neighborhood that will accommodate 1,000 new homes in Paterna ( Valencia). Born in 2017, La Pinada is a “collaborative, inclusive, diverse and socially cohesive” co-creation exercise in which 400 future neighbors and more than 20 experts from different areas have already participated, defining together aspects such as the prominence of green spaces, the management of resources or the well-being of its neighbors in more than 30 meetings throughout these years.

“Making an energy sustainable neighborhood is possible through actions in three main areas: reduction of demand and efficiency in consumption (with better insulated buildings and with adequate solar protection, and efficient air conditioning systems), generation in proximity through renewable sources and consumption management, through the accumulation of surpluses that can be used at different times ”, explains Iker Marcaide, industrial engineer who created Zubi Labs and promoter of the project.

Developing a neighborhood like La Pinada also implies the participation of a multidisciplinary team that covers vital dimensions that go from the personal to the work, through the definition of the habitat, education (with a Montessori educational center) or the lifestyle. . Thus, they include computer programmers, for the configuration of the systems smart city or domotics; industrial engineers with extensive knowledge of renewable energy; architects with bioclimatic design capabilities; agricultural, landscape and forestry engineers; civil engineering or materials engineers; and also economists, sociologists, lawyers and even journalists.

“Traditionally, it would have been a project made with architects, but the complex and changing present that we live requires an approach from sociology, biology (providing a scientific vision on physiology and human behavior), physiotherapy (with guidelines on healthy habits that allow the design of open spaces or vital routines), the economy, engineering, education and, of course, architecture ”, explains Marcaide.