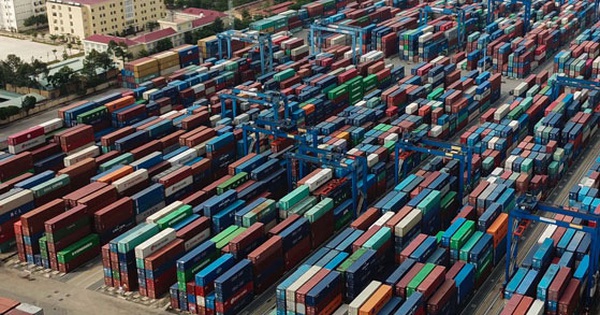 
According to the HCM City Customs Department, the total amount of scrap inventory at ports in the area is more than 2,000 containers, of which nearly 1,100 containers are forced to re-export. It has been more than 30 days since the General Department of Customs requested the handling, only one shipping company is allowed to re-export 39 containers from 2 ports, Cat Lai and ICD.

In a letter applying for re-export of backlogged goods to the customs authority, MSC Company proposed to re-export 22 containers of backlogged goods by means of transfer to another shipping line’s container. This company also has a written commitment to re-export all backlogged consignments identified as hazardous wastes and scraps that do not meet national technical regulations on environment out of the territory of Vietnam. In the same situation, the shipping company Evergreen Vietnam also sent a request to re-export 8 containers of scrap cargo at Cat Lai port to Hong Kong (China) by ship. Similarly, HMM Shipping Vietnam has sent an official letter to re-export 69 containers of scrap from September 8, but has passed the 30-day deadline, the company has to change its re-export plan and continue. wait.

A lot of scrap containers are left in stock at Cat Lai port (HCMC) waiting to be re-exported. Photo: HOANG Trieu

An authorized unit of shipping lines said it is waiting for the opinion of the General Department of Customs to re-export procedures for 500 containers of scrap. “The longer the time to stay at the port, the more damage by the shipping company because the cost of managing and storing the container … is very expensive; on average, it has to pay 1.5 USD / day / container” – this unit informed believe.

Also according to shipping lines, the customs authorities are concerned about the rotation of containers to import scrap that has just been re-exported into Vietnam again, but this case is not feasible. The reason is that customs has a list of containers that are forced to be re-exported; Before the ship arrives at the port, shipping lines have to transmit Manifest – the system to receive the cargo manifest (scrap only has to add E-scrap – the waste tracking management program) to the customs, so it is impossible to have a job. Goods forced to re-export to the port. In addition, shipping lines also do not allow those containers to return to Vietnamese ports because it is not profitable. The case of changing the container to bring this scrap back to Vietnam is also not feasible because the cost of customs clearance and transferring to overseas containers is very high, about 3,000-5,000 USD / container, not including the cost of betting on containers for scrap. material is 5,000 USD / container, so there are almost no shipping lines accepting to transport scrap at this time.

“Residual scrap causes great damage to shipping lines because they have to pay container storage costs, cannot put container shells into operation, port enterprises are occupied. Therefore, shipping lines want the General Department of Hai. The agency soon has a quick and scientific decision so that shipping lines can re-export substandard scrap out of Vietnam “- a recommendation of a shipping company representative.

15 shipping lines have no plan to re-export 615 containers

“All plans as well as recommendations to re-export scrap inventories that shipping lines have reported have been reported to the Customs Management Supervision Department under the Customs Department of Ho Chi Minh City to synthesize the report. Customs Department and waiting for instructions from superior management agencies Saigon Port Region 1 Customs Branch hopes that the General Department of Vietnam Customs will soon provide guidance and guidance to resolve shipping lines. judgment and ask for re-export “- Mr. Long said.