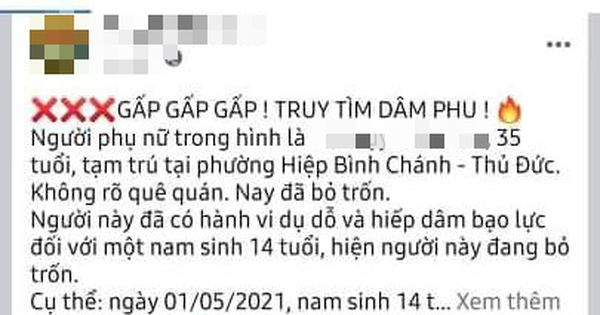 After verified, Hiep Binh Chanh Ward police confirmed There is no case and there is no incident in the area of ​​the ward.

According to the source, Hiep Binh Chanh Ward police have discussed with the cybersecurity forces to verify and examine the above account holder for clarification.

Before that, on the social network Facebook has a personal account name QTTh. Post information with content Find a woman named H., 35 years old, residing in Hiep Binh Chanh ward, Thu Duc city about this person seducing and rape against a woman. 14-year-old male student in his own home and is fleeing.

This account also stated On May 1, H. invited a male student to be named Đ. to a private house. After that, H. had a detention and lewd behavior in the bedroom, causing the victim to bleed in his vagina, exhausted.

In the article stated sAfter the incident, H. took the male student to the hospital and left. When his family reported to the police, H. locked the house and fled to the locality.

According to lawyer Tran Minh Cuong (Ho Chi Minh City Bar Association), the Facebook page’s owner posted the above information with signs of providing, sharing fake information, false information, distorting, slander , offending the reputation, honor and dignity of individuals, in particular those mentioned in the article.

Also according to lawyer Cuong, for individuals who create false information and spread that information on social networks to offend the honor of others, there are signs of slander under the current Criminal Code. onions.

“In this case, people who are posted online images and personal information to defame or tell the wrong facts can report to the police to protect their legitimate rights and interests” – said lawyer Cuong. .