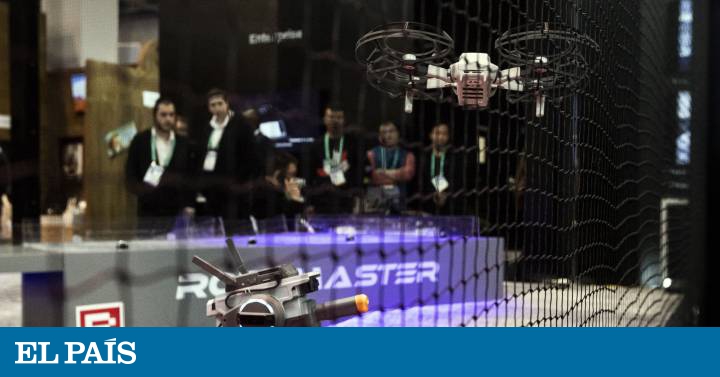 The US government is preparing to cancel its civilian drone program for fear of Chinese espionage. The nearly a thousand Chinese-origin aircraft of the Department of the Interior have been on the ground since November. Now, according to Financial Times, the definitive abolition of the program seems imminent. The end of the service is serious because civil drones are in charge of monitoring emergencies, forests, borders or sensitive areas. Without those drones, many of your jobs would have to return to more expensive and dangerous manned flights.

Chinese devices have no simple alternative: Chinese companies dominate the global market for small drones with a lot of competitive advantage. The decision may become one more episode in the technological battle between China and the United States, where Huawei has been the main victim, linked to the new cold war for 5G, and the app of the moment, TikTok, the most controversial controversy (TikTok It is Chinese and it is in millions of mobiles around the world).

Among all these Spanish institutions, they gather more than one hundred DJI drones

In Europe and Spain, as in the other examples of the technological war with China, the concern is less or hidden. In Spain there are five distributors of DJI drones. EL PAÍS has contacted all of them and at least three have explained their sales and commercial relations with security forces and Spanish organizations: Civil Guard, General Directorate of Traffic, National Police, Tax Agency (for borders) and a multitude of local and regional police . Among all these institutions, they bring together more than one hundred DJI drones, with numerous negotiations underway to continue growing.

Chinese drones have been under suspicion in the US since 2017. The US military then banned the devices from DJI (Da Jiang Innovations), which dominates the global market, for fear of espionage. In August of that year DJI opened a challenge for hackers to find vulnerabilities in their systems and prove that they were trustworthy. One of the hackers, Kevin Finisterre, was able to access their servers and found everything: “Information on passports, driver’s licenses, state cards and flight diaries. Another thing I did to judge the impact of the exhibition was search for domains ‘.mil’, ‘.gov’, ‘gov.au’; immediately flight summaries for a lot of potentially sensitive locations appeared “, explains Finisterre in the report he wrote about all the legal problems he had with DJI over the disclosures.

“That the drones of that Chinese brand may be sending the data, for me there is no doubt because it has already been shown in the past, as Finisterre did”, says Pedro Cabrera, founder of Eton Shield, an ethical telecommunications hacking company . “And not only from Chinese manufacturers. I was able to verify the same with a French brand. I was able to obtain all the information on flights of that brand that had flown over several cities, including Madrid; all contained the basic flight information (time, route , status) and some even contained the photos or videos that the pilot had taken, “he adds.

Silence from the Ministry

The Spanish Interior Ministry, when asked by this newspaper, has declined to comment on whether they are going to take any action against Chinese drones. The Ministry of Defense, on the other hand, has admitted that it does not have any DJI drones and has detailed its guidelines for acquiring small drones: “The Ministry of Defense is aware of the need to have RPAS systems. [vehículo aéreo no tripulado, en sus siglas en inglés] of reduced size that allows to cover the necessity to obtain information of tactical level “.

For this, Defense has created some “General Staff Requirements” and is now preparing “the Stage of Determination of the alternative of obtaining. In this step the concrete material resources to obtain are evaluated and the industrial, technological, logistical, contractual aspects are evaluated. and costs associated with the proposed operational or functional solution. These aspects include the evaluation and certification of security in information technologies and telecommunications (ICT), which allows assessing and accrediting their ability to handle information safely ” .

One proof of the difficulty of replacing these small drones with viable alternatives is that US special forces continue to buy them, despite the veto. Your option is to add software that limits the potential safety hazards of Chinese-sourced drones. “We know that a lot of this information [de los drones] it’s sent to China, so it’s something we can’t use, “a senior Pentagon official told reporters in December.

You don’t have to be a military strategist to understand the value of detailed, chronologically ordered images of sensitive areas in another country, with the option of mapping hypothetical physical and human targets. It is not something that the satellites have resolved at the moment: “The image that can be obtained by satellite has its limitations, and that also assuming that China has a satellite system that allows photos of the United States to be obtained,” explains Cabrera.

“But how many DJI drones are there in the US? Millions. Whether these drones belong to a public department or a citizen, it doesn’t matter, they have the same operating system. We cannot know if the manufacturer treats the drone information differently. depending on the user or if they mark certain drones to be more attentive to their information, but of course it is perfectly feasible “, adds Cabrera. Obtaining useful intelligence from thousands of hours of video is not easy yet, but being able to distinguish drones that shoot in interesting places is valuable.

This Monday, January 13, the US Secretary of State, Mike Pompeo, gave a speech in Silicon Valley on technology and China. He did not refer to drones, but he did refer to how the Trump government sees China: “With [el presidente] Xi Jinping, the Communist Party has prioritized something called a ‘civil-military merger’. It is a technical term but with a very simple idea: under Chinese law, Chinese companies and researchers must – I repeat, must – under penalty, share their technology with the military, “he said.

Da Jiang Innovations (DJI) insistently denies that all this occurs: “We look forward to reviewing the findings of the ‘deep review’ of the Interior Department’s drone program given the lack of credible evidence to support a broad country-of-origin restriction. drone technology. DJI drones remain among the safest and most widely used in the industry, “DJI said in a statement following the news from the FT.

Drones pose a new nuance to the balance between convenience, both economic and technological, and safety. Is it worth considering all the hypothetical risks in exchange for not being able to use the technology more at hand? The US does not need huge drones, manned thousands of miles, costing millions of dollars: with one of those, a Reaper, they killed Iranian General Soleimani. But it does try to promote its own small drone industry. Whether this maneuver is just to improve your business position or a real concern for national security is the big question. Also for other countries.

The United States government is clear on who to press: “You go to Europe and they are very careful when it comes to protecting the private information of their citizens, their medical records, everything that nobody would want in public space, and at the same time they are prepared to allow all of that to circulate through Chinese infrastructure, “Pompeo said. “I remind you – and I know it is an imperfect analogy – none of us would have installed Soviet technology, right?”