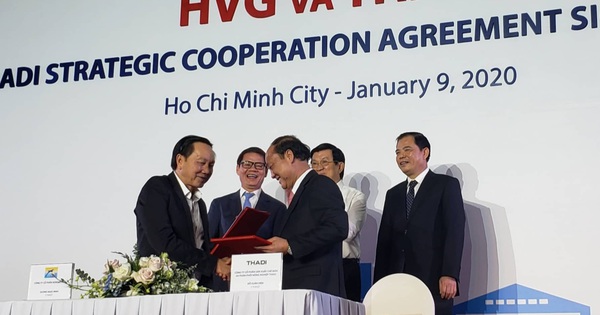 
Truong Hai Auto JSC (THACO) has just announced to sell 56.53 million HVG shares, equivalent to 26.26% of capital in Hung Vuong Joint Stock Company for the purpose of financial restructuring. Implementation time is from 20-11 to 18-12 by agreement method.

At the same time, Mr. Nguyen Phuc Thinh – Member of the Board of Directors of the two companies registered to buy all of the above shares to invest. Based on the current market price of 5,000 dong, the block of shares is worth more than 280 billion dong.

Thadi agrees to invest in HVG with a 35% stake and participates in management, appointing a representative to hold the position of Vice Chairman of the Board of Directors, Chief Financial Officer, technical expert and sales and financial support specialist.

Hung Vuong Joint Stock Company has 15 years of operation in the field of processing and exporting the largest catfish in Vietnam, with a closed value chain from animal feed production to farming, processing and export. HVG also owns the exclusive rights to pig breeds transferred from Denmark and has invested in building high-tech pig hatcheries in An Giang, Binh Dinh. HVG also produces animal feed, provides safe, high quality European technology for breeding pigs and animal feed for the people involved in breeding. However, over the past time, Hung Vuong has encountered certain difficulties. Mr. Duong Ngoc Minh had to narrow down many production lines and sell many subsidiaries but still could not overcome the difficulties.

By the end of March, THACO successfully offered to buy 59,625 million HVG shares through the agreement method, increasing its ownership to 26.26%. In parallel, THACO Chairman – Mr. Tran Ba ​​Duong – also completed buying 11.26 million HVG shares, equivalent to 4.26% of the capital.

In the opposite direction, THADI also completed selling 53.9 million HVG shares by agreement, no longer holding shares in HVG. This move is part of the strategy signed between the two sides previously.

By the beginning of August, HVG shares were officially canceled from the compulsory listing on the Ho Chi Minh City Stock Exchange (HoSE) because of the delay in publishing their financial statements according to regulations, despite being prompted by the HoSE three times.

In the middle of August 2020, Hung Vuong put shares to trade on UpCoM system of Hanoi Stock Exchange (HNX). Since then, HVG shares have had very few transactions. The price per share increased slightly from 4,500 VND to 5,000 VND.