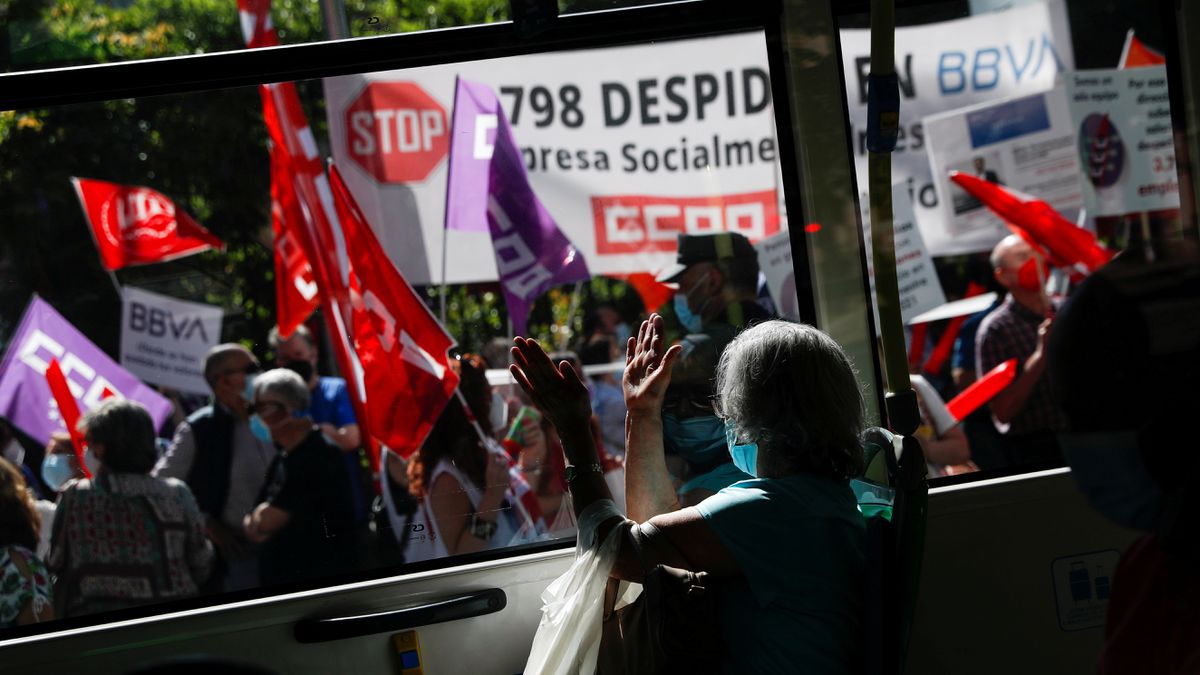 In the midst of the discomfort over the ERE with thousands of dismissals announced by various entities, including BBVA or CaixaBank, and after the controversy that the workforce reductions are being carried out while managers receive high salaries, the bank wants to sign peace with the Government , who reproached the high salaries of the leadership, and has launched a plan to recover part of the lost reputation.

To achieve these objectives, the entities prepare a joint document that, barring surprises, they will present in July and that has been consulted with the Ministry of Economic Affairs led by Nadia Calviño. In this report they want to highlight the positive work they have done for society during the covid crisis and commit to upholding the principles of social responsibility in the next economic recovery, in which they want to be a participant.

According to sources familiar with the conversations, the document will be structured around three prominent axes: one, the salaries of managers, on which they admit that there must be moderation in a time of crisis, but without recognizing that salaries are excessive, especially when compared to their European or Anglo-Saxon peers.

Second, the sector wants to highlight the role of the bank in helping the real economy in this crisis, deploying more than a million operations between refinancing, moratorium on loan payments and financing with endorsement. of the ICO.

The banks want to make clear the commitments they have acquired, such as the relocation of a good part of the dismissed workers, according to sources familiar with the negotiation. They also aim to highlight everything they are doing for the digitization of the economy, the financing of the energy transformation and the coverage of financial services in empty Spain. The sector will also place special emphasis on financial training given to young people in schools and their staff to prevent unsuitable products from being sold to customers.

Thirdly, the bank undertakes to finance the private resources that are mobilized to undertake projects that use European funds, even offering to mediate the distribution and selection of funds among companies.

In summary, the sector wants to compile its positive contributions to society in an unpublished document because it tries to bring together the most representative banks with the seal of the Spanish Banking Association (AEB) and that of the CECA, which groups the entities from savings banks. These two organizations have only issued joint statements in very special circumstances, such as in the pandemic.

The moment does not seem the most opportune, because it comes after the National Commission of Markets and Competition (CNMC) has opened a file to four of the largest (Santander, CaixaBank, Bankia and Sabadell) for taking advantage of the credits granted with ICO endorsement to place clients with insurance and other very profitable own products or to clear up doubtful debts by placing them under the guarantee of the State.

Apart from uncomfortable incidents, the sector wants to build bridges with Vice President Nadia Calviño and cool down a confrontation that has gone very far, according to the bankers consulted. The presentation of the EREs of CaixaBank and BBVA, which may lead to the dismissal of some 9,000 people, occurred in the middle of the electoral campaign of the Community of Madrid, and became a throwing weapon used by Vox and a part of Podemos against him Socialist wing of the Government.

In La Moncloa, it was considered a clumsiness on the part of the entities that presented the ERE at the same time that the new remunerations of the CaixaBank leadership were known, where the State controls 16% due to its previous domain of Bankia. Its president, José Ignacio Goirigolzarri, has gone from earning 500,000 euros to 1.68 million, apart from the bonus for objectives.

This circumstance strained the situation and ended up leading Calviño to adopt a belligerent stance with the banks, which he now wants to redirect. The vice president and the president himself Pedro Sánchez demanded salary moderation from the leaders of the entities, arguing that if the dismissals seek to reduce expenses, they should also reduce the multimillionaire salaries in the middle of the crisis.

Calviño recalled that for years he has been demanding that entities be more imaginative in the search for profitability and that they do not limit themselves to closing offices and firing workers at an age that makes their relocation difficult. The reduction in almost 1,000 dismissals of the BBVA ERE, something that CaixaBank is also doing, although it has not signed the agreement, as well as the improvement of the exit conditions, are aspects that the vice president has publicly valued, implying that they have been due to their political pressure.

Now the first conciliatory reaction of the Government by the mouth of the Minister of Finance and spokesperson, María Jesús Montero, when she defended the adjustments in the merger of CaixaBank and Bankia, is far away. “Being aware that this is a large and important file, this could have been much higher if each entity had carried out the restructuring on their own,” he said.

The bank wants peace with the Executive. And he is in talks with the Ministry of Economic Affairs, which welcomes the proposal. The entities also seek to reinforce Calviño with this initiative against the toughest wings of the coalition government. What’s more, they admit that the economic vice president is the best thing that can happen to them with this Executive.

In short, it would be a kind of truce after the tensions that Calviño already had with the entities on account of the design of the ICO loans, since the banks lobbied La Moncloa demanding higher levels of coverage of public guarantees. And then they also became involved with the Economy because of the cuts to ICOs and direct aid to companies. Several entities even claimed the latter in public, something that did not sit well in the ministry. Everyone, the government and banks, seem to win if the waters are calm again. That is the objective of the document, which is still in the consultative process, it has not reached the consensus of all the actors involved and, in any case, it will include guidelines and not norms.

The entities suffered a significant reputational loss with the last financial crisis. But with the pandemic, their situation in public opinion took a turn and began to improve by facilitating, supported by the ICO, financing to companies that were running out of income due to restrictions on activity. In 2020, its public projection changed, and it went from being a problem to being part of the solution. Until the news about ERE and executive salaries began to emerge. Since then, the sector has observed with concern the deterioration of its public perception. So they have decided to take this step forward with the intention of reinforcing their reputation.