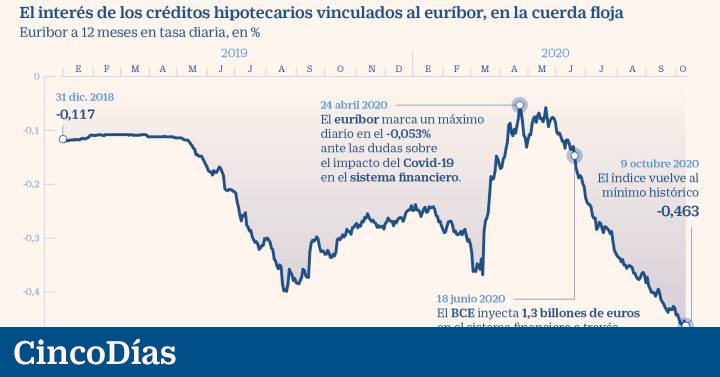 Variable rate mortgages are in negative territory, at least in theory. The 12-month Euribor, to which credits of this type are referenced for some 300,000 million in Spain, repeated on Friday its daily historical minimum at -0.463%, marked on Wednesday. The monthly average so far in October is at -0.456%. Spreads below that percentage show a negative interest rate. But the banks refuse to pay for the mortgages, and mark the floor at 0%.

The dystopia started in February 2016, when the 12-month Euribor turned red for the first time. But the banks, in most cases, had not suffered the problem of having mortgages with theoretically negative interest rates on their balance sheets. The spreads covered the percentage remaining in the Euribor, except for some exceptions for loans granted in the Spanish real estate boom that began to explode in 2008. Deutsche Bank sold a mortgage that year with a minimum spread of 0.17%.

The situation has turned 180 degrees with the benchmark index par excellence for Spanish mortgages close to -0.5% (see graph). The number of credits that –only in theory– would yield negative interest rates has skyrocketed. But financial institutions do not give, at least for the moment, their arm to twist and refuse to pay their clients or deduct interest from the capital.

“The new mortgage law determines that interest rates cannot be negative, by specifying something that is already in the nature of the loan contract, where an interest rate has been agreed as a counterpart to the financing obtained,” says José Luis Martínez Campuzano, spokesperson for the Spanish Banking Association (AEB).

It is true that one of the articles of the rule that came into force in June of last year specifies that the “interest […] it cannot be negative ”. But legal sources indicate that this law only applies to contracts signed from the 16th of that month. This article is not retroactive. “It would be necessary to see each contract and see if a floor is marked at 0%”, they add.

Patricia Suárez, president of the Association of Financial Users, Asufin, explains that they have verified that “most of the entities subtract the Euribor or negative Libor from the differential, but apply a floor clause of 0% that lacks legal protection”. “In fact, it is precisely the low interest rates that led the banks to exert their influence to establish a zero floor in mortgages and avoid claims,” ​​he adds. The Bank of Spain clarifies that there is no regulatory novelty on this issue.

Financial sources point out that charging to borrow money is a contradiction in terms. But this has been happening for years in European sovereign debt and even in corporate issues.

Some private banking segments, in addition, already charge their clients for having the money deposited in their accounts if they exceed a certain threshold. Inversis, for example, has been doing so since October 1 for balances that exceed 1.5 million euros.

GVC Gaesco was one of the first entities to apply this measure to individuals, as published by CincoDías on April 15, 2019. It argued that the ECB charges it 0.5% for leaving the money in its safe.

The documents collected by Asufin reveal that, except for some specific exceptions, the entities do not pay for their mortgages. Deutsche Bank, which has been affected by the situation for years in its aforementioned product, does not do so either, as confirmed by a spokesperson for the entity. The situation is devilish. If the spread (0.17 percentage points) and the Euribor were added without more, this loan would generate a positive interest for the client of about 0.3%. A loan with a 0.37% spread such as the Young Mortgage marketed by Caja Madrid –now Bankia– in 2008 and 2009 would accrue around 0.1%. In both cases, much more than what deposits offer.

The average interest rate on new deposits in less than one year stands at an almost negligible 0.0220%, according to the latest data from the Bank of Spain, corresponding to last August.