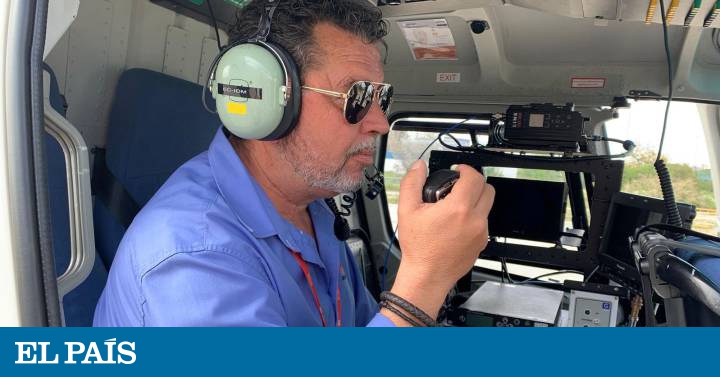 At the age of 16, he earned his first pesetas recording the football matches in which the bars of his city, Elche, played and selling the video cassettes of those pachangas. At 18 he dedicated the free afternoons that the military gave him to tell the rest of the world, through his camera, the lead years of ETA. At 21, he was already at war: he left for Kosovo to continue capturing the stark reality, something he would do for the rest of his life, even amid the bombs. At 51, Diego Miralles has seen (and recorded) everything. In his arms, the Galician reporter José Couso died in 2003 after the US army attacked the Palestine Hotel in Baghdad (Iraq). The following year it was seen removing dozens of corpses that the water dragged against its antennas to continue emitting the disaster caused by the devastating 2004 tsunami in Indonesia. When he couldn’t take it anymore, or didn’t want any more, when his vacations, what he calls vacations, “going home”, became more complex, when his daughters began to look askance at the bulletproof vest that he placed next to the door Before leaving for each expedition, Miralles chose soccer again. Now he is the director of the special cameras unit of Mediapro, the producer of LaLiga broadcasts, a kind of illusionist who creates the most spectacular shots of matches that reach 600 million people, such as ElClásico this Saturday. “I went from telling what nobody wants to see to excite everyone.” A message that the organization itself reinforces for the next Real Madrid-FC Barcelona with a campaign that will take the game to the most remote corners of the planet.

Miralles is the only technician who won an Ortega y Gasset journalism award. It was for his coverage of the Iraq war in 2003. “There, a bombing destroyed our vehicle and left all our equipment under rubble. I stopped a van, bought it on the spot, we rescued all the cameras and assembled a mobile unit in a few hours, ”he recalls. With that same skill, the one that only war can give, “the one you acquire when a bottle of water a day has to be enough for you to drink and wash,” was building the LaLiga special cameras department that he now directs at Mediapro. A kind of laboratory that tests different artifacts until it finds the perfect shot and the right image quality. “When we test a new camera we have to adapt it so that it broadcasts with the level and signal we need,” he explains.

Their special cameras take the viewer from their living room to unusual places on the playing field. To achieve this, Miralles coordinates a team of 60 people who are deployed throughout Spain every weekend. “Only we can take you flying with our helicopter. We start from a premise: inform, excite and excite ”, he says. “But we have had to learn to train our technicians. Many of our cameras are new to professional use. It was a real challenge.” Helicopter, aerial cameras supported by pulleys, drones, super slow cameras, cranes behind the goals, mini-cameras in the networks … His latest jewel, a “cinematographic” camera at the foot of the field, allows any fan to feel that he is embracing himself with his idols. “During the worst part of the pandemic we even had a robotic camera at the foot of the field, operated remotely, to prevent players from having any type of contact with people outside the game,” he says. “For ElClásico we deployed all our resources.”

Miralles keeps hundreds of photos of the wars that he never published. Hardly anyone has seen them. It is the album that unites you with horror and with an experience that will mark you forever. Iraq, Couso’s smashed cameras, his room key. Palestine, the arrival of the remains of Yasser Arafat, Kaláshnikovs everywhere. Colombia, a gathering of FARC guerrillas in the jungle. Sudan, Sierra Leone… He saw and lived the worst. “I can’t pass it on to someone who hasn’t been there,” he says. He still remembers the tense silence in Iraq after each bombing. The dark calm. Then the crying. “Anyone who has been in a war and has not felt fear is lying,” he says. “Many of the images we have recorded have never been broadcast. In the end, the minute and a half that people consume and take away from a war is not exactly what happens there ”.

At a time when, he says, content prevails over quality, in which “anyone with a mobile phone opens a news program”, Miralles reflects on the role of reporters. “Unwrapping anywhere in the world with almost 400 kilograms of technical material has never been easy,” he says. “The images opened the newscast, without a voiceover or anything. They had to speak for themselves ”, he analyzes.

Three decades after his first departure to Kosovo, the spirit of his work remains. “In the project we have now with LaLiga, we try to transfer what nobody sees and give that unattainable access to people who like football. You don’t fly, but my camera does; you can’t see through the hole in the net, but my camera can; you’re not going to be running around the band, but my camera is ”.

It’s Wednesday and Miralles is already in Madrid to finalize the details of this Saturday’s ElClásico. His ninth or tenth in these four years in charge of LaLiga’s special chambers. Another unique match. Like the one who, in the middle of the war, struck between the bombs in Iraq. To calm the spirits, he mounted an antenna with which to capture the signal from a Real Madrid-Barcelona. “Bombs were falling and we were watching a game!” Almost two decades later, he is convinced: “People are having a very bad time. If now I can help you to relax for at least 90 minutes and disconnect, blessed the effort that we have made with this grain of sand that are the special cameras… ”. He is the man who brings ElClásico to the whole world.

LaLiga emphasizes that this Saturday’s ElClásico, which will take place at the Alfredo di Stéfano stadium from 9:00 pm Spanish time, will be seen “all over the world”. Since this season, Real Madrid-FC Barcelona can be seen in every corner of the planet and that is why LaLiga has waved the match flag at 15 points marked on the map that represent the diversity of the locations from where this high-level football can be enjoyed. flight. 15 unique ways to experience a game From the Uyuni salt flat in Bolivia or Niagara Falls in Canada to the Turkish hot air balloons in Cappadocia or Mount Asahidake in Japan. The flag will also reach: Egypt, Angola, Mauritius, Nicaragua, Indonesia, Brazil, Malaysia, Ecuador, Thailand, Denmark and the United States.

On Mount Bromo in Indonesia, on Lake Eibsee in North Rhine-Westphalia in Germany, in the World Heritage city of Samarkand in Uzbekistan and in the Masai Mara nature reserve, with a mass tribe from the village of Boma In Kenya, LaLiga has set up four lounges to convey the emotion of the match. “We want to launch a very specific message: ElClásico is a worldwide phenomenon and can be enjoyed from anywhere,” explains Juan Girón, manager of Advertising and Brand Content of the organization, in charge of the campaign.

LaLiga’s 22 international social media channels have been posting extraordinary content during the week leading up to the match and will broadcast relevant information about the match live to more than 130 million fans around the world. On the street, in nature and on mobile phones: ElClásico is present everywhere.