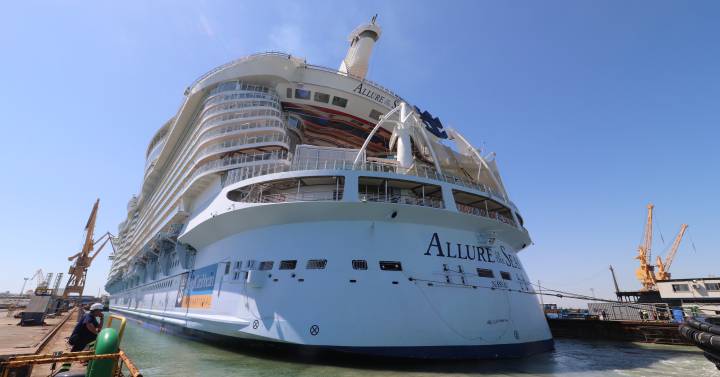 Just as the population was confined during the state of alarm caused by the pandemic, many ships, commercial and military, also had to cease or alter their activity. But in the naval industry there are two kinds of business: if shipbuilding has a wide and long-term horizon, the opposite happens in the repair market, subject to the immediate and the unforeseen. For this reason, during the confinement and in the subsequent opening months, Navantia, one of the giants of civil and military naval construction, has maintained this service in shipyards throughout the Peninsula to avoid the paralysis of maritime activity.

The company works with commercial vessels and private vessels, but above all it operates in the military field. Navantia, whose history dates back to 1717, when the Minister of the Navy at the time, José Patiño, built the first modern shipyard in Spain, manufactures and repairs armored vessels, marine colossi up to 500 meters long; frigates with science fiction technology; submarines; aircraft carriers that are minicities …

Among the most important ships it is in charge are those of the Spanish Navy, specifically those enlisted for operations Balmis (a global mission against the coronavirus) and Atalanta (which fights piracy in the Indian Ocean), whose jobs are considered essential and that they were attended even when the state of alarm was decreed. Other ships, surprised by the arrival of confinement in the company’s docks – the ship repair facilities – of the company, were also taken care of, whether the work required was long-term or seasonal.

With the progressive de-escalation, the return to activity was carried out following an occupational safety protocol to adapt the facilities to the new normal. Likewise, Navantia, and with it its multiple associated companies, have enabled continuous communication channels with clients and remote work systems. According to the company, this work logic has been essential to solve the problems of confined ship crews, a common scene on the news during the state of alarm, or of ships whose schedules were altered by the crisis.

The naval repairs area is experiencing a time of strong competition. A dynamic sector subject to market fluctuations, explains the company, in which filling the gaps of postponed projects seems vital. Even more so to revitalize the economy of territories with a naval tradition such as the Ría de Ferrol, the Bay of Cádiz or Cartagena, whose local economy is closely linked to this industry.

“We have managed to overcome the gap produced as a result of the cancellation and rescheduling of the maintenance plans of our clients thanks to an intense commercial and budgeting work, so that, today, the large docks of both Ría and La Bahía have reserves covering the medium term “, explains Lucía Poole, Director of Repairs at Navantia. “Now we are working to occupy smaller dams, whose size always complicates hiring a little more, but we are adjusting rates to achieve it.”

In the cruise sector, one of the most affected by the situation, the planned maintenance works have been reduced until the situation reverses. The stranding works, in which Navantia has a greater intervention, have been affected to a lesser extent.

In this reactivation two different scenarios are opened: the military segment and the conventional merchant segment. In the first, Navantia foresees that the maintenance plans of the Spanish Navy and the US Navy will be maintained so that the productive activity linked to the maintenance of both fleets will not be affected by the pandemic. In other words, they are ships that will stay and continue to be cared for and repaired.

In the market for conventional ships, a work front opens, says the company. It is necessary to combat the stoppage caused by the crisis, materialized in a lower demand and a fall in prices. To do this, Navantia is adjusting its services and offers in order to keep its docks occupied. A task that, says the company, is already bearing fruit in the form of new medium-term contracts.

With the experience of the economic and health crisis in the background, Navantia’s long-term mission focuses on two fields: leading the digital transformation of Spanish industry and working for the sustainability of the planet in line with the 2030 Agenda and the Green Pact European.

Europe is on a sustainable mission. As many experts announce, the way out of the crisis will be green or it won’t be. With this aim in mind, Navantia is promoting the Waterbone initiative, a program in which actors from the naval industry (shipyards, shipowners, logistics) work to develop and define safe propulsion methods, free of polluting emissions. Hybrid systems in ship propulsion plants, energy recovery and storage methods and the use of alternative fuels, such as liquefied natural gas or biofuels, are some of the solutions that are being explored. The initiative is part of the European Green Pact, a roadmap to tackle climate challenges and move towards a circular and decarbonized economy.