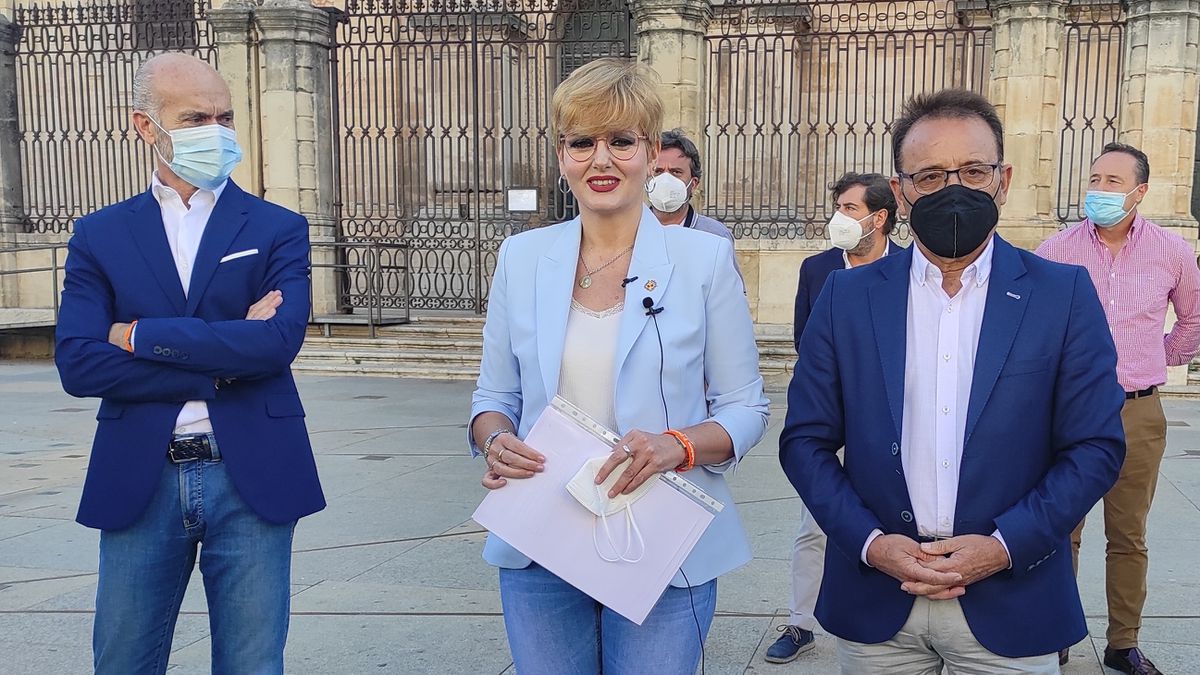 The three councilors of Citizens who have decided to leave the municipal government of Jaén have confirmed that in recent days there had been contacts with the PP to present a motion of censure to evict the PSOE from the mayor’s office. That motion has been frustrated after the decision of the mayor of Cs María Orozco, current head of the Treasury, not to follow in the footsteps of his colleagues and remain in the Citizens group. Both the mayor of Jaén, Julio Millán (PSOE), and the regional leader of Ciudadanos, Juan Marín, have guaranteed stability in the Jaén City Council, where the PSOE (with 11 representatives) will have to rely on the only mayor of Cs and on the two councilors of Adelante Jaén to obtain majorities.

The wayward councilors of Cs, María Cantos, Francisco Díaz and Miguel Castro, all of them at the head of important areas of government, will not abandon their act as councilor and will become part of the group of non-attached members after their party has already announced that will open an expulsion file for them. Cantos, who was second deputy mayor, has indicated that the PP (with eight councilors) encouraged them a few days ago to present a motion of censure against the PSOE, a motion that to prosper would also need two other councilors: one from Vox and another suspended from membership in that party.

The general secretary of the PSOE of Jaén, Francisco Reyes, has lamented the political instability generated by these three municipal politicians. For the socialist leader, this operation “was part of a strategy to make María Cantos mayor with the support of PP and Vox.”

“We are leaving for dignity and principles”, has intoned María Cantos to justify her departure and that of two colleagues from the Jaen municipal government, when just a few days have passed since the PSOE and Cs publicly valued the “good health” of the pact of government. The mayor believes that the abandonment of these three councilors is due to partisan purposes. “Private interests can never be above the generals of Jaén,” Julio Millán stressed.

The wayward councilors argue that they have left Cs in defense of the interests of Jaén. Cantos has once again alluded to the “abandonment” suffered by the capital of Jaen by the central government in the non-concession of the Army logistics base, Colce (finally granted to Córdoba), or the European funds of Integrated Territorial Investment (ITI) , which are managed jointly by the Central Executive and the Junta de Andalucía. “We have not broken the pact, it has been the PSOE for its breaches,” said Cantos, after pointing to the “lack of definition” of the PSOE “in the face of the grievance so unworthy of the Government of the nation” towards Jaén.

“We have not endured any more and now in the middle of the mandate it was time to take the step and that we have done, the spark has to jump because the situation was unsustainable,” stressed the municipal spokesperson for Cs so far. He has also charged against those currently responsible for the orange formation. “They have not treated us as they should have treated us,” he indicated when asked about the role of the regional coordinator of Cs, Juan Marín, in this crisis. Marín has called “erroneous and absurd” the departure of the three councilors while criticizing the “strategy that some have to divide Citizens, for trying to show a face that is not the real one.”

Cantos has denied having received calls from national leaders of the PP inviting them to join the popular ranks. Nor does he claim to have spoken with Fran Hervías, former secretary of Cs Organization and recent signing of the PP, who was the one who in 2019 signed Cantos as head of the Cs list to the mayor of Jaén. However, asked about his political future, Cantos, who came to municipal politics from the neighborhood movement, has not ruled out that in the 2023 elections he may be part of another candidacy.

The staging of the rupture in the Jaén government has coincided with the day on which the termination of the old tram agreement was signed, a previous step for the entry into force of the new agreement reached between the Ministry of Development and the City Council of Jaén to reactivate this infrastructure that has been in disuse for a decade and abandoned in the garages. In the photo of that firm, and in the one of the visit to the tram wagons, the wayward councilors of Cs have not appeared, who on several occasions attributed the agreement to recover an investment of 120 million as a victory for the orange formation of euros.