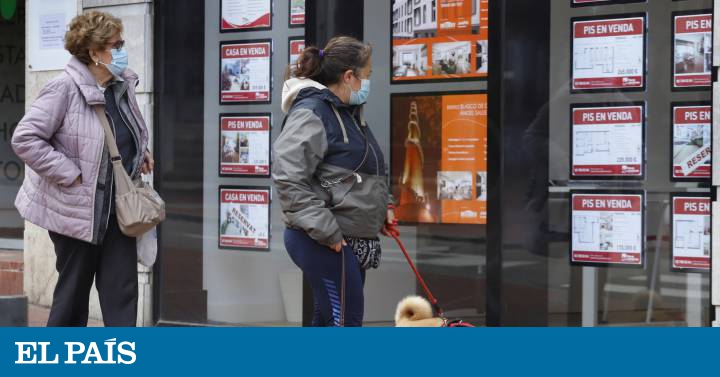 As long as the monetary policy of the European Central Bank (ECB) remains unchanged, the index to which mortgage interest rates are linked will remain stable at very low levels. This is the experts’ forecast for the Euribor, whose monthly average – in the absence of Friday’s data – closes April at -0.483%, just 0.4 basis points above that registered the previous month and very close to -0.505% to which it fell in January, its all-time low. A Euribor on the ground not only directly affects variable interest rates, but also pushes the cost of fixed mortgages down, on which both banks and their clients are betting heavily.

What is obvious at first glance is just how cheap variable mortgages have become. The Euribor – in negative territory for more than five years – subtracts instead of adding with the differential applied by banks when calculating the mortgage interest rate. Thus, on the one hand, the variable mortgage loans that were signed in February through the bank comparator iAhorro had an extraordinarily low average nominal interest rate of 0.69%.

On the other hand, the mortgaged that now have the annual review of their loan will see their quota significantly reduce, due to a decrease in the Euribor of 3.7 tenths of a point compared to April of last year, when its average was -0.108% . Therefore, in the case of a mortgage of 150,000 euros for 30 years with an interest rate calculated with the Euribor plus a differential of 0.99%, the monthly payment will go from the 474.31 euros that the user paid in the last year to the current 450.76 euros. Which translates into a saving of 282.60 euros over the next 12 months, they calculate in iAhorro.

In an environment of such low interest rates, banks are offering fixed mortgages at an increasingly advantageous cost, in an attempt to ensure long-term secure profit margins. The offer seems to have found a demand that already discounts the rise in the long-term Euribor, to such an extent that the proportion of fixed mortgages that were signed in February rose to 55% and the variables fell to 45%, according to the INE. These data contrast with those marked the same month of the previous year, when fixed mortgage loans accounted for just 37.4% compared to 62.6% for variables.

Fixed for the long term

“The current context remains unbeatable to achieve good long-term conditions. We are practically still at historical values ​​with the Euribor and there has not been a restructuring of this type of offer in this time. Given this situation, variable mortgages have become an interesting product for shorter periods of time “, underlines the director of Mortgages of iAhorro, Simone Colombelli, who adds:” The second quarter of the year is usually very powerful for the real estate sector , so that, in all probability, we will also experience an increase in the volume of mortgage operations with a stable Euribor in spring, without strong rises or falls ”.

Along the same lines, for Joaquín Robles, analyst at the financial broker XTB, “the Euribor will remain around -0.50% or -0.45% throughout this year.” Last week, in her appearance after the meeting of the Governing Council of the ECB, its president, Christine Lagarde, pushed away the idea of ​​a rapid withdrawal of the expansionary policy implemented by the supervisor to revive the economy in the midst of the coronavirus crisis : “We have a long way to go to cross the bridge of the pandemic and that the recovery is sustainable and solid,” he warned. That is, the stimuli to governments and those directed to banks will continue until March and June 2022, respectively, and it is not ruled out that they will last longer.

In this way, “banks can borrow more money at -1%, an advantageous interest rate, but their problem is that they have a lot of excess liquidity, because the demand for credit is still very contracted,” says Robles. In this context, as the Euribor is the interest rate at which European banks lend money to each other, it would not make sense for them to do so at a higher price than the one charged by the ECB to keep excess liquidity in their coffers, that is that is, that 0.50%, since the guarantees offered by the supervisor are insurmountable.

When the situation changes, the index will start to rise. “Despite the fact that we think that a strong economic rebound will be generated by the end of the year, perhaps the recovery in Europe will take a little longer to arrive than in other economies, so for the moment we are still really without much change,” he concludes Oak trees.